Word Sound Power presents Blood Earth (Trailer) from Kush on Vimeo.
The members of Word Sound Power are musical and cultural interpreters, although they may not think of themselves this way. They work with revolutionary musicians who reside outside of our affluent urban frame, and bring the protest songs of those musicians to our ears.
The Word Sound Power team both curates and contextualizes the sounds, songs, and struggles of rural India’s people’s movements. We last heard from Word Sound Power on their collaboration with Bant Singh, the Punjabi farmer who faced violent reprisals for his pursuit of a court case against powerful members of his village who raped his daughter.

The latest Word Sound Power project, Blood Earth, goes east to Kucheipadar, Orissa. The team collaborated with artists involved in the protest movement against the human displacement and environmental degradation that has been a hallmark of bauxite mining in the region. Word Sound Power consists of three members. Taru Dalmia, better known in musical circles as Delhi Sultanate, steps away from his roles as Ska Vengers vocalist and BASS Foundation headman to take up emceeing duties for the group. His lyrics, performed in his signature patois, are stronger than ever.

No longer focusing on injustice as a broad concept, he now approaches incidents of state sponsored violence head on, the specificity of his language rending his message increasingly potent. Brooklyn born DJ and producer Chris McGuiness accompanies Delhi Sultanate’s staccato rhymes with dense and richly atmospheric beats. The songs swirl with echoes of dub and dancehall, awash in the reggae staples of reverb and delay. But the sparse nature of dub production allows Chris McGuiness to layer the beats with organic elements that root the songs in the tribal village in which they were recorded.

Crickets, rain, human voices, and animal noises all come together to remind the listener that the dancefloor and the village needn’t be so far apart. Most importantly, the instruments and voices of the protest singers of Kucheipadar are given space to be heard. Decontextualized from their original setting and meaning, they remain powerful reminders of injustice. And Word Sound Power is more than just a music project. 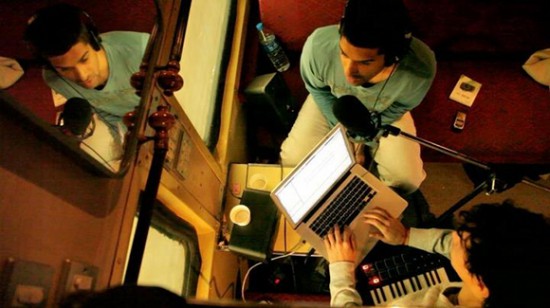 Chris McGuiness and Delhi Sultanate recording in a train in India

The group’s projects are recorded on video by Kush Bandwar, a photographer and videographer who provides a visual context for each work by directing and editing short documentaries. These documentaries make the work, sung in this case in Oriya and Kui, a local tribal language, accessible to an outside audience.

Much in the same vein as the Delhi Sultanate’s verses, the film component of Word Sound Power acts as a call to arms. The Blood Earth exhibition will incorporate the collaborative efforts of the team, bringing together images, both moving and still, with the musical fruits of the project, as well as atmospheric sound designed to recapture the environment of Kucheipadar.

The exhibition will take place at the Siddhartha hall of the Goethe-Institute/Max Mueller Bhavan from July 21st through July 28th, and will be open from 10:00 AM through 7:00 PM, and is open all days except Sunday and public holidays.