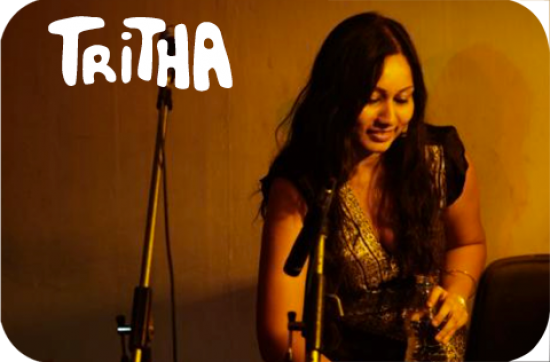 Tritha’s promotional materials refer to her music as “hindustani trip-hop”, and you can’t fault her for the perhaps too reductive description. We all need an easy to digest tagline, and “franco-madrasi-bengal-electro-folk” hardly rolls off of the tongue.

Like many of the artists featured here at Border Movement, Tritha can be difficult to shoehorn into one genre or narrative. Bengal born, Chennai raised, trained in Hindustani classical, and currently dividing her time between India and Europe, the polyglot chanteuse draws on a breadth of musical traditions. Geography aside, Tritha consistently straddles the line between acoustic and electronic, incorporating laptop loops and electronic production techniques into music that is fundamentally grounded in the interplay between a traditional band and her voice.

This wealth of influences can leave the listener surprised; half a track might go by before you realize that the late 1990s hard rock sounding ballad is actually being sung in Sanskrit. But when the realization arrives, you’re unlikely to complain.

But perhaps the defining characteristic of Tritha’s music is the joy she takes in sound. Whether electronic or acoustic, she brings playfulness to the studio, picking up and putting down percussion, almost as if she merely wants to see what a given object might sound like on the microphone. Her love of sound comes through, and the experiments often pay off.

Tritha will be releasing a solo album later this year.