“My brain is not working right now,” Ardeshir tells me. She’s been busy trying to figure a way around her visa situation all day, so it takes her a minute to calm down. BMR is still a while away, but she has a fairly clear idea of what she wants to do once she reaches Berlin. There’s a couple of things she has her mind set on. “One,” she says, “is to get into a studio, scattered over the timeline of the two months, and to have several recording sessions with local musicians, and create my own library of different instruments and sounds.”

Not just in a studio, in fact, but at all sorts of different locations, to get a range of acoustics and room sounds. She wants to work with traditional instrumentalists, modular synth players, anyone she can find. Further, she’s keen on doing live sessions with multiple artists performing together.

In a nutshell, she wants to play the role of “producer/director”. It’s something that’s worked for her in the past, and she wants to replicate it. “Thematically, I want to use the new geography, to build ‘X’ library of ‘X’ city. Or at least my version of it, supplemented with found sounds and field recordings. I might use it to work on an EP or an album or a sonic essay. When you’re in a place, the wise thing to do is to collect. That way, you have it with you, even if you may not finish anything.”

The other thing, she says, is to perform an alternative set of hers, using the piano as the centre-piece. It’s something Ardeshir’s been working on for a couple of years: a raw, improvised set with lots of experimenting. “Maybe if I’m able to manage,” she says, “I’d like to sift off to different kinds of pianos. And move out of the synthesiser bank I’ve been using. Maybe get a modular setup, hardware, effects unit, you know.” For reference, she cites Nils Frahm. 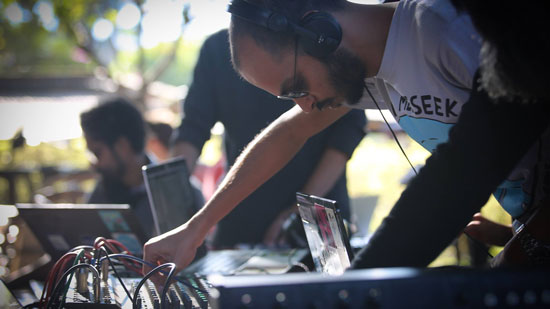 Ardeshir heads to Berlin in early July, so there’s time. Alien Panda Jury, on the other hand, is already there. Daniel Arthur Panjwaneey has been in Berlin for six days (at the time of writing), and he’s still figuring things out. “The first three days, I was pretty tired and I didn’t get out much,” he says. “I didn’t think three hours of jetlag would affect me that much, but it has!” Since then, he’s been busy setting up a temporary studio at the first of two apartments he’s going to inhabit over the next two months.

Panjwaneey has a long and colourful past as a musician. With Alien Panda Jury, he writes frizzy, chaotic, unsettling, hypercharged electronic music, but it wasn’t always thus. By the age of 16, he was playing the bass in Messiah, a popular metal band in Karachi. Upon dissolution of the band, an unsatisfying stint playing covers followed, which left him disillusioned and inactive for a couple of years. He, along with Toll Crane (Talha Asim Wynn), then started a spectacularly-named improv band called LBDN. Or Look Busy Do Nothing. “It was never a structured performance,” he says. “We’d improvise for an hour and nothing else.” They discovered My Bloody Valentine and a lot of other music, which resulted in the creation of cult shoegaze band orangenoise. At some point, they realised that they couldn’t always depend on each other to constantly write music, each of the band members branching out into solo work and Panjwaneey started writing as Alien Panda Jury.

He’d visited Berlin a year ago, for the Karachi Files gig, and had noticed first-hand how strong the scene in the city was, which has been further magnified during (the still-early days of) the residency. “In Karachi, there are no bars, no clubs, everything is super underground, set up in a DIY way. Here, people are curious about new music. You can tell that the locals are… I wouldn’t say ‘dulled’, but they’re past the whole techno era. They’re constantly looking for newer sounds, which is why South Asian rhythms appeal to them,” he says. He wants to bring that to the table in his time there, but he’s also hoping for some kind of an interchange of aesthetics, where he can bring in new influences into his sound.

He of course plans to meet with lots of local artists and collaborate with them. The multiculturalism of Berlin’s been written about enough times before, and Panjwaneey is hoping to make the most of these opportunities ahead of him. “I have the freedom to do whatever I like,” he says. “It’s very open; there’s no fixed structure. So far, it’s been pretty laid back. There’s no pressure as such.”

He’s already managed to write some scratch tracks, and he’s excited with the dark direction the music is taking. He’s keen on writing a small collaborative EP during his time, while also working on more structured music of his own. Mirroring Ardeshir’s intentions, Panjwaneey too talks about recording and gathering as many samples and sounds as he can, where he can “hold on to a goldmine of sound”. Further, Panjwaneey organised the first edition of a festival, called Sine Valley, in Kathmandu last year, and he hopes to seek out experienced heads who can give him direction on how to set up a festival, find funding, and help out with curating the whole cultural experience. 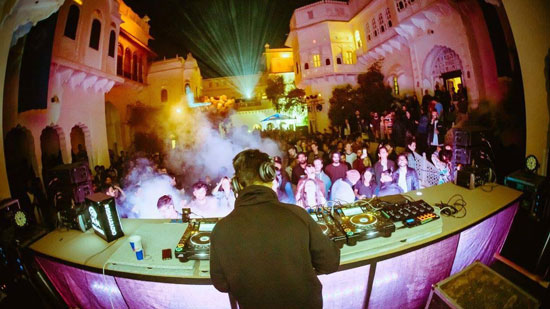 Three and a half months to go

For a dozen years, Sanil Sudan has been involved in electronic music in some capacity or the other. He’s been DJing for as long as he can remember, and began writing somewhere along the way. He’s worked in the left-brain part of the industry as well, as an artist manager for the Delhi-based agency UnMute. His latest project though, called FILM, is where he’s truly found himself. “It’s been my whole obsession,” he says, “to find new music and just play it. I wanted to write cinematic, expressive music. I’ve had multiple phases in the past: clichéd tech house, drum and bass, everything. It took me a long time to discover what I’d like to write, to put my own name on. I was never the kind of guy who wanted to put out music for the heck of it.” He released an EP earlier this year, called ‘Hope’, via Qilla Records — which has an understated moodiness to it, driven by sounds of the xylophone and mallets (the joys of which he recently discovered) and deep percussions.

It’s obvious given the name he’s chosen for this project — FILM! — but there’s a strong visual quality to Sudan’s music. He is interested in film scoring but, in addition, his music is also informed by a far more leftfield influence. Sudan was a fervid gamer in a past life, to the point where he’s travelled internationally to take part in gaming competitions. Counter-Strike, Unreal Tournament, he has it all in his repertoire. He even used to test games for THQ, the people behind those addictive Smackdown games. He has followed the evolution of game music, and has developed an understanding of the limitless possibilities the form offers. In fact, the idea of sound design, for the longest time, interested him far more than making ‘tracks’ as such.

For Berlin, Sudan is still in the process of researching and planning, although he wants to find a way to somehow find a cultural harmony in the work he finally decides to do. Adding to the excitement is the fact that he’s a major history buff: “I want to take a piece of history,” he says, “and translate it, somehow, in my own way.”