It’s an odd kind of dichotomy that drives Theresa Stroetges. She’s hyper-prolific, juggling multiple musical and creative identities, constantly writing and creating. “I feel almost like, the more I do, the more inspired I am. The less time I have, the more productive I become. It’s strange,” she says over a Skype call. When we speak, Stroetges is in Kolkata, India. She’s been there a few days, playing with local musicians and forming a “residency band” of sorts. She’s visiting India for the BMR South Asia residency — spread over a period of two months — for which she’s focussing solely on her solo project called Golden Diskó Ship. Stroetges heads to New Delhi next, and she’s also slated to perform at the annual Magnetic Fields Festival in Rajasthan in December.

It’s hard to capture the spirit of her work accurately; to pinpoint exactly what her musical identity is. This is because there’s really a lot that she ends up doing. There’s the solo work to begin with, which she’s put three full-lengths out and a split LP; she remembers her first concert was in Berlin in 2007. There’s Soft Grid, an experimental, psychedelic band she’s part of. Epiphany Now is an ambitious collaborative, audiovisual, improv project she’s a part of. She does a lot of collaborations with artists and filmmakers, and she’s also set to do the sound for a dance piece in Berlin, for which she’ll be performing live and playing off the energy and movement of the dancers. She glides around genres and music styles effortlessly, almost relentlessly, and is as much a musician as she is a ‘sound artist’.

While a lot of her collaborative work is reactive — a result of the chemistry she shares with the artists around her — Golden Diskó Ship is driven entirely by her own creative impulses. Beyond the songwriting itself, Stroetges also takes care of the visual identity of the project, from the music videos to the light shows and set designs at concerts. She doesn’t often get time for herself, but she’s excited to spend the residency writing for her solo project. “It’s been really nice this past week in Kolkata, where I’ve had time for Diskó Ship. When I start, it’s like a blank page. Everything happens from inside me. All the other projects are extensions; they’re me going outwards. But Diskó Ship is introverted,” she says. 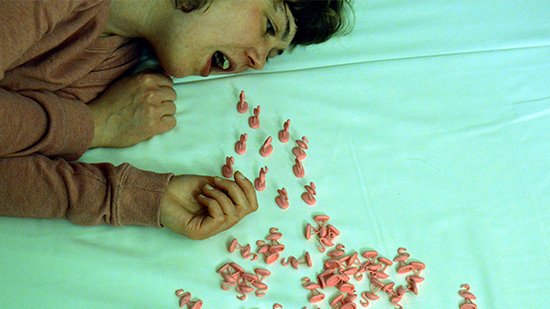 The sound she’s arrived at, over many years of exploring and experimenting, lies in the faint space between experimental and pop music. She’s on the edge, being perhaps too experimental for pop music, and too poppy for the more experimental scenes. It’s an exciting place to be. “I like working on this edge between the two. When I have to label it, I call it ‘experimental pop’. Something neither too poppy nor too abstract, just somewhere floating around.” The music incorporates a lot of diverse influences: cold electronic soundscapes, rock ‘n’ roll departures, guitar lines underpinning soft melodies, passages of dissonance, autotuned vocals. But at the heart of it all lies Stroetges’s commitment to crafting a catchy song; the core of her music, perhaps, is melody-driven pop.

Everything on the songs is recorded by her, and she can play the viola, the guitar, bass, synths, a bit of drums. She looks at it from an improv or punk point of view, as she gets fascinated by a sound or instrument, and messes around with it to reach some kind of a voice. “I think because it’s a solo project,” she says, “I have all the freedom in the world to use every influence that comes to me. I’m very interested in a wide range of music styles. You know, how that keeps changing. I’ll hate something today, and then four years later, suddenly I’m like, ‘Oh, I like this kind of music!’ It’s a little bit of my personal styles and my journey through the world of music. I try to be very open to all sorts of things I have the chance to hear. Then I mix it all together!”

This approach extends also to her creative pursuits outside of just the music. There’s a strong sense of ‘performance art’ to Golden Diskó Ship, in fact. From the design to the lights to the presentation to even the music videos, each element is carefully aligned with the other. The video for ‘Wrong Beach’, for example, has an extended guitar-and-voice section which is shot from inside an aquarium, as possibly a glimpse into the lives of the fishes on display for stray passersby to gaze at and admire. “I like to think of how you can explore more ways of performing and experimenting with the music. I’m really interested in combining sound with other forms of art, into immersive experiences,” she says. “Visuals is just one feasible step for me. I think there’s also a little bit of influence from my socialization into 90s music; music videos were big in that era. You have a visual element, and a sonic element. And both of them become more than the sum of the parts. That extra magic happens.”

The aesthetic itself is simple and minimal, and often off-the-cuff. A lot of the footage she ends up using is shot randomly, with no real end goal in sight at the time. “I’m not very techy, I’m not aiming for this kind of contemporary…nerdy kind of visual element. I use it in an intuitive way, where the imagery underlines the music, makes it stronger. It’s all footage of things in my life, which makes it quite lo-fi, and personal in a way. All the things I’ve experienced. Most of it isn’t planned, I just have all this stuff as an archive.”

Stroetges started off young. She began learning the viola formally at the age of six. As she grew up, she incorporated further influences in her repertoire, getting into pop, indie, rock music, “whatever was around in the 90s”. She’s played in bands, in orchestras, in collaborative experimental projects. She learnt the guitar as well, and even studied musicology in Cologne. Originally from a small town in Midwest Germany, she moved to Berlin in 2006, which is when she began writing as Golden Diskó Ship in earnest. “Somehow it’s a good place, it’s a good place to start. People are very encouraging, there’s a lively underground scene, and it’s not difficult to try out something new.” That, really, is at the heart of everything she does. Now, 12 years later, at 35 with many releases and radical musical projects under her belt, the one thing that seems to define Stroetges more than anything else is perhaps this commitment to constantly try out something new, something different.

written by Akhil Sood
images curtsey of the artist