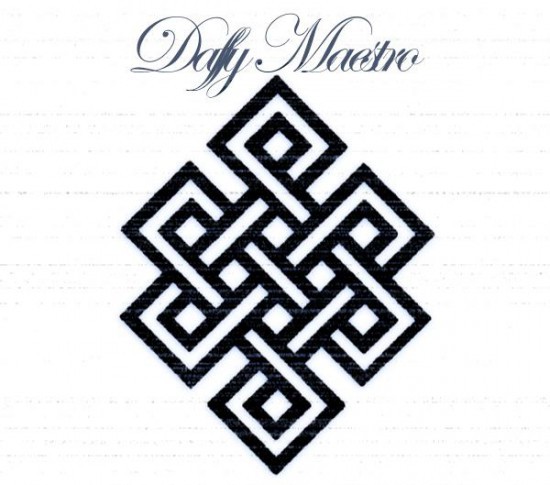 Daffy Maestro, or Stro as they call him, is a bit of an enigma: Seemingly more prolific than his Sri Lankan counterparts, there is free flow to his music, an almost analog warmth that overawes the tinny 1-0-1-0 of the digital revolution. He has range too, from lo-fi noodling and ambient to (what our ancestors used to call) trip-hop.

“Jester of the House” sounds like Moby channeling Boards of Canada and the Microphones, a little short of either’s finesse. “Smile” is a basket of strings, horns and sliding synths that tries to create a budding tapestry similar to the eternal knot (pictured above). It’s accompanied by lightweight snares that make it sound like an unfinished live take. Like many of his tracks, it’s not mixed to perfection, but that’s part of the charm. “Chair” contains warm double-bass combined with somewhat overstated strings. If one is unsighted, the border between Bonobo and Café del Mar can be a murky one, and Daffy should do well to stay closer to the former.

    In an ideal world, Stro should be headlining artsy evenings at Colombo’s Barefoot (or at least playing the Side Room). But he seems a bit removed from the scene, instead quietly and independently making music since the last decade. Kandy, the country’s multi-layered hill capital where he hails from, seems to influence his similarly layered music. Then there’s the disarming honesty too: “I finished my first track called “Greatness” (it wasn’t great), 8 minutes long trip hop song which was mixed and mastered using computer 4.1 speakers…”

”… I realized how cool is it to make your own music like Dr Dre, Moby, or 9th wonder… those guys are super heroes. Then the journey began. I started off with FL Studio 2.0, the most versatile DAW I’ve ever seen in my life.” Daffy encompasses everything expected from a budding producer: his aim true, his infatuation with the craft sincere, and his head sincerely in-the-clouds.