Described as virtuoso percussionists, Fat Gold Chain comprises two men who are indeed virtuoso percussionists: Jacob and Kanchana are classically-trained in drums hailing from western Sri Lanka to West Africa, from Dun duns and Breketes to Thummatum. They are also not-so-classically trained in vintage synthesizers and drum machines housed in a padded homemade cell. These two Ghana-trotting, Amaradeva-sampling outlaws hail from Melbourne and Colombo respectively, and are somewhat tried-and-tested hands at the music thing, from playing Australia’s St Kilda and Coburg Music festivals to alongside folk-rock hero Ash Grunwald at WOMADelaide.

“Ngoney Money” starts out as a nifty guitar loop which gradually gets more chaotic as it progresses, with an assortment of drums and wobbly basslines entering the mix, then concluding with the infectious repetition of a tribal chant. Yet the most engaging aspect of Fat Gold Chain may not be their strength in drums, but their ear for

      pop hooks. Memorable pop music is the hardest to pull off, and Fat Gold Chain dive straight in to the deep-end with their rhythmically alive yet concise, 4-minute excursions: “Spinning Blade” combines live drums with warm synth work vaguely reminiscent of a nostalgic love affair. “Visa” is another standout, its taut design and hauntingly nostalgic backdrop faintly recalling Tin Man’s finest techno-pop work (think “Scared” or “Stand by Me”). However, the track loses some of its understated tension and aura, as the overtly prominent vocals kicks in during the second half—something the duo will have to be mindful in their future work.

It seems Fat Gold Chain have good musical pedigree, a diverse array of influences and a mature world-view harnessed via extensive globe-trotting. Within a period of 2 years, they have toured extensively, released a self- titled EP and are currently writing and recording material for their debut album. One half the duo, Kanchana, a former-Civil Engineer, also conducts Afro-Sri Lankan drumming workshops for aspiring percussionist in his motherland. It’s something we hold close to our chest: True dedication to the craft. 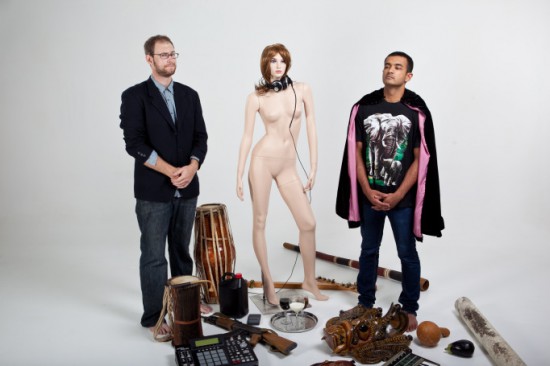