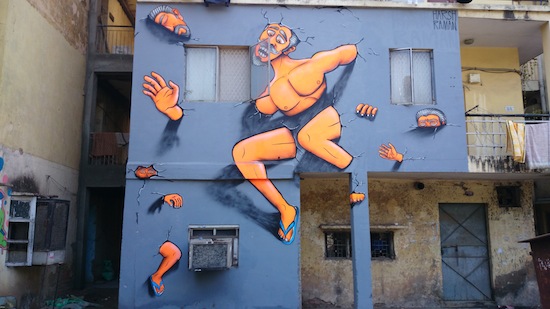 It’s never easy to be the first one to do something radically different. Ideas need time to take root and they need to be handled well or they will never amount to anything. So when you are trying to build something new, you are not only the guardian of the idea but you are also the influence that people will look back upon.

In the city of Mumbai, where I was born and raised, we see graffiti differently from Delhi. The people who truly look to practice the art of painting on walls usually have their roots in urban graffiti. The kids that b-boy know the kids that rap and they all know the kids that paint. Graffiti writers look to tag the walls of Mumbai with their handles and while it’s similar to the graffiti in the west, differences in approach remain. Graffiti is writing a tag on a wall but street art is about making art in a public space. Delhi is a little bit different from Mumbai because Delhi is much more about street art. 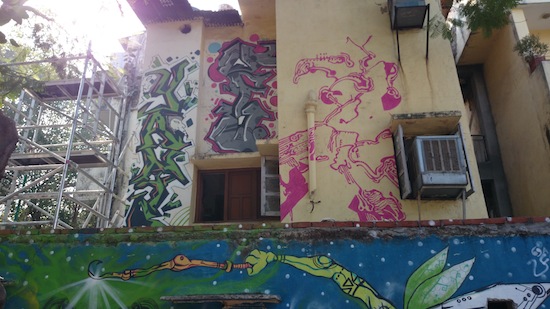 I met the crew of St.ART Delhi, the festival that was going to take Delhi street art up a notch. The people working here ranged from lawyers and filmmakers to students but they all had something to contribute to the ideals of this festival. Whether it was documenting it through video, promoting it on social media or getting the all important sponsorship contracts together, there was a lot going on. Running the show is HanifKureshi, the brains behind Hand Painted Type and various other artistic endeavors. He had sought out ArjunBahl to help put together this festival more than 18 months ago. Giulia Ambrogi, the festival curator who was working with these two all the way from her home in Rome, Italy, told me that getting sponsors, schedules and structures together was incredibly difficult for them to begin with but through perseverance and patience, the project began to take shape.

Backed by sponsors such as the various cultural institutes of Germany, Italy, Poland and even Delhi Police, St.ART Delhi has spent that last few weeks creating some beautiful works across many parts of the city. Through the duration of my stay, I found ShahpurJat to be the focus of many murals. It was clear to me that the residents here are a strong community -the rest of us were just outsiders making waves in their home. 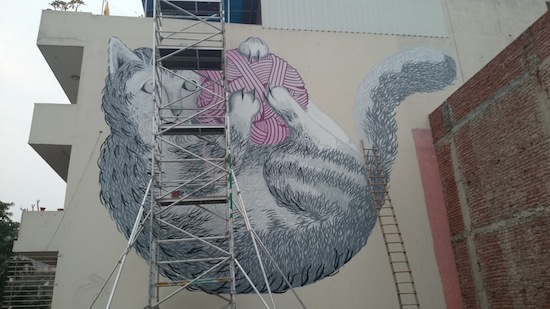 I could not understand why there were so many boutiques, cafes, bakeries and high-end fashion shops in this village. It simply did not fit because of the grotesque difference between the people that lived there and the people that worked there. I felt uncomfortable watching the upwardly mobile denizens of Delhi mingling with the residents of ShahpurJat but here was the reality. Perhaps it’s because both parties are unable to relate to each other in a meaningful way that it feels odd to watch this happen. I have nothing against high-end fashion or bakeries cause I like doughnuts as much as the next person and I paused to think that maybe this little art project of ours was no less elitist than the cupcake shop.

Here’s where the street art proved me wrong though. While the children of ShahpurJat were curious and energetic, I didn’t see them running around outside the fashion boutiques or even the bakeries. Instead, these children spent all their time shuttling between the various sites where the street artists were painting their murals. There were so many of them and they were excited to learn what these strangers were doing painting on their walls. The children wanted to introduce themselves, ask as many questions as possible and just generally be a part of what was going on. The street art and artists engaged these children in a way that the businesses in the area never did. It was inclusive not exclusive. 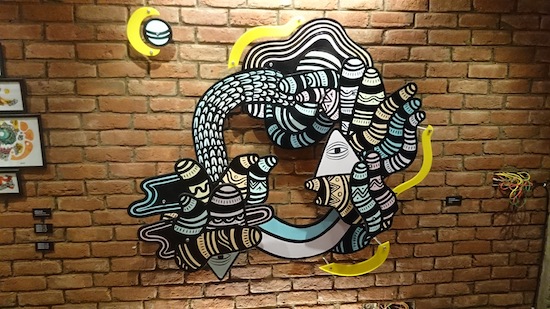 The mural at ShahpurJat simply did not compare to the biggest mural of the festival that would take center stage and send the national and some international media organizations into a tizzy. This mural is the work of Hendrik “ECB” Beikirch, a German artist who is well known for his humungous portrait murals. His monochromatic portraits tower over cities such as Busan, Hamburg, London and many others. Hanif very calmly told me that getting permission to paint on the Delhi Police Headquarters was not as hard as it seemed to be: “I did a workshop in Tihar Jail not too long ago which was well-received by the Director General there. She told me that Delhi Police HQ might be a good place to paint and she gave me the names of a few people to get in touch with.” Hanif explained. After pursuing the matter for a little while, Hanif and Arjun managed to come to a consensus with the Police and agreed upon a portrait of Mahatma Gandhi, which Hendrik duly painted. So when Martyr’s Day came and went, we had a new portrait of Gandhi to honour.

St.ART Delhi will have many more events this month but for me, the highlight has to be the street art exhibition held in HauzKhas. ‘This Is Not Street Art’ is a culmination of all the work that the artists have put together for the festival. It ranges from simple art prints and t-shirts to large installations and even the odd sculpture or two. The opening of the event had all the glamour of a big ticket art show but that’s exactly what the organizers were looking to do. This was a serious art exhibition that heralded the arrival of a burgeoning art form in India. The exhibition space was filled with serious art collectors and art scenesters who seemed to appreciate what they were seeing. The exhibition will run through till the end of February and it’s free for the general public to attend. As I made my way around the exhibition, I caught a snippet of a conversation between some artists. Apparently, one of them was milling about in ShahpurJat when he came across a small boy with a marker pen scribbling “Daku” onto the walls. I smiled to myself because I knew the significance of this moment. If imitation is the best form of flattery then the seeds have been planted. 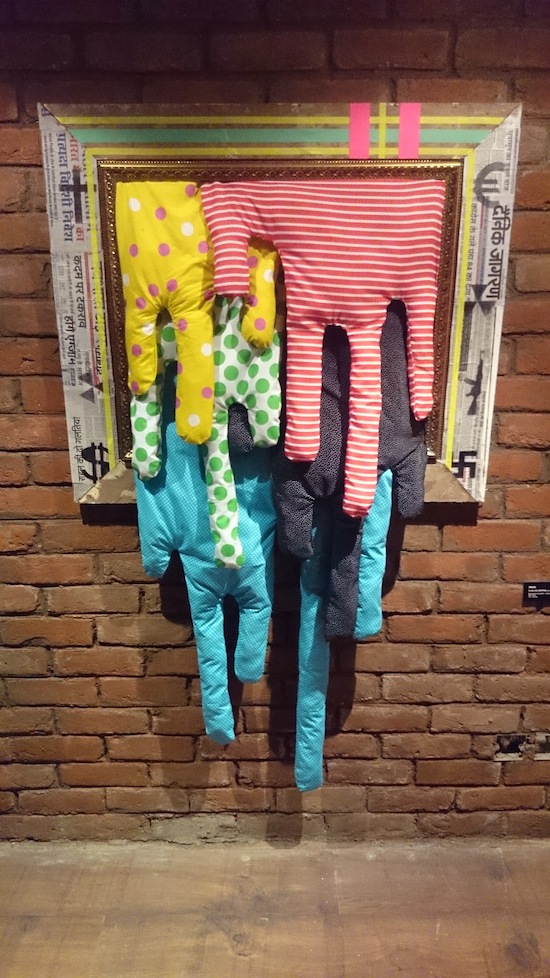