In the Skype performance Embedded Phase Delay about the ›missing half second‹ – a theory of the German physician Hermann von Helmholtz 1851 – the medial intervention of two musicians and a dancer explore rhythmic resonances between three locations.

The tabla player Amjad Khan sends sound waves from Bangalore, arriving with a delay of approximately 0.7 sec in Freiburg/ Germany. There they are manipulated and reflected back to India in discrete sound particles by the electronic musician Ephraim Wegner using granular synthesis algorithms.

In parallel, the dancer Graham Smith improvises to the sound mix in a shopping mall in Germany. His movements trigger video images that are transferred to Bangalore and projected there. In addition to the missing half-second in the bodies of the performers the delay of the data transmission is generating a further technical temp perdu (lost time) in the affect area.

It will be explored, whether in this tissue of cells and activities the oscillating transmission gaps are just lost or if these moments can be filled with interactive experiences and emotions that become visible through organic vibrations and interferences. How is the body awareness, the sense of space and time of both artists and the audience influenced by this kind of connection?

As a working hypothesis the project assumes that communication via digital channels is dismantling the presence in dots and lines, so the subjective experience of time tends to lose its duration. The performance is therefore not designed to function in synchronicity and harmony. It shall unfold itself in the meaning of Bergson as an experience of intrapsychic durée in constant motion.

According to Bergson`s philosophy durée is considered as an “unbounded flux” of time that “gnaws into the future and which swells as it advances.” Duration is not a succession of moments, but it is the combination of time and motion that encompasses all existence. In the ›missing half second‹ the past as well as the upcoming future are present as coexisting spheres (Deleuze). 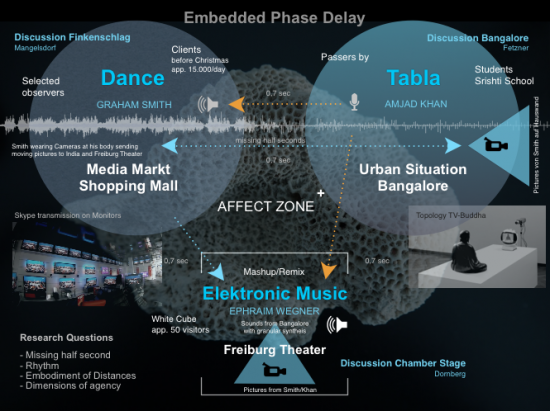 In the 30-minute performance, the actants try to fill the hyper local space with a intercorporeal resonance as a biomediated body (Clough) by creating an affect zone through their actions. With the surrounding actants in Bangalore and in Freiburg local functional circuits with specific temporal structures are set in motion that affect the action. The physical environment experiences a dematerialization and deterritorialization by this trans-local connection, while the bodies of the improvisers act as kinesthetic amoeba in a placeless field of action.

Both musicians and the dancer are embedded in their own place in their own environmental relationships. The goal-oriented placement of these situational contexts of action is supposed to create a specific mediumship. The medial Interplay shall redefine a virtual place and time as a stream without beginning or end in the sense of Deleuze/Guattari:

»Between things does not designate a localizable relation going form one thing to the other and back again, but a transversal movement that sweeps one and the other away, a stream without beginning or end.« Deleuze/Guattari (1992)