As years passed, shadowing Sawhney’s songs are ocular stories – whether through PCRC or his electronic moniker Lifafa. His album ‘Jaago’ is one of the best releases to come out of the country this year. The album cover could also find a place in the indie hall of fame (if such a thing existed). Designed by pottery artist and painter Vivitsa Kohli, the stereophonic art made in Sawhney’s image paints quite a picture. The vivid use of colour and late 50s poster image enhancement is very representative of the musician’s cinematic lens. 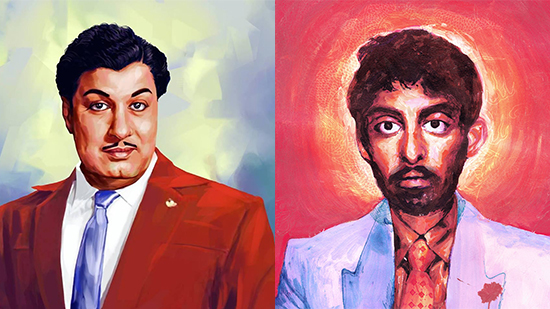 The idea behind the cover was to imitate the bright, larger than life painted images of late Tamil actor and politician M.G.R. When Sawhney saw a picture of M.G.R, he knew he wanted ‘Jaago’ to be similar. He says, “The whole burning vibe behind the cover image, the coat and tie, it is all in M.G. R’s image. It was absurd and iconoclastic at the same time. I knew this is exactly what I wanted for ‘Jaago’.”

For Lifafa’s debut album ‘Lifafa I’, the album art was a picture taken in an ex-partner’s house. Most of Sawhney’s visual work is made up of chance encounters. He does reiterate that luck has played a very important role in finding visual footing as Lifafa and for PCRC.

While on a beach in Goa, Sawhney noticed two dogs finding each other every sunrise and sunset, and playing to their hearts fill. Then and there, he filmed this rendezvous for PCRC’s ‘Copulations’ music video. It captured a moment suspended in time. It is a visual vacation. The song fit right into the image – the world is full of crap, so here are two dogs.

The whole video was shot on an iPhone 5s. Another iPhone miracle was the Great Wall of China that featured in PCRC’s video for ‘I’m Home’. The ominous opening to the song shows Sawhney on the Wall, in a twisting, drunken glide, much like the symmetry of the Wall itself. The idea to shoot the video came to Sawhney when touring across China. Rana Ghose, founder of REProduce Artists, shot most of the video along with Sawhney.

The idea to shoot there emerged after learning the enormity of the landscape they were facing. Sawhney explained, “We landed up at a less popular area of the Wall. It’s insane. Like the asymmetrical scenes of cities you see in the movie ‘Inception’. All the images just stop making sense. The idea of a literal road in the clouds had a lot of appeal to the idea of Death visiting someone.”

The portion of the video with a funeral pyre was shot in Delhi’s Hauz Khas Village. I should not be surprised by Lifafa’s accidental ‘findings’ by now, but that it was shot in a cremation ground for cows is a comical twist of fate.

But there’s only so much room for chance and fate. It takes a trained eye to spot their potential. Lifafa went to film school in San Francisco in 2007, which might explain a portion of his cinematic world view. “I care more about the depth the story of an image has,” says Sawhney. “Sometimes you gotta’ convince yourself that it’s a good idea. There’s more value to capturing the correct place with the correct meaning.”

The cover image of PCRC’s upcoming album (slated for release in June this year) ‘Bismillah’ is a fine example of this sentiment. The cover photo shows an image of an elderly man dancing – eyes closed – with a bottle of champagne. It’s the kind of photo we no longer see in wedding albums – the colours, the overexposure, the memory. Turns out the man adorning the album cover is Sawhney’s father-in-law. 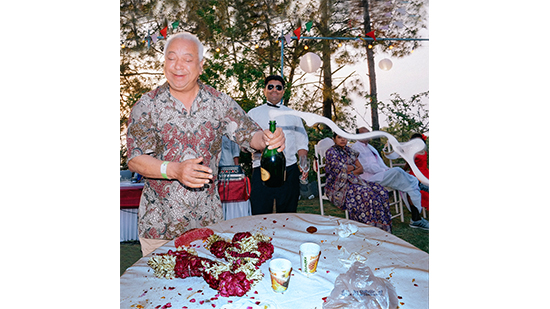 Although the inspiration for the album cover was another stroke of luck, the video for PCRC’s ‘Floated By’ is a well-planned endeavour shot at Sawhney’s wedding with filmmaker and journalist Surabhi Tandon. It offers an ambrosial insight into sights, sounds, colours, and moments that touched him. The wedding venue, a 3-storey home in the Kasauli region of Himachal Pradesh, was an optical blessing.

Apart from ‘Floated By’, ‘Bismillah’ will feature seven other songs. The band is set to shoot music videos for at least two songs from the album. While a sizeable portion of the band’s visual ideas come from Sawhney, band members Kartik Pillai, Dhruv Bhola, Rohit Gupta and Karan Singh, weigh in on the design. ‘Floated By’, shot by Sachin Pillai, Nitish Kanjilal, and Sawhney, was a cumulative effort on every front. Not just the band members, but also Sawhney and Tandon’s friends and family has a visceral contribution.

There’s also an obvious question to be asked about Lifafa and PCRC’s stage presence and design. The band knocked it out of the park at Magnetic Fields Festival 2018. Their stage design was an ode to a celebration in red. It took on a gypsy-esque flavour with red curtains and yellow lights. 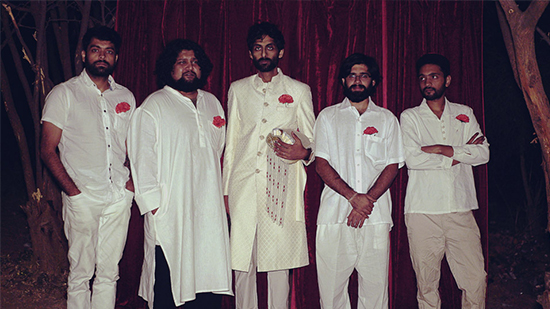 This visuality also extends to fashion. It was Sawhney’s idea for the whole band to be dressed in white kurtas, with red roses pinned for their gig in Bangalore a few months back.

Sawhney has his eye on the little things. On the sounds, the colours, and the roses in pockets; on the detail in the walk on the Great Wall of China. It’s even on the names of albums – ‘Sinema’, ‘Portrait of a Time’. More importantly, it is the little stories. As Lifafa puts it, “The story behind the art is as important as the art itself. Like it was for ‘Floated By’, sometimes the connection with the created vision is serendipitous.”