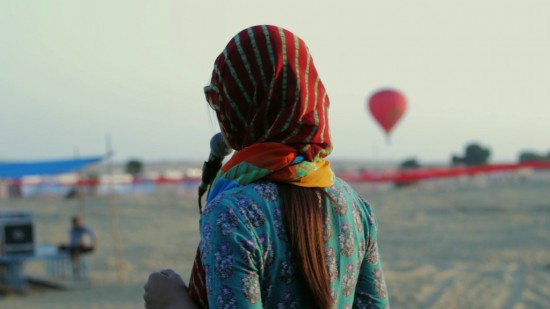 I’ve got to give it to the organizers: it can’t be easy. Putting together a festival that hops genres as wildly as Ragasthan does while still keeping guests engaged involves a great deal of juggling. Perhaps aptly, Ragasthan chose to take the three-ring circus approach – rock, world, and electronic.

The Border Movement team spent little time at the rock stage. It’s not that we hate rock, it’s just that it’s not really what we came for. And also, we kind of hate a lot of the rock that was being played there.

You are also not in the 1990s. And you know what the crazy part is? The ‘90s weren’t even the last decade. And the 80s have been the hot retro shit for about five years now. Do you realize what that means? That means that when you’re in the your early-to-mid 30s and playing the same music you played in college, there will be school kids in retro bands playing the same music as you, because it will have come full circle. 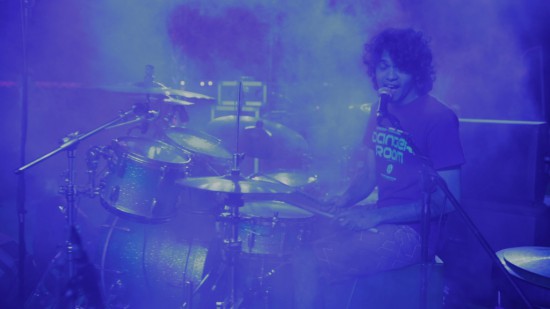 College rock aside, we caught two bands who turned in stellar performances at the rock stage. Sky Rabbit brought a fine set of brooding electro-indie that recalled The Shins, were The Shins to go off of their medication. We’re big fans of SnowShoe, and enjoyed hearing Rahul Nadkarni’s more traditional rock side.

Most stunningly, and perhaps the highlight of the entire festival, was Peter Cat Recording Co. Peter Cat embraces an aesthetic of the decayed and the whisky soaked. Vocals spit through a bullhorn while keyboards are wired through fuzzy amps to dull their edge, presenting the crowd with a sound that seems to belong to a dusty attic full of boxed memories, only just now pierced by a jarring shaft of unaccustomed light. Everything about the music is calculated take the edge off, as if Peter Cat exists in order to produce the aural equivalent of a stiff martini or a well twisted vanilla Dutch.

They call themselves “gypsy jazz”, but sound entirely unlike any gypsy jazz act we’ve heard before. There is cabaret in there, and jazz, ballroom, psychedalia, and most of all, just good old rock n’ roll. But whatever genres Peter Cat might draw from, the overwhelming impression is one of music that is created to be cinematic. Lead singer Suryakant Sawhney did nothing to dispel that impression, staggering across the stage, wearing a keffiyeh on his head, and madly triggering desi samples and film dialog as he sang to the great expanse of dunes, at times seeming to channel Leonard Cohen and his world weary whispers.

The Kanoi Dunes may have been an ideal venue to hear Peter Cat, but we were left wanting more. The band tells us that epic three-hour sets should be in offing some time soon. We’re eager to go along for the ride. 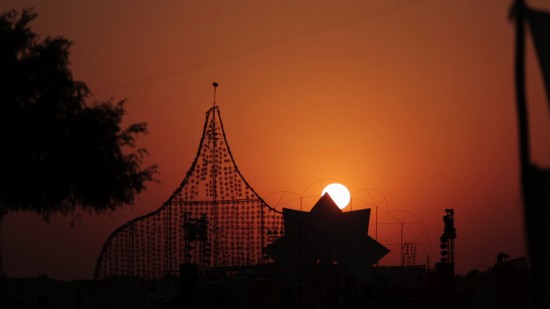 Some of us at Border Movement take exception to “world” as a genre label. It’s simply an easy descriptor for those who don’t care enough to figure out what they’re actually listening to. In the case of this stage, however, it was apt. Latin, Asian, and African artists shared the most dynamic bill at Ragasthan.

Tritha Electric, perhaps the most global band on the world stage, with representatives from three continents, delivered a cavalcade of searing electro-acoustic beats accompanied by Tritha’s characteristic vocal madness, and onstage beauty school antics by Delhi’s own musical impresario, Mr. Stefan Kaye. We only caught the final moments of the set, but Tritha’s explosive ululations, drawing on classical, folk, and filmi traditions were inescapable across the festival grounds. That was just fine; we didn’t want to escape.

The Reggae Rajah’s delivered a typically upbeat set, drawing on reggae rhythms both new and old. The dunes seemed a natural setting for their party starting rhymes, and we particularly enjoyed their delivery over Collie Budz’ Come Around, another track rooted in their particular blend of cross cultural reggae experimentation.

Latin America was represented at Ragasthan by Negra Pradera. Our enjoyment of their fine showmanship was only slightly diminished by a disastrous job at the soundboard. An almost non-existent kick drum was swallowed whole by the overwhelming crash cymbals that dominated the mix. Despite the setbacks, frontwoman Belén Cantos, gave the crowd no choice but to dance, exhorting them with both her words and her groove. She promised two special surprises for the crowd; the first was an astonishingly good vocal collaboration with members of Chalo Africa. The second we missed as we headed over to the main stage eager to hear Peter Cat. 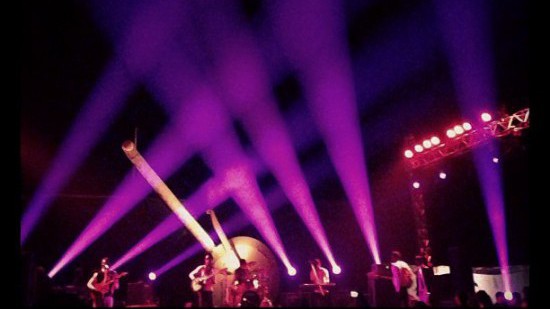 The electronic stage presented a mixed bag. As mentioned in part one of our coverage, the programming was such our favorite artists were spread across three nights.

Early on the festival’s first night, Akshai Sarin played a preview set for his soon to be released album, featuring vocalist Priyanka Blah. Though the set had more of pop structure than we had expected from Akshai’s past efforts, the workmanship and production was clean and deep. Priyanka proved to be a firestarter for the early festival crowd, inciting new comers to let loose in the desert.

Next, Bombay regulars Bay Beat Collective came correct with an exploration of bass that crossed from drum and bass to dubstep to breaks to grime and back again. We heard most of the set while wandering across jet-black dunes; the perfect accompaniment for mountains of bass.

The following set by Nucleya provided one of the highlights of the electronic stage. Nucleya never shies from genre experimentation, whether across a set or even within one track. And the best bits of the set were his own tracks, which saw no contradiction between folk vocal samples, street drums, and syncopated kicks. Jamrock, a track we had previously heard only on laptop speakers, absolutely exploded over the powerful desert sound system. Perhaps if we’ll lucky we’ll get a Reggae Rajah’s collabo one of these days. 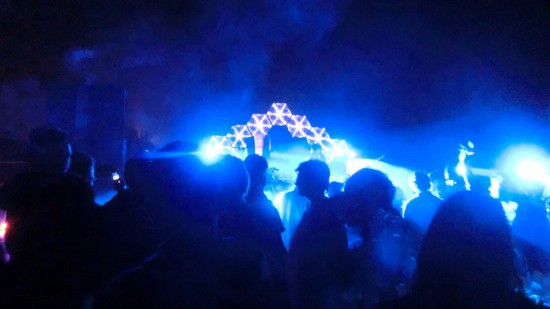 We hear great things about Dualist Inquiry’s sunrise set, but we were firmly ensconced in our beds by that time.

The electronic stage’s second night saw a fine set from Kohra, bringing complex but accessible organic techno to the floor. The highlight of the night was Shiva Sound System. They were at their bassy best when they stuck to clean, multilayered future drum and bass, but struggled a bit when they indulged their more American style bro-stepish tendencies.

The third night of the festival started with he most sonically interesting lineup of the festival. DJ Uri got the night started (we must admit that we were still in transit for most of his set) and was followed by Wild City DJ and then Mother Perera, both of whom absolutely destroyed the disco with the weirdest and wildest deep and wide sets of post-everything; dubstep, garage, drum and bass, house, and techno all seeped into their sound, but were channeled through a filter of sonic experimentation. Their sounds embraced empty space, leaving room for stuttering drums and fractured vocal samples. (Full disclosure: both DJs are involved with Border Movement).

The night was rounded out by representatives of Jalebee Cartel and Midival Punditz playing thoroughly competent if somewhat dated techno and psy. Miraculously, Punditz’ Gaurav Raina was rounded up from the party for a final sunrise set (we’ve been told it was transcendent), after the stage’s programmers left for their early morning flight without a closer yet in place.

At the end of the three days, we were left with the memories of a handful of really great performances, burning coals of anti-Vedder rage deep in our souls, and the recognition that even when nothing on the stage was really doing it for us, we were still watching that nothing from glorious mountains of fine grained sand, under the stars, vast distances from any sea. 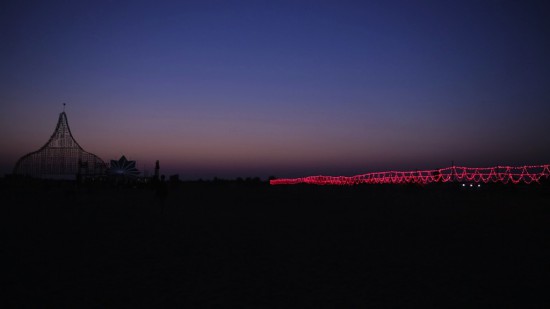 2 responses to “Ragasthan, Part Two – What Really Matters: The Music”