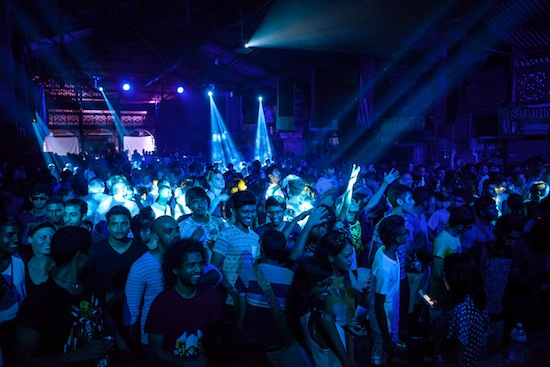 Rays of twilight seeped in through semi-sealed archways that lined the sides of this dimly lit market place. A musty market fragrance took my attention away from the clusters of busy folk, bustling around with walkie-talkies, adjusting lights, fans and benches along the base of what looked like a permanent fixture of this giant hall- a massive platform, flanked by screens, set up for what was to be 2013’s Pettah Interchange.

Lines of shops had pulled down their shutters for the day. The old town hall- the city’s oldest traditional market spot in the centre of old Colombo, was going to play host to a carefully crafted event– one which showcased dance music from different backgrounds, in a setting that maintained an impeccable balance between organically what it was(a marketplace), and provisionally what it was doubling up as– a dancefloor!

Detailed attention to the aesthetic, (traditional saris suspended from beams on the ceiling and recycled jute grain sacks lining the walls as décor), blended in with international standard club apparatus (visual rigs, lights and a soundsystem equipped for the 1000person capacity space). The venue was setup to ensure a unique experience– we definitely hadn’t partied all night in a marketplace before.

Just outside the market hall, there was an intimate, makeshift sit out, where a couple of acts warmed up and welcomed in the early birds with electronic/acoustic melodic sets for a couple of hours.

The gates opened at 10p.m. to Sunara’s set– drawing the flocks straight past the bar and up near the stage. A groovy, jazz infused hour of mid to uptempo glitch later, SL’s Kinesthetics0800 and MusicMatters Collective took over- a live band featuring sublime female vocals, locally flavoured rap sections, live beats and samples.

I (Sandunes) was really pleased at the openness of the crowd and the response to my live set, which I played before Gaurav set the mood for the rest of the night with techno influenced uptempo gratification. Skinner Box- this two man + minimoog team worked a rig that spread across 20meters of the stage- an ineffable live set that seemed to kick off with the venue packed to capacity.

Asvajit– homegrown favourite, was warmly greeted by the now-insatiable crowd as he took the pace of the night up and into the wee hours of the morning, followed by a deep closing set by Geve that sealed the deal on the night that was.

Having gotten used to a Mumbai style gig habit of being home by 2a.m., what we were left with was dawn, and the feeling of- ‘Did that really just happen?’- Indeed, we partied all night at the marketplace.