Let Grime Riot Disco be your personal fuck you night, whatever your reasons to raise that personal fuck you are. I’m cursing Bombay’s highly fabricated nightlife. And not for its lowest-common-denominator EDM, or that my tastes are now rooted in some characteristic view of what’s alternative. It’s because its venues – take your pick from the Phoenix Mills crowner Tryst to the back alleys in Khar – have gifted me with a deplorable youth. It’s that nauseating existence when you’re forced to keep up with that ex-girlfriend you can’t afford, craven, with chlorine-scented tiles for a backbone and a phone-clock that moves slower every time you look at it.

Kunal Lodhia seems to share my resentment. He launched the Grime Riot Disco nights to make nightlife fun and affordable again, and he’s hosting them at the worst of these venues – most of which have run their course or suffered countless name changes to even show up on Google Maps.

“You know that Bollywood Mischief spot on Hill Road, now taken over by Rude Lounge,” Kunal marks with triumph. “Everybody in Bandra drove by that place, like every single day, and nobody went up stairs to see what it’s about. But we went inside, and it was just like an empty ballroom covered in old records, really weird lamps, and the DJ booth was like a vegetable cart. I knew right then that it was the perfect space for GRD to grow – and we took off from there.”

I’ll believe that music’s most iconic movements were an offset. When the Bronx wasn’t orderly enough to celebrate high-society disco, it celebrated hip-hop. The esteemed CBGB (R.I.P.) opened its doors to the nameless, only to baptize a punk rock revolution. Likewise, Grime Riot Disco swears underground justice with a ‘secret’ party every month, shape-shifting its courtroom and codes with each installment and remaining highly untraceable in the spaces between.

“When a Grime Riot Disco party is happening, you’ll just know,” a friend once told me. So I snuck in when it did, and the assault was local heavy – the likes of resident DJ Ruskin, Mode 7, Su Real, Flash Hardcor, Ez Riser, Moniker and Reji playing sizeable bangers to absolutely gargantuan turn-ups, crawling up the stairs and pouring over the bar counter. At midnight, most participants were still queuing up for a chance to get inside.

So, as GRD claims expansion this year with covert installments in Delhi and Pune, I have a question: is this still about reinventing big city nightlife or just a discriminatory playground for Kunal and his clique.

Grime Riot Disco. What does it mean to you when you put those words together now?
First off, Grime Riot Disco doesn’t actually mean anything to do with grime music. That’s what a lot of people think. Grime means the place – places that were off the chart, places that were kind of run down, not really maintained. So the space itself is grimy. Riot comes just from what you do inside. Go mad, pack it full of people who are full of energy and have their fists in the air. Disco goes back to the place, and not necessarily the music again. In India, a nightclub would be called a disco or a ‘disco night’. So Grime Riot Disco is just a combination of an adjective of that space, the space itself and what you would do inside that space.

And you’re taking the night back. What exactly are you taking the night back from?
The parties started when a whole bunch of us were looking for a place to go out. We found ourselves at a really bad nightclub, sandwiched between a wall and commercial house music, with an overpriced drink in our hands. That was the first time we heard ourselves say ‘fuck this, we need to take back the night.’ We need to create a space where people like us, open–minded, experimental, want to go out have a good time and not have to dent their wallets. The idea was to just start internal with our own friends and create a party, and the only places that were willing to experiment were places that were off the charts, like H20 in Khar and Bollywood Mischief in Bandra.

Has the GRD crew remained internal since?
It started off with Monica (Dogra, Shaa’ir + Func), Ruskin and myself. Ruskin’s been an integral part of the scene from the beginning. He’s always been our resident; he sort of got the vibe right the first few times we had it. People look forward to him warming up the room right before the guest DJ goes on. Then of course it’s our core friends who support us and show people how comfortable they are at the party. That translates into other people feeling comfortable. 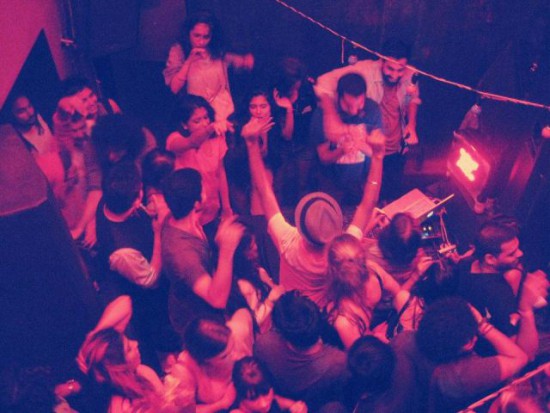 They’re calling this the anti-party though.
The Anti Party. I think Monica came up with that name because it was a party in the face of all the other parties in Bombay. It was like we’re just going to do it differently, we’re going to do it our way, and it’s going to work. So it was like a stance against big nightclubs where people just got sucked in and had to go there cause there was nowhere else to go.

Would you say Grime Riot Disco promotes any particular genre or sound?
It’s interesting – it started off as like funky, soulful music, but then I found that it doesn’t really matter what you play as long as it’s got groove and it’s dance music. So we’ve had artists like Matthew play house and techno, then we’ve had Phono (UK) play garage and bass music. Sohail (EZ Riser) plays glitch hop sets, Reji plays hip-hop and Karsh Kale once played a full on New York City funk and hip-hop set. I find that the crowd is really responsive to anything that is dance music oriented, like that tempo, that 4/4. It’s not necessarily bass heavy music or angry music; it’s light to the ears and has that slightly female energy to it. I feel like that is what GRD is about: that sound that’s soulful.

In a Wild City review you had said that ‘Grime Riot Disco is not looking to pull in a certain type of person’, but your parties are still exclusive.
Right, so we did the list to create a space that was safe for women and safe for the people who came there, to feel like everybody was there for the same reason. With a list you don’t just get random people who stand around and look at the scene and judge it. It’s people who want to be a part of that scene, and they do that by discovering it. How? Through the posters we have online, the news, through online magazines, through articles, through our Facebook, through our blog. Once you figure it out, you’re in. You join the group and you’re a member automatically, and you’re on the list. So it’s not inaccessible, it’s just accessible to those with a little bit of inquisition.

After a successful run in Bombay, would you consider hosting the nights more frequently in Delhi?
We’ve just about started to showcase the night in Delhi. First we did TLR last year where we didn’t have an underground space or a space that was run down, but we wanted to sort of say like GRD presents or this is what we represent in Bombay and we’re bringing it here. The response was amazing and we just had another secret party last weekend. We didn’t announce the venue until the day of the event and 300 people still showed up, with like one paper sign stuck to the wall.

Were there any disparities encountered in addressing Delhi’s nightlife?
It’s been fun. We tagged a GRD traffic light for one of the parties, which was a traffic light that was “acquired” with a ‘Grime Riot Disco’ sign on it, and the bass was so loud that the speaker stack fell over and smashed the light. I just thought that was the best way to go for the nights in Delhi. I would still say that Delhi’s a tougher market to crack though. Without the support of really close friends, we may not have had a successful party. There are a select few people who are like scene pushers there – for instance Tapan from Midival Punditz, Gaurav from Blot, or like Munbir (Moniker/Wild City) and Smita from Grey Garden. The tipping point happens when those people push it to that extent, and then everybody kind of just falls through. 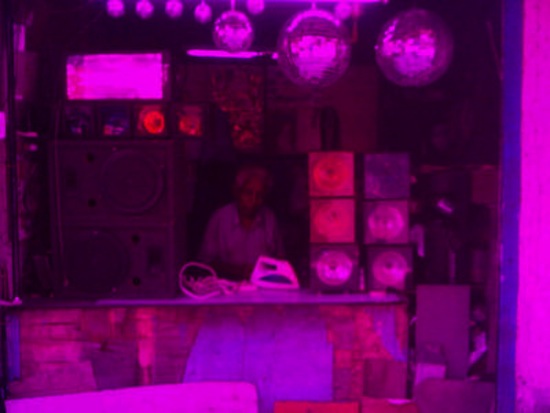 And you’re saying Bombay doesn’t subscribe to that ideology?
Lesser so. In Bombay, everybody kind of has their own mindset. They check things out for themselves, or like they’re always on Facebook to see what’s happening out there. Fine, you do need a few people to help share the event, but I can safely say now that I don’t need help selling GRD in Bombay. People are just automatically in tune with it.

Since GRD is becoming such a strong medium for self-expression and well, discovery, are they any plans to push it forward as a brand?
I’m going to be starting podcasts next year for those artists who are into releasing their sets online, or maybe release an exclusive mix that that DJ wants to provide as a lead up to their performance at GRD. I’m also looking at developing Riot Gear or merchandise that is specially geared to the GRD crew – things like party gas masks, and knuckledusters. I can’t share too many details about that right now but I’ve got a few designers involved.

And what should we expect from the turn of the season?
For the next season, after the monsoon, I’d like to have a regular in Bombay, Delhi as well as Pune. We just did a great party in Pune. Again, just to say we’re Grime Riot Disco from Bombay and if you like the sound and the energy of this party, then the next one will be at another space, and you can look out for it!