Music In Colour: The Story Of Magnetic Fields’ Visual Journey 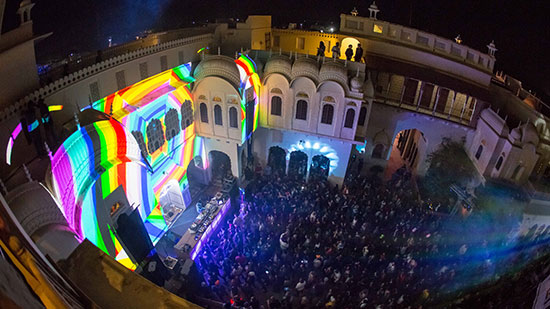 There are moments when Magnetic Fields feels less like a festival and more like a story — a desert mystery shyly unveiling herself to an intrepid explorer.

But perhaps the best argument for this idea — festival as story — is expressed late at night, in the Alsisar Mahal courtyard, where the Red Bull Music Academy North Stage transforms the palace into India’s most unique open-air nightclub. Every night, this is where the energy peaks, with guests dancing beneath the stars as sound pulses through the ancient flagstones.

And every night, this space looks and feels different. It evolves. 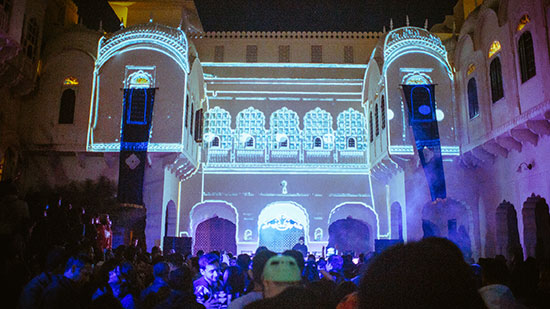 The DJs perform from an understated booth — there are no LEDs or pyrotechnics to be found. But behind them, on the palace’s gorgeous ochre walls, the story unfolds.

On Friday night, Alsisar Mahal is largely dark, illuminated only by flashes of white mapped specifically to the palace’s ridges, arches, and fixtures. “We try to work with what we have, to keep it minimal. Day 1 is black and white,” says Amendeep Pablay, who coordinates the visual team for the festival.

On Saturday, the story finds its colour — greens and whites and smatterings of purple. “This has been a conscious effort since year 2,” says Pablay. “We don’t want people to get bored. We don’t want to overwhelm them right away. We progressively plan how hard we go.” 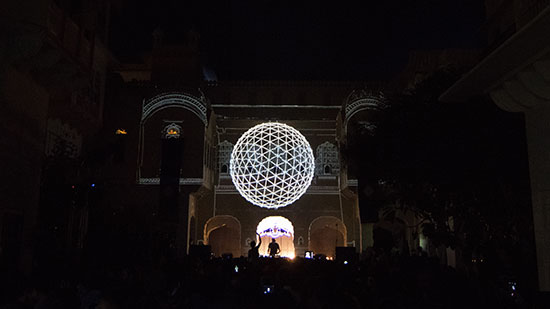 For the viewer — or listener, or dancer – this sense of anticipation climaxes on Sunday night. It is a crucial moment for the festival — legs are tired, noses are runny. Seasoned Fielders are already beginning to dread Monday and the week to come, so it’s imperative that the festival delivers a final blast of exhilaration. This year, it did. “Day 3 was the surprise element,” says Pablay.

Surprise would be an understatement. As Floating Points’ vinyl collection warmed Alsisar Mahal with soul and disco, the palace’s entire façade burst into movement. From there, the Brit pivoted into a showcase of his signature electronica, punctuated by glossy techno — and the visuals followed suit, swirling kaleidoscopes of colour, a whirling vortex of vibrant shapes and psychedelic patterns. All traced upon the palace’s architecture, all synced with the music.

It’s as if the palace comes alive on Sunday — the protagonist of this story, stepping forward into the spotlight after waiting politely in the shadows for two days. 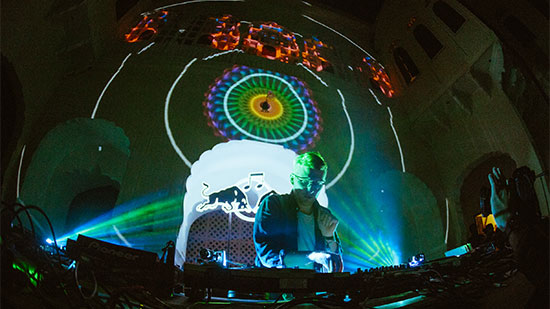 “Together, light and video elevate the sonic experience,” says Pablay. “The whole point is to create a cohesive unit, so that it feels like a wholesome journey. That’s what I want everyone to take back — the feeling that it’s all come together, that they’ve had a multi-sensory experience. We (the visual team) try to listen to the music of all the artists before the festival, so that we can match their sound with our content.”

“The lighting design and visual content all have to be in sync,” says co-founder Kunal Lodhia, who designed the festival’s graphic identity and this year’s RBMA North stage. “Naveen from Ground Kontrolle, who leads light design, was in a booth with Aman and the rest of the visuals team — Lalindra Amaraseka (Cyber Illusions), Nikunj Patel, and Nishant John (Zombie). They were together the whole time, syncing lights and mapping the visuals both to the beat and to each other… the audience should feel that when the artist is shifting the sound and energy on stage, the lighting and visual elements translate that sound visually while reflecting the current mood cohesively.”

But the Sunday night visual extravaganza at Magnetic Fields Festival 2016 didn’t happen overnight. It’s the culmination of a gradual process of improvement that began when the festival was inaugurated in 2013. 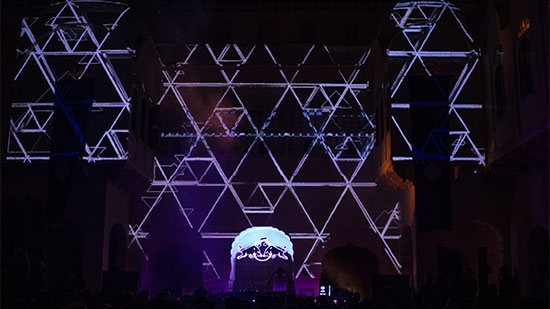 “Kunal and Munbir (Chawla – Magnetic Fields co-founder) got in touch with me in year 1, asking me to do visuals,” says Pablay. “We didn’t have a lot of equipment, but when I first arrived, I was blown away and inspired by the space. It gave the VJs and me a lot of ideas. It was so raw — the beauty was there, we just had to accentuate it.”

“In 2014, we got our first bit of funding from Border Movement,” he continues. “We did one installation with connect technology, that you could walk past and interact with. Meanwhile, Nishant, Lalindra, and Sourya Sen (Oblique), came back from the Border Movement Visual Lab with lots of new skills and ideas, which we were able to showcase at the festival.”

“2015 was the first year in which we had an LED on the South Stage. There were more areas, too. For the Resident Advisor dungeon party, we put in a camera right behind the DJ, then projected that footage onto the walls outside the dungeon and manipulated the video. We also had the Thump and Border Movement Forever South vs Consolidate secret party, where we projected onto the palace’s outer walls. It was low-tech but very effective – we had to physically move all the projectors from one area to the other, during the festival, climbing around to set up the gear.”

“Then of course this year, we had our biggest technical inventory ever. We had a 20,000 lumen projector for the first time, and we were able to do a lot more with it.”

“We’ve added more visual content into the stages over the years,” says Lodhia. “The content that we design with the visual team is in line with our aesthetic and theme for each festival. This year we did incorporate more colour into the festival – from the currency, to the wristbands, to the lighting. And thus our stages felt more vibrant and colourful – if you were there for Floating Points you would have noticed his cosmic disco tunnel with all colours of the rainbow.”