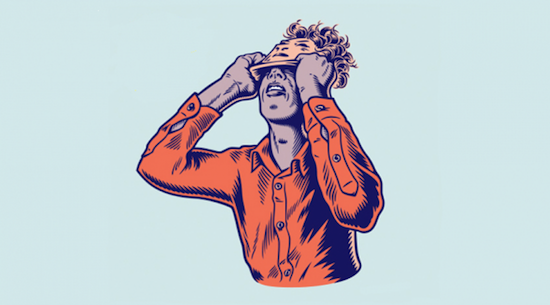 This was the world premiere of their new live show, following the release of their sophomore LP, ‘Moderat II’, and the band hadn’t played a UK show for almost 3 years.

An electronic music super-group originating in Berlin, Moderat started as a collaboration between Sascha Ring, also known as Apparat, and Gernot Bronsert and Sebastian Szary, also known as Modeselektor. Their first full-length album was released seven years after their first EP and the follow up a whole 4 years after that. The wait had been long, and quivers of this tension could be felt in all corners of the jam-packed main stage at Eastern Electrics Festival, just outside of London.

With all eyes focused on the stage, the Moderat trio emerged and took their places behind a visual heavy setup of three control station consoles in a semi circle. Behind them were three projection partitions, which throughout the show would display a minimal and abstract backdrop to their aural onslaught.

Without a doubt, Moderat has been responsible for elevating production and programming techniques in the world of techno, whilst consistently releasing work that is uniquely melodic and yet still ravey.

Whilst the crowd (particularly the girl standing right next to me) jumped, popped, waved, screamed and whistled I stood still throughout almost the entire performance, stunned into submission by the razor-sharp precision of Modeselektor’s programming and Apparat’s musicality as he held down synth melodies, guitar riffs and vocals.

Moderat II builds on what they achieved with their first LP and seems to be the fruits of a more harmonious relationship between the three. On stage, that was obvious.

Playing a healthy variation of old and new tracks, they powered through classics such as ‘A New Error’ and ‘Rusty Nails’, whilst surprisingly getting the biggest cheer for new single ‘Bad Kingdom.’

Even though the record has received the odd snippet of criticism for the trio’s new direction, the live show makes for a hugely immersive experience and I also have to point out that it’s most likely the finest live electronic performance you’ll find on any festival stage this year.

Below is an interview with Moderat just before their show at Eastern Electrics: