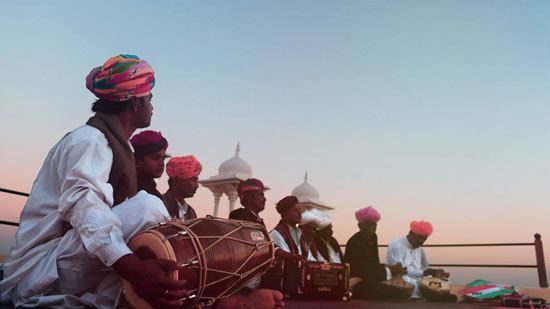 His Kamaycha was a family heirloom. In a trail of dust, the troubadour drew his bow across the strings. His feet swayed to the rhythms of the khartal. His patrons were different. So, were their Gods. But music transcends such differences.

It was in the deserts that I first crossed paths with them – the Merasi. Their sounds were punctuated with discordant clashing of notes – the kinds that broke silences. A complex manipulation of musical passages ensued that winter afternoon between the lilting sounds of the harmonium and the resonant drone of Kamaycha.

Amidst ochre ramparts rising against khejri trees, a lone Ravanhatta croons an old Allah Jilai Bai tune in Alsisar Mahal. The Merasis remember them well: the tunes of the past. It is here where a flock of seekers descend to the deserts of Jhunjhunu every year. 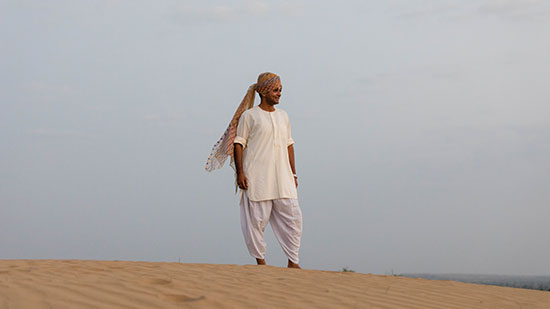 “Ghar ke andar ruh sangeet se aati hai”, said Abhimanyu Alsisar, the Raja of Khetri and one of the co-founders of Magnetic Fields. It was his homage to the ancient tradition of arts patronage that led to one of the most progressive contemporary music and arts festivals being hosted in his ancestral grounds.

A marriage of ancient and modern, Magnetic Fields showcases contemporary Indian alongside some of the world’s future-facing sounds. The theme this year celebrates ‘The Laws of Attraction’ leading viewers on a journey of discovery, of vibration and energy on a quantum level. “On a philosophical level, we’re keen to know what draws people to each other and back to the festival. A Magnetic Fields experience is a journey of the senses,” says Kunal Lodhia (WeThePPL), one of the creative directors and co-founders of the festival. “We take you through the weekend in a curated sensorial delight. You are immediately transported to another world where the old meets new. This time, our visual elements will include lots of sacred geometry. We will also explore ancient Indian patterns derived from vibrations and interpret it into our visuals which will then be mapped onto the Bira 91 South Stage and the Red Bull Music Academy North Stage. In fact, you’ll also see it spread across our art installations and general on-site décor.” 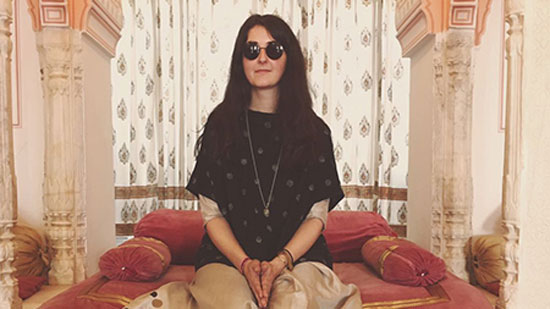 The festival is an evolution of each year – using an overarching theme to tie the narrative and visual identity which will manifest in the storytelling, installations and activities on-site including the artwork on the currency, and web-design. “Every year, the content evolves gradually. We’re so proud of this year’s line-up especially because we’re showcasing a lot more women,” said Sarah Elizabeth Chawla co-founder of Wild City and Magnetic Fields who further added that the festival will once again include a midnight jazz bar – a collaboration with The Piano Man Jazz Club as well as Magnetic Words along with the addition of Magnetic Sanctuary – a space full of workshops ranging from hang therapy to tea whispering.

Founded by Danish photographer, writer, and curator Sarah Høilund whose work primarily focuses on women, art, and global citizenship, Photographing the Female – an integrated workshop held before the festival this year will use visual storytelling to explore what it means to be female around the world today thereby creating spaces for important narratives to come alive and help the world understand how diverse, complex and extraordinary the female experience is. As a final exhibition, this collaborative effort will go on show at Magnetic Fields giving individuals a unique chance to gain a deeper understanding of the cultural identity of the festival. The collective will also work with the girls and women of Alsisar giving them an opportunity to engage with the arts, and partake in a unique experience – one that will enable them to explore a transformative medium of expression, and tell stories of their own. 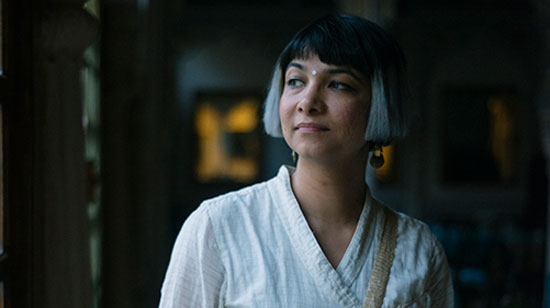 Each year of the festival is special in itself. For, it reveals something new. There are layers added to it – in aesthetics, programming, and production. “And, it all started with a conversation,” says Smita Singh Rathore (A G E N T), one of the co-founders of the festival, “Munbir and Sarah spoke about their experience going to festivals in the UK. They asked if I wanted to collaborate on creating one. I was fascinated with the idea from the beginning. It took us almost two years from that conversation to actually bring the festival to life in December, 2013. In the last four years, through the festival, with a family of collaborators/co-conspirators, artists and supporters we have all come a long way. And, we aren’t trying to be unconventional. We are simply creating a space for people to be themselves; for them to be able to attract joyful, artistic experiences in their lives, to experience themselves as magnets placed in the centre of their worlds.”

With respect to design and aesthetics, she feels this year the entire process is far more streamlined with influences ranging from Bedouins to the nomadic tribes of Rajasthan and Gujarat. Their motifs, food, dress, music and celebration of life, she believes, resonate with the values of the festival. “We also used a lot of natural materials. Some of them were locally procured with references from traditional sources,” she explained. 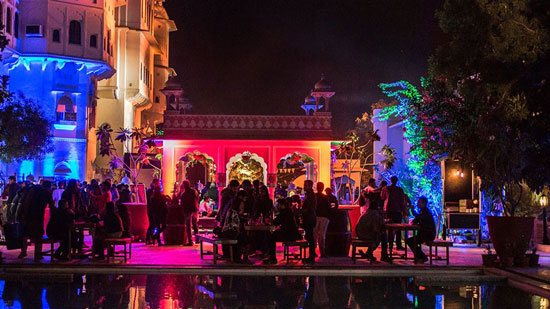 “We were never supposed to be a large festival. We aimed to be the perfect one, and this year it seems we are. One of the reasons why we really liked the idea from the beginning is because this is completely different from what we normally do. This is unchartered territory for us. And, that’s how it began six years ago. We are overwhelmed with the love shown by people for our festival and can only hope that their experience shall be wonderful too,” said Kanishka Singha, Director Creative and Content, THOT and one of the co-founders of Magnetic Fields, “The festival has become a means of expression for us which we continue to support with whatever funds we generate. As Jesus said “For what shall it profit a man, if he gains the whole world, and suffers the loss of his soul? With Magnetic Fields, we gained a soul…”

Magnetic Fields Festival will be held in Alsisar Mahal from December 15 to 17. For more information visit www.magneticfields.in. For a comprehensive guide to the music at Magnetic Fields head here.