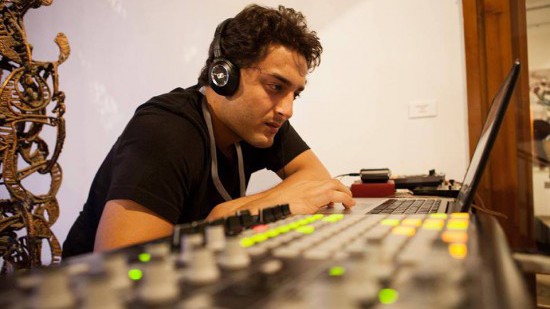 When trip hop emerged from Bristol, UK, in the mid to early 90s, it came from a certain antecedent that had root in the prevailing music scene. Combining straight up American hip-hop with a particularly European electronic aesthetic, the genre was sonically (and literally) a portmanteau. Acts like Massive Attack and Portishead could trace an indirect line back to new wave artists like New Order, Joy Division and Depeche Mode and those bands themselves could trace a lineage to Continental groups like Kraftwerk and Tangerine Dream. Picking up the trip hop mantle State side, DJ Shadow would be seen as an inheritor of the Afrika Baambata legacy, taking hip-hop further into electronica and inspiring numerous others in his wake.

For these acts either side of the Atlantic, a precedent existed, one that they built and expanded upon, unique surely but also evolutionary.

When electronic acts began to emerge from Pakistan in the latter half of the aughts, no such precedent existed; in fact they were the precedent. Dominated by pop stars and the occasional rock groups (Sufi rock to be precise), Pakistan didn’t readily appear as the kind of milieu from which electronic music would spring. However, it seems that Generation Y’s steady consumption of the very electronic artists mentioned above was proving to be inspiration enough.

While one could argue that indie/alternative duo Sajid and Zeeshan were the starting point of this ‘electric discovery’, purists would contend that Dalt Wisney, the “forefather” of the scene (as Islamabad-based TMPST calls him) helped kick off a movement that has gone on to spawn a veritable cottage industry. Scion of a musical family himself, Dalt Wisney aka Sheyar Hayatt (Rohail Hayatt, his father helmed the popular Coke Studio) made his freshman release back in 2007, through Mooshy Moo, a label he himself founded. A taste of things to come, the 5 -track EP was most definitely avant-garde and while it may have slipped quietly into the night, or at least played off a handful of stereos, it marked the first in what would eventually become a torrent of releases from the Pakistani electronic music scene. 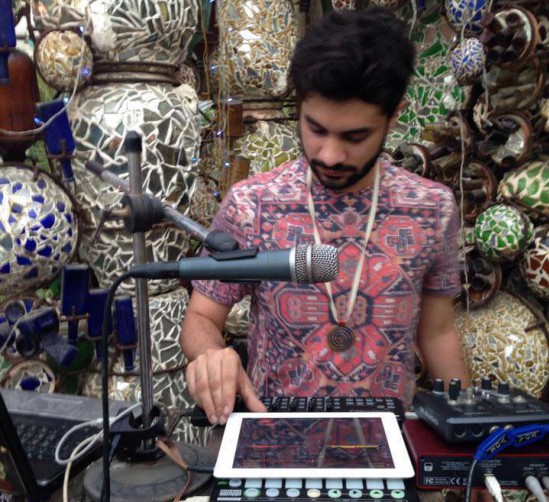 Nascent movements have a tendency to be all whizz-bang at the start but fail to sustain themselves, eventually petering out. Still very much in the single digits, Pakistani electronica is decidedly in its infancy but displaying a rare precociousness it has advanced rather than struggled, developed rather than stagnated, as progenitor Dalt Wisney would eventually be joined by a veritable dynasty of acts from across the country.

Speaking at length with the founders of Forever South, a collective/label of artists of the ‘scene‘ in Karachi, Dynoman and Rudoh or in mufti Haamid Rahim and Bilal Nasir Khan, the origins of this movement emerge, taking real root in the Pakistani port city. In recounting these origins, both draw an intricate family tree of rock and indie bands forming and reforming, developing a sort of musical kinship, the individuals themselves undergoing a creative metamorphosis until they eventually grew into acts all now performing as electronic artists. Whether Dynoman or Alien Panda Jury, Toll Crane or Mighty Hook, each of these artists were at some point together members of a band and for that matter, a band in Karachi. Rahim explains, “We all grew together. All of the cats making electronic music right now knew each other from way back when 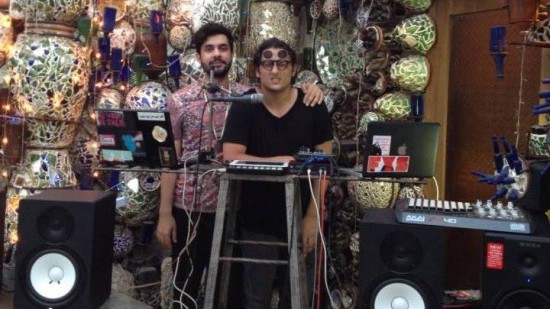 or somehow,” while Khan adds, “That generation of kids is from where Haamid and I come from. It’s almost magical I feel, that at the same time all us friends got into it, it’s been going since we were in bands. Playing drums, guitars, vocals and stuff. And that just carried on, it never stopped. People have been inspiring each other.”

The scene’s shared context was matched by shared idiosyncrasies; kindred spirits brought together by music. In person they come off as smart, au fait and very unassuming, the kind of otakus with samplers under the mattresses rather than lad mags. “Bedroom producers”, as Talha Asim Wynne aka Toll Crane describes them, found that their genre was free of the bells and whistles of session guitarists and recording studios. Their acts of creations were fundamentally individual, of man and machine. The very nature of this genre may have appealed to a certain personal introversion but it also lent to a very independent, DIY streak that was both pragmatic and adaptive as Rudoh explains: “It’s because kids can’t get out of their houses, shit’s bad – people are scared, so what do they do? They pirate software and learn shit off YouTube. At least that’s how my friends and I started.” While Islamabad-based Asfandyar Khan aka TMPST adds, “I think it’s the fact that a lot of electronic musicians in Pakistan also have day jobs, so it’s more conducive to make electronic music rather than find musicians to jam with and then head to a studio to record music etc.” 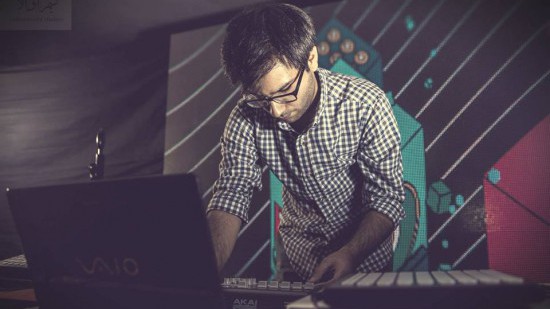 With inspirations ranging from Brian Eno to Radiohead, these artists would attempt to “recreate the music they loved” as Dynoman put it, creating a sound that began placing Pakistan on the world electronica map. The very fact that the genre is so digitally based has translated into a considerable online presence for Pakistani electornica; in fact it exists almost entirely online and without the constraints of labels or even commercial impulses, the scene has made access to their music, through various mediums such as Soundcloud, Bandcamp etc, more important than ownership.

Of course as much as this story is about the individuals responsible for the change in tide, it is also about the city that helped foment the movement. The heady days that Dynoman and Rudoh recount were breezy, salt-air Karachi nights, spent amongst friends and gigs, percolating to the scene it is now. Karachi has served as the de facto HQ for the Pakistani electronica scene, joining other port cities like Bristol and San Francisco in the fraternity that has helped encourage creative new waves. Rudoh puts it down to Karachi being a veritable “Mecca” for “for all kinds of music,” adding that “we have metal, rock, indie, electronic, house, DJs, beats, performers, I mean everything.

” This eclecticism lends to an overall genius loci about the city that has been particularly conducive to the movement. TMPST is conscious of the tepidness of other cities, such as his hometown, adding, “I think Karachi just has more people and more music. I find Karachi to be more receptive to indie and electronic music than a city like Lahore, which still seems to be stuck in very rockist modes of thought. Maybe Karachi’s frenzied nature just lends itself better to electronic music and the constant need for movement and beats.”

Karachi it seems is also deserving of its talent for there is a pronounced difference between it and the other major cities of Pakistan, almost manifesting as a north-south divide; a division between the head and the heart. In Karachi, promoters have been able to find venues such as the Commune Artist Colony willing to host them and support them. But most importantly, they have found an audience that is receptive. Dynoman explains that while initially venues may have been weary, eventually they came round and the same went for the audiences, “We’re slowly seeing the change in our crowd as well. Even at our parties/nights/gigs we get people who are just there to socialise, but every now and then you’ll see those same people who couldn’t stop talking, nodding their heads to the music, and actually tell DJs and performers that they loved their sets.”

While Karachi has served as this cradle for the movement, the same, unfortunately, cannot be said for the rest of Pakistan, pointing to something possibly more endemic. While garnering good press internationally, more closer to home the ‘scene’ has remained the purview of a few, with scant media attention, little air play and besides Karachi, zero gigs or performances. Why response has been so frigid cannot be easily answered but it is one of contradictions and whim. Sister genres like EDM and house have a wide fan base, with acts like Akcent and Edward Maya playing in the country, yet electronica itself appears nebulous and even foreign. Toll Crane feels a possible stereotype is in play, “I feel electronic music has made a certain image for itself in Pakistan and new producers who bring different sounds to the table are trying to change that, but at the same time people who are used to a particular type of electronic music are having a hard time getting used to newer sounds.”

This stereotype has achieved unwarranted stigma as by association the electronica scene in Pakistan has been linked to the kind of unsavouriness that raves are usually known for – pill popping and drug induced highs. This image has turned off potential venues as speaking to the Islamabad-based cultural centre, Kuch Khaas, the management noted a “demand” for electronic acts to perform but said that such performances were “often associated with drug use, which is a reason why certain family outlets try to steer clear of them.” Islamabad-based TMPST who has yet to perform in his own city, said that the concocted image was “an unfortunately prevalent image where electronic music is just house and people get drugged up and dance all night long.” 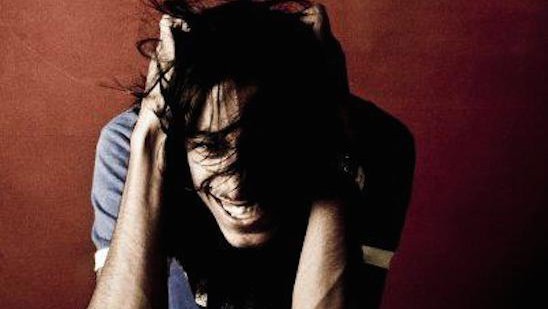 But image issues and finicky audiences aside, the ‘scene’ has soldiered on, doing its thing. And it’s paying off.

As father to the movement, it was only fitting for Dalt Wisney to be the first Pakistani musician to be invited to the prestigious Red Bull Music Academy. Aman Mushtaq (Smax) has also attended and this year Toll Crane will be representing Pakistan at the 15th edition of the Academy being held in Tokyo. The world has also come calling as critics, journos fellow musicians and most importantly music listeners from Asia, Europe and the US have all warmed up to the scene. TMPST’s work for example was featured in some Adult Swim promos. Dalt Wisney has made a name for himself in Turkey, where he has now settled and the Fader magazine recently covered Dynoman’s latest EP release comparing it to the likes of Flying Lotus.

Artistically, if anything of note is coming out of Pakistan, it is this stable of electronic music artists, producers and as this fraternity grows, with new acts increasingly being added to the roster, the beats of this here country are only going to get louder.