We recently sat down (hypothetically – in reality this interview was telephonic) with formerly collegiate psychonaut Rahul Ranganath of the Bicycle Days. Rahul teaches music, all grown up now, raised seemingly underground – the band disappeared directly after their first recording made people sit up and take notice.

The Bicycle Days EP was a quick storm that managed to pull off the impressive twenty five year old thinking-straight-on-acid aesthetic back when its composers were averaging twenty. The question is what they sound like now, three years on – at the brink, finally, of a debut full-length.

We found ourselves both, an answer and an explanation.

There are rumours that there’s an interesting electronic direction this album’s veering toward. Tell us about this.
Don’t get me wrong, but it’s been a long time since the EP came out. We’ve changed a lot as musicians since and the new album’s seeing us move on. There’s a great deal of solid electronic influence on this one. Entire tracks are synthesized.

Is that you trying to buffer the blow that you’ve completely changed your sound?
Basically.

So what are you listening to now? Is there a lot of electronic music on your playlist?
I’d say mostly stuff like Flying Lotus and Radiohead and Eskmo. I don’t think we sound like any of them but these are our tunes of choice at the moment.

You didn’t tour much countrywide these past few years that you’ve been active. What should people who’ve only heard the EP expect from you?
I have little doubt they’ll be surprised – in the best possible way for us, we’ve gone slightly overboard with experimentation on this one and that shows a lot. Of course there’s a part of it that’s still a rush-through with guitars, but there’s part we’ve stripped the instrument down bare and worked around it. Karthik writes the lyrics and those have become barer as well.
It’s not like our thematics slip into minimalism though, or even into songs in a certain key or anything. The process of moving our album along was a lot less structured than you’d be inclined to think, it’s more like going with a feeling. sometimes that ‘feeling’ seems terrible when we return to recording the next day, so we start again from scratch with another. There’s trials, there’s errors. By the time we’re done, everything sounds like it should be on a different album altogether.

Is this a more subtle record?
Subtlety isn’t our forte exactly. We’re either bizzare or boring, there’s no in between.

So the let’s-go-dress-like-Deadheads haze that sang out of your EP…
A part of that psychedelia is present still, but a large chunk isn’t. It’s been replaced. A song from our EP has percolated into this one. There’s been some thick rework on that track. 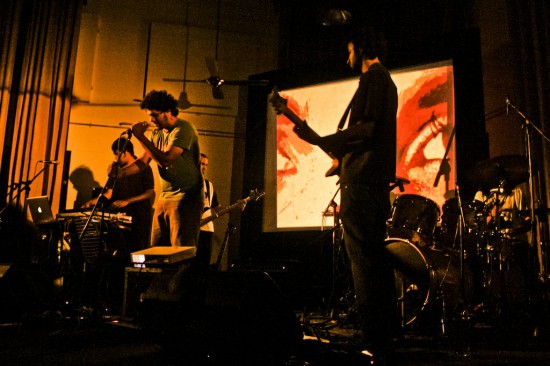 When does the album come out?
Originally in the November of last year, but you know how it is with DIY productions. We aren’t renting out a studio. We’re hoping to wrap it up by the end of January.

Have you chalked any singles down?
We’re working on a video.

Is this the kind of album you can play in the living room to your family?
Well it is kind of a mixed bag, to be honest. There are a few songs that lean into that Universal rating zone, but there’s also ones I’d recommend heard elseways.

…because electronic manipulation is everywhere now, it’s in your classical music and your R&B and your reggae and your post rock and your soup.
People have been looking to synthesizing music for decades though, that’s what’s really influential. We’re not electro rock because we can perform this album in its entirety on organic instruments if we wanted to, it’s designed that way. On tour, of course, we’ll be incorporating the predefined electronic sounds into our ensemble. Sure when I’m producing the album, I dip into the studio for drum loops, samples, effects. But most of this happens before we hit the stage – once we’re on, there isn’t much fiddling going on. So it’s not like we’re using Ableton or anything.

Tell us one thing we don’t know about Bicycle Days.
Our bassist owns a skateboarding company.

Below is an as yet unreleased demo of a track, ‘Hush’, off Bicycle Days’ new album, a bare amalgam of so many influences I don’t even know where to begin. “There’s somethin’ about,” the lyrics say before drowning into Joe Newman’s uncanny post-’12 Indian echo, “silence.” Two things are immediately apparent – that the psychedelic southern men have, indeed, stumbled into another phase that’s completely unlike their debut EP’s, and that adulthood hasn’t dulled their propensity for good music.

We’ll be honest – it’s not groundbreaking, but it’s certainly delightful. The music may taste more dated 90s now than the fresh 70s we’d gotten accustomed to – the charm, however, is snug and intact. “This is probably the most electronic we’ve gone,” Rahul Ranganath told me. If it’s anything to go by, we can expect more pleasant hymns tuned to our favourite stoner frequencies this coming album regardless of where Bicycle Days goes next.