The title dates back to a group of rogue enthusiasts, who would strike at anything brittle enough to break, anything that put X amount on the table to put on a show a show for friends (of friends, of friends). The venues were questionable, the permits were few and the sub-culture was far from definition. The results however, were in-bred.

The appetite of the pack would soon heighten. D.I.Y. pride was traded in for labels, managers and top-tier venues, all following a systemized hierarchy. The artist now has a better environment to thrive in so long as he signs on the line. Make no mistake, unless the need for promotion requires otherwise, India now has a full-fledged alternative music scene.

That’s precisely where popular local music website/blog NH7 come in. The website has tracked every last shift in the definition of indie India has learnt to honour, for better or for truth: they’ve given the scene a collective voice. Last year, NH7 proved that there was an audience for this conscious brand of independent music when thousands flocked at their premier festival, the NH7 weekender. And now, they’ve sparked goodwill with the launch of their flagship store dedicated to independent music.

Shreyas Shah, CEO of NH7’s parent company, Only Much Louder tells us why this will work.

Taking Flyte: NH7 has been selling independent music through their blog directly, for years. It must mean something to them if they choose to collaborate. In this case the 4 million monthly users of popular Indian online store Flipkart. “ When Flipkart launched their digital store Flyte, I reached out to them to discuss the possibility of NH7 curating the independent music section on it,” says Shreyas. “The reach we could achieve by building on a platform like Flipkart is massive and we want independent music to be available to a whole new segment of users, so we decided to drop our plans of a separate store and launch this in partnership with Flipkart.”

Family Values: “We collect the net amount from Flipkart and then distribute to the artists based on individual sales.” Shreyas reveals, on the business model for the store. “We keep a small percentage of the over all sale to run the store, the rest is passed on to the artists.” The store currently features 49 albums and 345 tracks amongst its diverse roll call. From veterans like Midival Punditz, Indian Ocean, and Pentagram to nu wave smashers like Skyharbor and Scribe, everyone’s equal here.

Rehabilitation: With thousands of bands vying for the stage in Mumbai now, under an independent stance, would quality control ever be an issue? Shreyas seems to think it beneficial, if not an invitation to mould better artists. “It’s a good problem to have!” he beams. “All independent music can be put on the store, the only limiting factor is the production quality. If we feel that the production quality is not good enough, we let the artists know and point them in the right direction to improve it.”

The Road Ahead: The store is the strongest move the scene has played in years. But what happens after everyone’s listening? “We promote albums on the store regularly through our editorial content and also through social media,” Shreyas answers. “Other than this we are also working on putting out weekly podcasts which introduces our listeners to new artists and then allows them to buy the featured music on the store.”

“I envision the store to be the destination for all items related to independent music and leading edge culture. We have already started putting up physical CDs along with digital music and in the future we plan to add merchandize to the store as well.” 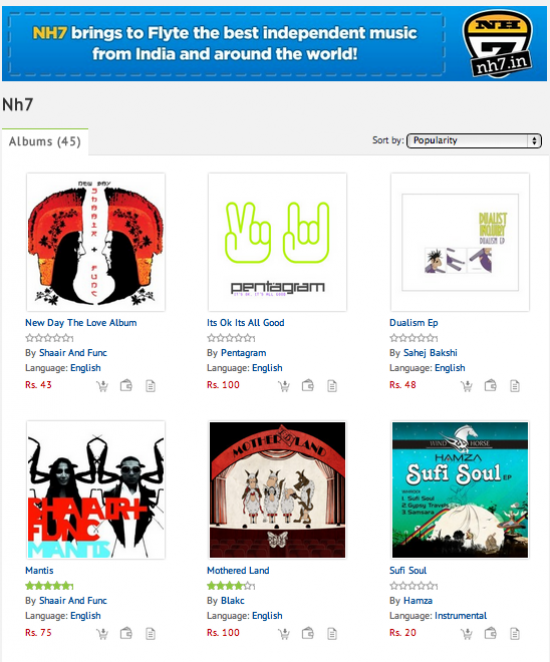