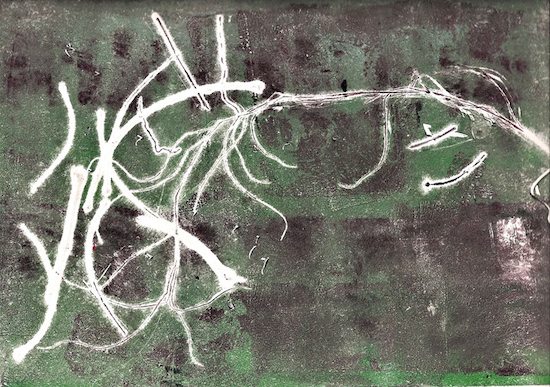 Like an ocean of formless waves, her sounds seem to dissolve and emerge to life in perfect harmony from the most cryptic corners of her consciousness. Evoking celestial mystery with distant riffs and dark chordal symphony, her music is a radical collage of emotions and memories. Ever and again, it almost seems as if she tries to ascertain singularity at the origin of an idea and let the piece build itself until intuition leads it to an end. Almost like a fragmented spirit in pursuit of an honest connection, most of her compositions work in tandem with low-drifting melodies and the romanticised grandeur of the dark. While her songs portray the grit of a wanderer; hidden within the spiraling chords and meditative rhythms is the story of a journey waiting to unfold.

“To credit my reality to anything more than a figment of self-conscious imagination would be unfair and vain. The dual singularity comprised of countless multitudes, making me next to non-existent yet an essential part of the cosmic mind, has somehow had me do the things I do. I think music has been with me from the very beginning. In chaotic times, I felt a growing need for isolation, and the one thing that I have bonded most comfortably and honestly with, is music. If there’s anything that has helped liberate my ideas honestly, it is the art of letting go. I attempt to approach music without any sense of judgement now,” said the 24-year-old artiste who also indulges in illustration, graphic design and photography for a living.

Ramsha believes that any concept that enables her to connect with another individual intuitively allows her to look past any physical reality. And, perhaps it is this mystical experience that has helped her understand her own reality beyond any empirical veil. She also feels that as we strive to be true to the nature of our reality, our ego begins to dissolve, and we learn to look beyond the good and bad, right and wrong, and eventually our individualism disintegrates and our essence prevails. “I think that the most challenging thing in the nature of human beings is the existence of an ego. All our lives we live under the illusion of feeling the need to establish an identity of our own, when the insignificance of our existence in the cosmos continues to remind us otherwise with every step we take further in discovering it. The magic lies in the essence of our reality. As Mevlana Rumi once put it: Your mighty “Thou” which is nine hundredfold; Is the ocean, the drowning place; Of a hundred “thous” within you,” said the artiste who further added that musicians must empower themselves to purify their thought process to produce art that wouldn’t need a USP to connect with people. For, any art can become the most honest mode of expression, if delivered with purity and intuition.

Most of her songs segue into a void-less space where mind and matter cease to exist as separate entities. Sometimes, amidst the soft yet compelling resonant spaces, one can feel the polarity of organic textures thriving in shadows. There’s undeniable angst and nostalgia suspended in melodic passages as she delves deeper into a soundscape that’s both intriguing and obscure to a conventional structure and musicality.

For instance, ‘I am Listening’ is reminiscent of a mournful guitar (warmed up mid-range tones) narrating its woes to the listener. There’s depth and melancholy dissolved in its musical spheres. And, although the song isn’t heavily layered, rhythmically, there’s a mellifluous merge of space and time within its contours.

On the other hand, ‘Eden Sank to Grief’ a track that features on her latest EP ‘Daastan-E-Marg’ features bowed guitar accounts for the lead, while the rhythm comprises a delayed synth. The EP is a compilation of her experiences in the past two years. “Daastan-E-Marg translates to Story of the Demise (or Death). I started working on this EP during a difficult phase last year. It’s not necessarily gloomy; there’s use of weary atmospheres at a few places,” said the musician.

With ‘Saudade’ , however, Ramsha has managed to generate ambiguity and cloak a fog of sadness that surrounds the word in itself; Saudade is often assosiated with a feeling of longing or melancholy. “The eeriness of the chorus in this track excites me. The one interesting thing about the murk in it is the fact that I composed the song inside a pretty gloomy basement,” said Ramsha who wishes to perform live and incorporate interaction design into her acts. In fact, one of her future projects will also celebrate the unity of astronomy and music.

Shaping up an identity

Living in Karachi, and constantly moving from one neighborhood to another played a crucial role in helping Ramsha broaden her understanding of the different classes residing in the city, their differing ideologies, and the similar dogmas they all faced that were usually packaged differently. And, yet, everyone continued walking alongside each other as though they had completely contrasting identities. “Karachi has a big heart. It embraces people from all over the country. The spark of intent to stay alive persists, despite innumerable tragedies, dogmatic mindsets and delusive perceptions of happiness in its people. It continues to grow more and more selfless as the people grow more and more immune to the pain and misery. I just fear that if this continues to happen, indifference will strengthen its roots here and the city will die,” said the artiste who further added that the lack of venues in the city where artistes can perform without any qualms has perhaps led to several drawbacks in the past.

Though things are improving, she believes that people from all parts of Karachi are not given equal opportunities. There is also an urgent need for more venues where artistes can afford to experiment reasonably, encourage each other to exchange interesting techniques and collaborate more openly.

Although the situation is discouraging experimental/indie musicians from making quality live music, thanks to the likes of Lussun TV , musicians in recent years have gained inspiration and begun to experiment and produce more. According to her, artistes like 6LA8 have consistently managed to dodge constants in their music and proven to establish their identity as an ever-evolving entity. However, she also feels that Pakistani electronic musicians need to constantly broaden their horizon of influences and that would work wonders. “We need to embrace each other as musicians without prejudice. Since we live in a society where weddings and funerals take place side by side, we won’t need much work in colouring our expressions truthfully,” explained the artiste.

Despite the grim reality of a weary present and an uncertain future; and despite being shrouded in moments when courage wanes and humanity loses its grip on sanity; cradled in the arms of music, Ramsha sees nothing but flickers of hope and the promise of a purposeful tomorrow. “The mellowness in our music simply reflects the state of our people. There has been a lot to mourn about recently in the country. I would definitely want this to evolve into betterment,” said the artiste and added, “All our nation needs is inspiration every now and then, and a few artistes in the recent past have exactly brought that which is why versatility and innovation is visibly audible here, once again, after a very long time in Pakistan…”