She’s clear that Madanii, her project with producer Lucas Herweg, isn’t merely an exotic outlier or a nod only to her cultural roots. She wants to steer clear of any invocations of the rather problematic labels of “world music” or “ethnic music”. In fact, she’s often been asked to accentuate or ‘over exoticise’ the eastern elements in her music, which she’s firmly resisted. “There are other sounds that are not western. It can be interesting, contemporary, fresh, and stand for something. And still be accessible and suitable for people to listen to. My own position is that I was born in Germany, grew up in Germany; my cultural context is entirely western with a glimpse from my Iranian heritage. I want to try to represent that culture in a way that is respectful, even if I don’t want to be seen as a ‘foreign culture representative’. But I will be, because of how I look. I don’t look like the others.”

Musically, Zarrin, 28, finds inspiration from both western and Iranian styles of music, creating a sound that’s dense and dark, developing a contrasting pull-pull dynamic between the two worlds. It’s nominally pop music with a focus on the voice, backed by an electronic spine and bass-heavy sounds as well as traditional Iranian influences. “I really like the idea of having an accessible pop song, but with an undercurrent. Something contrasting against it,” she says. Underneath the accessibility, the easy-to-digest melodic flourishes that she excels at, lies a kind of heft. Some sort of darkness.

The most recent Madanii release, in March, is ‘HOLES/MVNIA’, a two-song split with an accompanying music video that’s been co-written and co-directed by Zarrin (with Anette K Hansen). It blends into the identity of Madanii, which extends beyond the music. “I’ve always been inspired by artists that are three-dimensional; it’s not just the music. I’m a very visual person, and I think it just opens up another sphere you can be creative on, and combine those things. In the videos [for ‘HOLES’ and ‘MVNIA’], it was the idea of creating something eerie. Not necessarily disturbing, but something odd. I worked with very light colours, a little pink, very pastel. It’s just another way for me to show the paradox, the contrast. Between Iranian and western culture, balance with beauty. It’s what I want to say and bring to the audiences.”

The video follows the lyrical narrative of the songs. ‘HOLES’, through a motif of digging and burying, is about putting on a brave face and hiding your true emotions. “It’s a circus, a shallow impression sometimes.” Zarrin is now based in Berlin, a place that is culturally open-minded, accepting, and tolerant, but it draws from her experiences growing up. “It’s about feeling ostracised. I didn’t have a very happy teenage life. There was this immense feeling of not belonging. I grew up in a conservative part of Germany, where my sister and I were the only brown girls at our school. There was always this distinction between ‘us’ and ‘them’, not from our side. It’s not ‘open’ racism—they wouldn’t use those phrases like, ‘Go back to where you came from.’ But it’s racism; it’s somehow…they make you feel like you’re ugly or not loveable.” 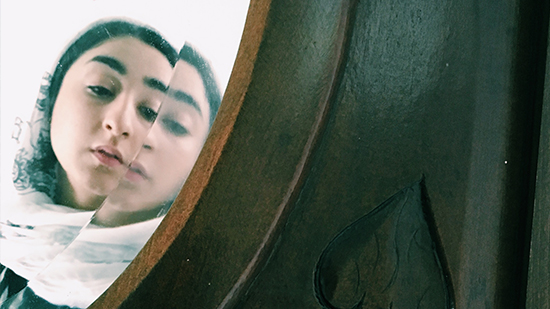 ‘MVNIA’ is an extension of that same thought, a more outward-facing expression of it. It’s about the so-called western beauty norms, which are codified and promoted in the media. “It’s not even ‘beauty’ standards; it’s just western norms. Everybody who doesn’t fit into that feels bad, like there’s something wrong with them,” she says. Zarrin, through her voice and her music, is railing against these stereotypes, these notions that exist in society. It’s a big part of her music. About identity, about looking different, about belonging, about fitting in and standing out. The intent isn’t to be a “voice” but to say what needs to be said—she tells me how her reach is still limited but her work has resonated with other women of colour in Germany, who’ve understood and related to her experiences.

Fittingly, serendipitously, Zarrin spent a month in Iran earlier this year, as part of the Border Movement Residency. She shares a complicated history with Iran, which involves a grandfather who was a general of the Shahs, her parents moving first to Turkey and then Germany, and the CIA! She’d only been to Iran once before, and this time too, she could only visit using her Iranian passport, rendering her both a tourist and a native. “I didn’t think it would be this very clichéd, ‘back to the roots’ kind of thing, but when I was there… It’s not even that I ‘belonged’—I was so German! In a way not fitting in. But I did speak the language, and people could connect with me in a way they can’t with other tourists. It was just about walking around and seeing people not look at you. I’ve never experienced that before, to know that you cannot be singled out in a crowd. I hadn’t even thought about that; it’s not that I feel alien in Germany, or I don’t belong, or people single me out. It’s not on my mind constantly. But there, it struck me—it was a surprise. It’s very interesting, how they act, how their bodies look, how they use their hands when they talk, the sound of the voices. I do all of these things, and have been singled out for it here, but it was very comforting to see that on such a major scale.” 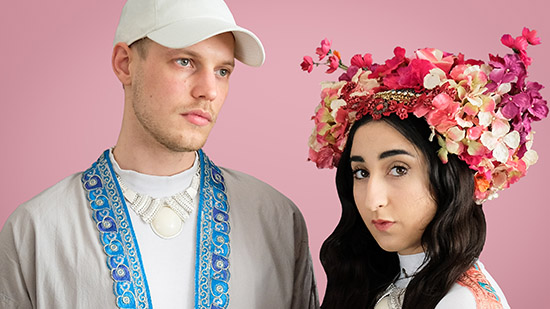 She tells me how the entire experience was “immensely inspiring”. Her initial plan was to connect with female musicians in Tehran, learn about their struggles. But given her limited time there, and the fraught situation that female musicians in the country have to contend with, the opportunities to explore this thought were limited. She decided to travel to the south of Iran for the first two weeks, soaking in the architecture and the design. “I was collecting as much as I could, and talking to people. Gathering—not information but experiences. And reconnect with that side of me.” Upon returning to Tehran, she wrote everything down, making outlines for stories and songs. “I also sorted out the visual inspirations I have; something had clicked into place.” She spent time with musicians in Tehran, learning about Iranian music and gathering influences and material. “I’d basically spent my academic life studying and learning about western music, the classical era, how things work. Even from a political and sociological point of view. But in Iran, all of this works in a completely different manner that I know so little of.”

Zarrin was then at a crossroads of sorts. She found herself writing a lot, but felt she needed to capitalise on her time there. So she left on a solo trip to the north of Iran, soaking in as much of the culture as she possibly could in her last week, before returning to Berlin. “My Mom comes from that side. I was by myself, I did this myself. So that was also an important experience for me personally.” In Tehran, she began outlining an album and the topics she wants to confront, imbibing the musical influences she came across. She’s putting everything together. In the meantime, she has existing music with Herweg that she wants to put out, but her time in Tehran is something she wants to preserve through music, which she intends to write and produce all on her own.