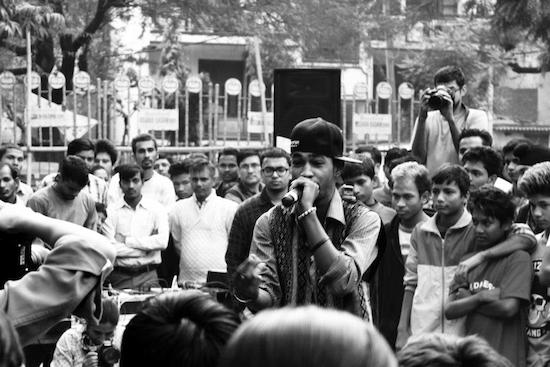 Ignorance breeds racism and ethnocentrism. And India happens to be home to some of the most racist and ethnocentric people in the world (current Prime Ministerial candidate included). How then can the majority not hate rap? They hate almost everybody African anyway. Some Goan minister just equated Nigerians to cancer. And down here, we’ve got a fucked up, chronic disease of ignoring our own flaws. Along with some other countries dearly in need of a revolution, India should ideally be a hotbed of provocative lyricism, 808s, and loud-as-fuck guitars, but like Ritwik Deshpande points out at the end of his piece, nobody really gives a fuck.

Most hatred against rap is born from ignorance.

Rap music and electronic music are not as alike as you’d think. Whereas electronic music, just like rock music, is rooted in melody from a real (or software) instrument, rap music comes from the rhythm of language, from tribal poetry, from chanting, from a culture in a country in which it is deep rooted i.e. Western Africa. Culturally, Indian music, much like rock music, is also rooted in melody. If studies that delve deep into the biological basis of music, and if those on tonal and harmonic contours being representative of different parts of the world are to be believed, Indians are not “meant to connect” with rap music organically.

Dave Chappelle did a great sketch called ‘White People Can’t Dance’ on what music turns which people on, what make them bust a move. Electric guitars for white people, drums for black people, electric piano for the hispanics. It’s a generalisation, but it’s Dave Chappelle. You learn. I’ve learned that the sound of a dhol actually does get Indian people moving organically. Make your own observations at the next festival where dancing on the street is a mandatory part of celebration.

In the aforementioned piece, AP is quoted saying (of aspiring Indian rappers), “They couldn’t fully relate to that shit: they were neither rich nor resentful toward their mothers. The inspiration was just not strong enough.” Here I disagree, if guys like Eminem and Jay Z are here to inspire (they claim to do and they do), isn’t it just a question of what to be inspired by? Hip-hop lyricism has enough in it to inspire people enough to not kill themselves, and needless to say, its messages are strong and unique if you pick up on them. So, the inability to understand “street” or “foreign cultural references” should not really be what alienates a foreign fan, because inspection and study of lyrics in rap music is immensely rewarding and opens up a whole other side of rap music to a head or would-be-head.

Incidentally, I was with AP and Heems at The Bagel Shop that afternoon. When Heems asked AP about what other hip-hop he liked, AP says he doesn’t really listen to hip-hop. As shocking as the statement was to Heems, it was news to me as well, because I talked music with AP for a good year or so when we worked together.

AP’s the biggest Das Racist fan I know. If Das Racist had a target audience, AP is it. Das Racist for sure didn’t invent anything new in hip-hop but they’ve managed to turn somebody on to a type of music by using closer-to-home cultural references, a smattering of Indian rhythms and beats, and lyrics that talk college-student-life and something called “meta”. To this day, I don’t know how meta became a word of its own and in the hip-hop context, it’s just confusing. I feel I’m better off not knowing. Feel free to blame my ignorance. But let’s talk get back to context, because a lot of people don’t get it.

So how do you understand context without using a resource like Rap Genius? Take a big mainstream rap artist’s most personal, introspective album. Listen closely, try and understand where the guy’s coming from, what he’s about, and then you’d have a better understand of why they rap, what they rap about and why perhaps those Dayton Rims were so important to them at that point in time? Nas’ latest Life Is Good will explain a lot of early Nas. Ready To Die will take you through Biggie’s life.

They’re all eye-opening. But since we’re talking mainstream appeal to the Indian mainstream, let’s talk about Eminem. He’s got three personas. So, you wonder why he’s acting so fucking crazy on The Real Slim Shady LP? And why is he so damn confident of ruling the rap world on The Eminem Show? You need to know who Marshall Mathers is for that, and you can do that on not just two, but three albums (the deeply personal Marshall Mathers LP, and its just-released sequel The Marshall Mathers LP 2, with 2010’s Recovery being perhaps the most introspective).

So ask yourself, have I – Ever fucked up in school? Chased tail shamelessly? Knocked somebody up? Lost a job? Gotten a drug habit? Bar fight? Girl got away? Old friend overdosed? Best friend fucked you over? Parents separated? Is your Dad an alcoholic? Three months sober? DO YOU DISTRUST THE GOVERNMENT? Do you feel strong now? Eminem talks about all of that and so much more. And to think, we can totally relate to more of what he’s gone through than we can to somebody like, say, Josh Homme or Dave Grohl.

Like Ritwik similarly pointed out, words are the foundation of rap music. They are the lead-in, the body and the conclusion to everything that’s really contextual in the art form of straight rap. As a head, verbal texture in rap is a study in itself, and personally, other than studying hip-hop lyricism, I’ve never felt the need to ponder how soft or hard dude came off when he began that verse. Honestly, that shit’s meant to be felt in its calmness or intensity (keyword: felt).

But, you just have to feel the change in tone of voice when Eminem (not Shady, not Marshall Mathers) starts the third verse on ‘Rap God’ at 02:54. This is the lead-in where Rap’s God, Eminem, tells people exactly why he’s a Rap God. Even though the words are heavy and kinda self explanatory, “You’ll be Thor, I’ll be Odin, you rodent, I’m omnipotent”, it’s the vicious intent in his voice that gets you. You can tell he’s going in for the kill just from that tone of voice. And he does. It’s usually stuff like this that a head picks up on. And it’s very exciting.

There may not be any full-time Indian rap artists directly addressing the Indian listener, but there are hundreds of full-time rappers around the world addressing fundamental human behavioural problems through introspection in their own music. There is a lot for Indian rappers and listeners to learn from the side of rap music, the one that doesn’t rap about gold chains, Patron, greenbacks and Louis Vuitton. To the average Indian person, rap music is not even music. For all we know, to the average listener in an Indian b-town, a rap song could sound like political commentary over a beat (how bad could that be?). In so many cases, it is, and because of ignorance, U.O.E.N.O.

written by A. Meer
Image: ZaN by Tiny Drops <3 Khirkee