nu age of lau is a formless collective: one that has no defined sonic contours. It draws its influences from sacred art, natural and religious world. “The name is whimsical in a way. Lau is the Sri Lankan mispronunciation of the English word ‘love’. It indicates a certain kind of cultural reflexivity. Our interests vaguely deal with spirituality/religion, ecology/nature and romantic love. But we also want to pay attention to the fact that we make music with our bodies (using the human body as a resonant body) even though we spend a lot of time pushing buttons, twiddling knobs and staring at screens,” say Dinelka (sonic art and production), Shafni.A (vocals/lyrics and production) and Inca.H (visual art and vocals/lyrics) who form the core of the collective.

Leading melody with sense and sound, their compositions abandon familiar phrases of structure. Through overlaid tones and textures, there rise moments of repose between crumbling melodic passages. Sometimes, they choose poya days (full moon days) to work on certain songs. Their process embodies Islamic, Hindu and Buddhist traditions in their entirety. While Dinelka is Buddhist albeit not an orthodox Theravada Buddhist like most Sri Lankans, Shafni is Muslim and his inclinations lie towards universalism espoused by the perennial philosophy. Inca, however, is open to spirituality in its various forms but is particularly drawn to psychedelic shamanism. 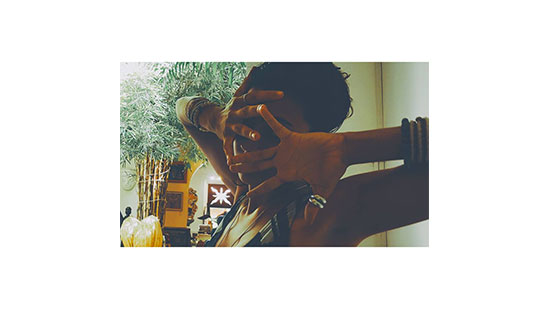 Together, they believe art makes their lives bearable if not magical. “These religions are not merely intellectual or artistic interests but we also live and breathe its localised cultural ambiances and rituals. We moon gaze, pray and meditate before working on some songs. We go to the mosque, visit darghas, do dhikr (devotional acts in Islam in which short phrases or prayers are repeatedly recited silently within the mind or aloud). A lot of the lyrics were written before dawn and after prayers harnessing the feeling of that time of the day to inspire the words. We also go for walks into the woods, touch trees, eat mushrooms, make love, feel, sing and chant before and while creating songs. Engaging with the elements and various natural objects creates specific subjective feelings. We make sense of these feelings within the context of different religious traditions or philosophies. Our understanding and interpretations of them factor into the music we make,” they say.

Their aliases, they explain, are local names of plants that are either endemic or native to Sri Lanka — Yakada Marran (Syzygium Zeylanicum), Kudu Dawula (Neolistea Fuscata) and Katu Imbul (Bombax Ceiba). These names resonate with who they are. There is a sensuous approach to the way they craft their sounds. “The sensual and spiritual are not dichotomous. We work with the premise or assumption that the capacity for awe and spirituality is a biological one with our experience of love being the most obvious. We believe human beings are hardwired to engage infinity,” say the trio who explained that their vocal elements try to deal with rapping as an embodied thought that is exhaled. Such thoughts, they reveal, come from a place Charles Olson described in Projective Verse where breath comes from, a place where breath has its beginnings, where drama has to come from, a place where the coincidence is, where all acts spring. 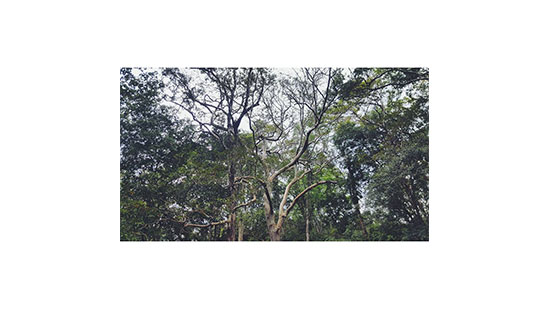 A palimpsest of ancient memories: their songs represent layers of emotional expression. Some propelled by experience, some abandoned by thought. Their music pays homage to romanticism as an art movement. It was Virgil Thompson, the artistes say, who once said: Neo-Romanticism involves rounded melodic material (the neo-Classicists affected angular themes) and the frank expression of personal sentiments. That position is an esthetic one purely, because technically we are eclectic. Our contribution to contemporary esthetics has been to pose the problems of sincerity in a new way. We are not out to impress, and we dislike inflated emotions. The feelings we really have are the only ones we think worthy of expression. Sentiment is our subject and sometimes landscape, but preferably a landscape with figures.

Music as an embodied thought

In ‘libr (a) ries, forests’, soft intonation of ominous chants lead to broad aural collages that fade into nothingness momentarily before words punctuated with rhythmic motifs glide through the track’s structures. “This was created during the full moon when Aries was in Libra,” say the artistes.

On the other hand, their latest EP ‘a good word, a good tree’ was released during the holy month of Ramadan on the Adhi Poson full moon Poya day. “All this is an important part of the process even if it cannot necessarily be deduced from the music itself. The tea ceremony is as important as the tea that is made and drunk. We try to be conscious (although not always successfully) of the fact that we are implicated within and literally are: infinity, the breath of the merciful (nafas al rahman), the dance of Shiva and the constant creation and destruction of the universe while we work,” they explain.

Unlike their previous record that was inspired by the moon and night, ‘a good word, a good tree’ revolved around the day and sun drawing heavy influences from African Afrobeat inflected dancehall and reggae. “Reggae music is about Jah, love and enjoying nature,” say the artistes, “It is religiously inclined music. The seas and trees heavily factor into it. Our lyrics are also inspired from the traditions of Sufi poetry. Our sound tries to play with the sense of eroticism we find diffused throughout nature. Sexual selection is an engine of beauty, a miracle of artistic production that creates ever more novel and beautiful forms in the biological world from a peacock’s feather to the human capacity for language, poetry and music (for art itself).”

Apart from creating sonic art for nu age of lau, Dinelka is also working on a project with Shafni and Rushinee Fernando (who makes music under the alias Hygy Hair) called Snake Babu that has similar nuances as the ‘collective’ but is ‘decidedly’ darker. There’s also a sonic art/noise music project in the pipeline alongside Harshan Gallage. Shafni, on the other hand, has released an EP titled ‘Kompannavidia AF’ under his moniker Toc Toc Baya with Tomcat and Magnum. He is also in the process of publishing a book of poetry with his pen name Benny Lau while Inca is working on a new series of paintings which focuses on feminine psychology as it is embodied in nature.

In Concerning the Spiritual in Art, Wassily Kandinsky wrote that art for art’s sake leads to a neglect of inner meanings. He said: If the artist be priest of beauty, nevertheless this beauty is to be sought according to the principle of the inner need, and can be measured only according to the size and intensity of that need. “Our explorations are definitely changing us. It gives us purpose, and even fruitful ways of channelling and harnessing our obsessions. It also allows us to indulge in making ‘meaning’ and perhaps making it magical in the process,” say the trio, “We don’t know if we are pushing sonic boundaries let alone making sacred or spiritual work. We are hoping to be sincere and pray that we are blessed with currents from the divine presence through the microcosm or macrocosm as we try to make something worthwhile…”