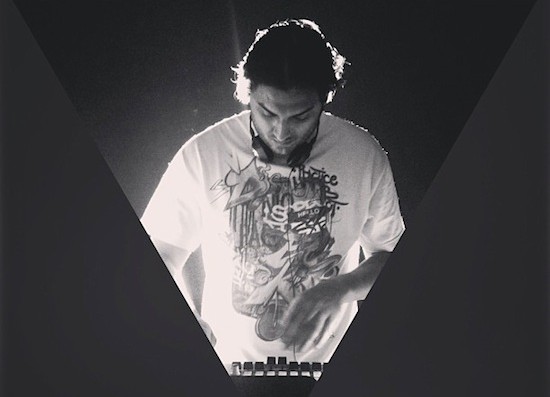 Aside from initiating Pakistan’s first electronic music collective that focuses on underground electronic talent [See: Forever South and be inspired], Karachi based- Haamid Rahim aka Dynoman, has been making beats that reflect a distinct South Asian, experimental-electronica vibe. He recently rigged up a brand new live set which we took a little look into:

You’ve recently started playing live sets, what’s your set-up like?
For my live sets I have been mainly using Ableton Live. I use a Focusrite Scarlett 2i2 USB sound card and route my computer into that. This is then given 2 channels on whichever mixing-board our sound guys (AMP’D) provide us with. I use an APC 40 to control Ableton and usually clip launch in session view.

What’s your process like when it comes to pulling your studio productions into your live set? (Or does it work the other way around?)
I have tried a number of different methods to bring my productions into my live set. When I initially started out I separated my stems into 8 different channels (maximum number of channels you can play on one page of the APC) and then would make them into scenes. These were usually 4 bar loops which I would then either improvise some clip launching or I would control the sound with dedicated filters that I made for the different stems. I would group stuff like synth chords, synth leads, bass, percussions, one shots, samples, bass, and hi hats together.

It was based off a set that Tom Cosm had made but I took my own spin on it. This method took up a lot of my CPU so I changed it around and these days I’ve been doing it differently.

I now have different loops all laid out that I bring in and out at different times and improvise some live melodies with percussion and synthesizers into my live set, while using filters (I love filters!) to make the loops do some crazy things.

Digital vs. analogue input in your live sets – any thoughts?
Both analogue and digital have different sounds and feels during a live set. I’ve been playing around at home with my SP 404 in terms of playing a live set with it or incorporating it into my live set alongside Ableton but have not found the proper balance for both the instruments. Right now I can achieve what I want to achieve live via digital means though I am exploring analogue methods to add a different flavour to my live set as well.

Your biggest challenge keeping it live would be?
Not doing too many things! I like surprising the crowd and challenging myself live a lot so that is often my biggest downfall. When jamming at home I’d do these super long big build ups to only find right before I drop the song into a beat that there’s too much going on for me to handle at one time.

Sneak peak into your studio: what gear are you using to make music?
I have a very small/modest studio I use to produce my music. Right now I am using a MacBook Pro armed with Ableton Live. I have an Axiom 25, a par of Alesis Elevate 3, a Scarlett 2i2 USB, a Roland SP 404 SX, and a Tascam DR-40.

Wish list gear for 2013?
I would really like to upgrade my soundcard, monitors, and get an analogue synthesizer. I really like the sound of the Focusrite preamps so upgrading the 2i2 to an 8i6 would be something I would like to do this year. I would really like a pair of Yamaha HS 80M monitors and I found a Roland JUNO-Di Mobile Synthesizer on Amazon but there is only 1 left!

Your long-term/next-in-line vision for Dynoman *Live*?
To add more analogue elements to my live set and to learn visuals so that I may incorporate those better into my live set. Visuals I feel are a very strong part of a live set for the music I do and they play a strong role in the next album I’m working on. Hopefully I can figure out a perfect medium between analogue, digital, and the right visuals for my future live sets.

One response to “DynoMan – In The Studio”