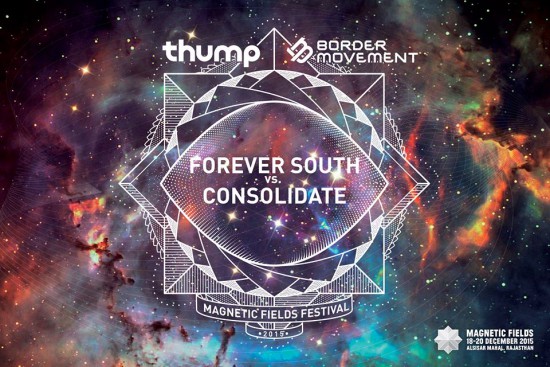 Magnetic Fields’ Border Movement Showcase Brings Together Artists from Across the Subcontinent.

This year at Magnetic Fields, the Border Movement supported music festival taking place in Rajasthan’s Alsisar Mahal on December 18th-20th, a panoply of global talent, from the American Ratatat to the Dubai’s 246 Cru will be descending upon the palace. But closer to home, Border Movement in collaboration with THUMP are excited to present a showcase of South Asian talent, curated by two of the subcontinent’s finest curatorial forces, Forever South and Consolidate.

Forever South, is a Karachi based beat collective that aims to create a space for live electronic music in Karachi while simultaneously acting as a conduit between compelling electronic talent and the rest of the world. The collective will be represented at Magnetic Fields by Rudoh (who was forced to miss last year’s festival due to visa struggles) and TMPST, multi-genre musicians who create the kind of layered and contemplative low-tempo bass heavy music that many might find more suited to the headphones than the dancefloor. You might be familiar with Rudoh from his work on Sickflip’s Ladakh Project Remix EP, and the two artists at times find an overlapping sonic space.

Rahul Giri, the sound behind Sulk Station, otherwise known for his production under the moniker _RHL, will be representing Consolidate, the Bangalore based music collective that he founded and helms. The idea behind the collective was to shift the focus of an Indian music press that tends to focus on what’s coming out of Bombay and Delhi, “The original idea behind Consolidate was to share music coming out of Bangalore,” _RHL said. “As of now Consolidate is a collective, a pseudo music blog and a mix series. But things are going to change a bit in 2016, [when we launch] Consolidate as a record label with Anirudh S Menon’s (Machli) full length debut.”

The participation of this Bangalore based Nepali will make it a South Asian hat trick for the Border Movement showcase, a rare opportunity for cross border collaboration in a time when visa politics often trump gig bookings.

The Border Movement and THUMP supported showcase will highlight some of the most interesting talent that has been featured on the blog’s pages. TMPST points to the way that Border Movement has facilitated communication between electronic artists on the subcontinent: “More than anything else it’s helped me personally in terms of having the ability to showcase my own music … beyond our own immediate circles. I know Rudoh and Dynoman have had opportunities to play in Sri Lanka, as has Toll Crane, and I think we’ve all benefited from these experiences.” Rudoh agrees, telling us that “they’ve been behind us 100%. … We can’t thank them enough for what they’ve done for the whole collective.”

Here in India, _RHL also highlights the role that the website has played in bringing together the regions more established artists with those who are only just beginning to be exposed to the wider world of electronic production, “I was lucky enough to be part of BM’s SoundLab in Dhaka where [Sasha Perera, Gaurav Malaker, and I] worked with a bunch of up and coming producers from Bangladesh. The workshop focused on production, performance, and culminated in live performances by the participants at an event – for a lot of them it was their first performance in front of an audience. I would have killed to get an opportunity like that when I was getting started.”

At Magnetic Fields, however, the opportunities for collaboration and musical crosspollination will be even wider. TMPST points to his excitement at seeing international acts such as Objekt, Shigeto, Kutmah, Palms Trax, and Mumdance, telling us “I’m definitely excited. It’ll easily be the most unique place I’d have ever played in!” And despite the fact that the showcase is being billed as Forever South Vs. Consolidate, all of the artists involved were eager to point out that they view the event as an opportunity for collaboration, not competition. “I know there’s the whole ‘versus’ thing going on,” TMPST told us, “but from my interaction with Indians I’ve felt nothing but love and respect for the music we’re trying to make this side of the border. The same applies for Pakistani music – there’s immense respect for the acts coming out of India at the moment.”