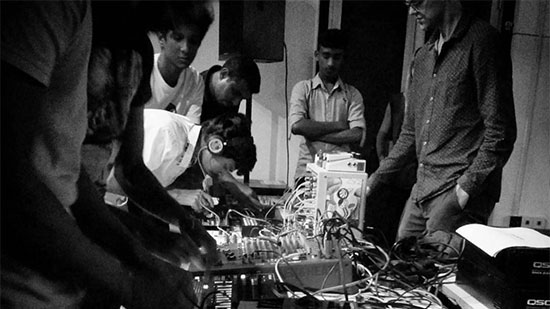 “Ever since I was born, I was told about war. Sometimes, my mother feared for my safety and didn’t want me to step out. Bombs would go off at odd hours. And, people were always scared. It was a terrible war. Some lost their parents. Some lost their children. Artists never performed outdoors or indoors back then. Moreover, the government refused to approve permits for big festivals. However, there were a few musicians who continued to make music despite the war. They spoke to us through art and perhaps that’s why we are able to do what we do today. There are many who gave up owing to lack of opportunities. But I hope to continue making music till I die,” explains Dinelka Liyanage, a Colombo-based experimental musician who crafts extraordinary aural experiences through minimal and ambient sounds.

While Sri Lanka battled a decade-long civil war that ended in 2009, the aftermath of the devastating conflict continues to haunt its soils even today. At the end of the colonial era, the strategic fuelling of ethnic division resulted in complete disruption of the nation’s social harmony. Perpetuating sporadic cases of institutionalised political violence, the era marked the development of brutality within the country’s socio-cultural identity.

“As an experimental artist, I am inspired by the social scenarios in my country, yes. But it never limits or restricts my process, it never could,” says Dinelka and adds, “Music has no race, it takes no sides — this alone is revolutionary enough in a world that’s focused on drawing lines. True listeners fall in love and this feeling is what connects us to each other through, across, over and under the boundaries the society so diligently places for us. Many musicians are selfless with their creations. Their passion sets the tone for much of the change that sometimes takes up their entire lifetime to come about. But it comes nonetheless…”

He also feels that things are moving at an exponential pace in the country with more and more individuals lending their support towards nurturing a meaningful dialogue between experimental artistes and those who advocate a musical space that upholds their traditional ethos. And, despite the numerous challenges imposed on progressive artistic expressions, he strongly believes that music could be used as a revolutionary tool to bring about a massive social transformation in any society crippled by immorality. 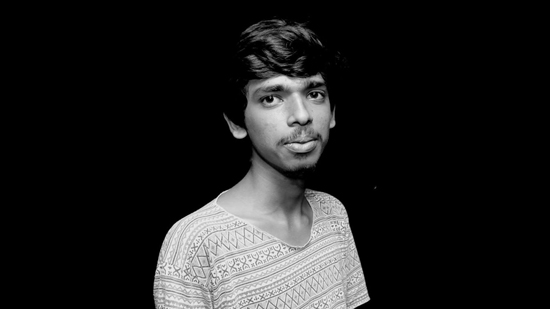 “My music is voiceless. It’s like art without any visuals. But it has a story. Both yours and mine. If I can communicate with people through music, then they’ll be able to comprehend my emotions with every altering sound. If they looked within themselves, perhaps they’d understand my story,” says Dinelka.

Born to a middle-class family in Matara, his earliest influence in art and classical music came from his mother, a traditional dancer. However, it was his philosophical quest of discovering his own individuality that led him to exploring his artistic expression with sincerity and grit. He was 16 when he first started fiddling with beats and kick patterns. His deft control of rhythm and tonal complexities gradually enabled him to fundamentally breakdown the framework of his own musicality.

“When I was young, I was constantly trying to find my own sound. In a way, I still am. I started experimenting with sub bass and eventually my research moved towards frequencies. I was thoroughly amazed by the ability of a lone frequency to modify an entire melody. A slight alteration is all it took. So, after years of exploring a ‘hard’ experimental sound, I found my solace in ambient-minimal tones. While I lost focus in school and everything else, I kept telling myself that I needed to do this. I had hope. I learnt from my mistakes and moved on. It was only through music that life made sense to me,” says Dinelka who released his first experimental VA with Psychosomatic Records run by Marco Blazquize alongside artistes like Stekke, Max Anderson and Doneck.

His latest releases include ‘Double Side’ EP with Micromod Music and ‘UFO Coming’ EP via Jambutek Recordings. In their own words, the title track of the latter project is an amalgamation of eerie yet freewheeling tones that could serve as a precursor to an incoming space object.

Within his sounds lie a riotous bricolage of melodic elements seeking momentary unity in the simplicity of its structures. For instance, in ‘Silent Night (Original Mix)’ Dinelka manages to capture the steady undercurrent of a nocturnal gale. Through abrasive textures, the track coalesces a stream of floating rhythms with melodic lines that cascade into silence. Strangely distant yet familiar, the song rumbles in obscurity until it reaches a point of tranquil resonance.

On the other hand, ‘Double Side’, is a harmonic passage into the duality of human nature. The textural oddness of this composition serves as a chromatic bridge between elements that define our character. Embracing randomness in his chordal structures, the track is a compelling tale of eccentricity woven seamlessly into a larger narrative — one that encompasses Dinelka’s artistic journey.

“I am a dreamer. I have always been one. More than often, I would wonder why music made us happy or sad? It piqued my curiosity. Sometimes I don’t understand the language and yet I find myself dancing. I enjoy every sound in the universe. I cherish listening to them. I have always been the silent kind. Maybe that’s why I am a musician. I express my feelings through sound. It is who I am. At some point in my life, I felt lost. But I never gave up. I guess I eventually realised who I wished to be. I’ve always wanted to do something meaningful with my life. And, I know I am not alone on this journey”.