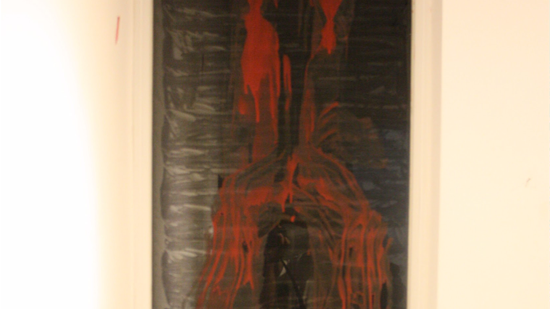 Performance art event Theertha Performance Platform (TPP) brought together various artists from different disciplines at their latest show, centred around the exploration of sound’s ability to transcend its own medium, the event was aptly titled and themed ‘Sound and Crossing(s)’.

Held at the Post Graduate Institute of Architecture in Colombo, Sri Lanka, the event aimed to look past the so-called “ontological anxiety” and “liminality” (explored in the concept note here) associated with borders and crossings – with beginnings and ends, while also making a valiant effort to embody the properties and philosophy of sound. 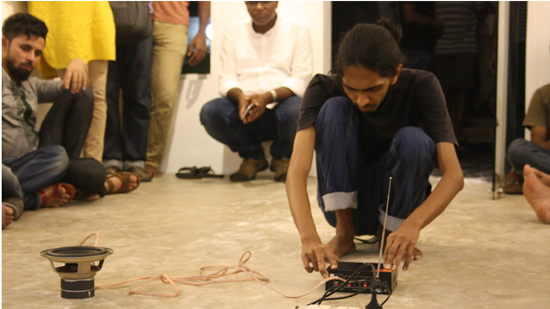 Experimental electronic artist Isuru Kumarasinghe, in his first performance of the night, randomly tuned into radio stations (similar to John Cage’s ‘Imaginary Landscapes’) while heaping sand on the speaker until it overflowed, creating unique patterns. The sand initially smothered the quality of the speakers sound but strangely the more it collected, the crisper the sound became. The patterns, the dampening of sound and the linearity formed through the randomness of the radio station highlighted the tangibility, its ability transcend its own medium and was exclusive to that space and time.

As twilight turned into night, installation artist Smitha Cariappa donned sunglasses, opened an umbrella and began her performance, completely out of the blue. Cariappa’s piece, maybe the most Dadaist one of the night, consisted of her attempting to kill mosquitoes, failing miserably and taking her frustration out on a water bottle. Smitha then simply sat on a nearby chair for the rest of the night. This whole charade gave the impression she was channelling the difficulty of everyday life, compounded by obstacles that we don’t necessarily have a say in. 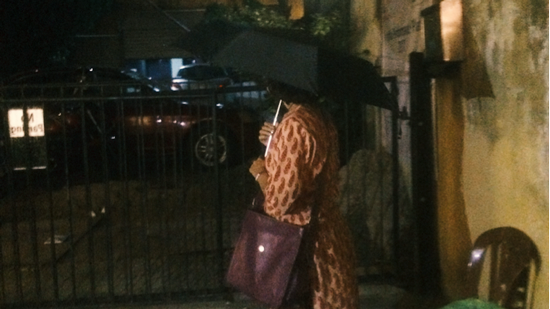 As if to contrast Carippa’s performance, Madhavi Gore began hers by baring her chest and flaunting her feminine fullness. She then proceeded to make delicate marks on her body. Gradually, the markings became violent and ended with a very Rorschach-esque self portrait. It was as if she was recalling events that her body had gone through by marking herself, like a tattoo. Episodes in her life that had changed her as a person and as an artist: the times she was told that she was a woman; the times she was silenced; the times she was threatened; the times she gave birth to something with her blood, sweat and tears; her injuries, impacts, and injustices. The shade of red that she used was like liquid rubies.

Chaya Kothalawala’s seemingly simple feat of sticking PVC tape – an everyday object used to fix things – on her body was quite profound; she was trying to radically fix her flaws. The prerequisites to be ‘fixed’ are recognition that one is deeply flawed and broken, and a thirst to better themselves. Kothalawala carefully covered parts of her body with the tape, over and over again. She also kept certain parts intact; certain flaws are beautiful when they are left and allowed to become scars. Chaya ‘fixed’ herself up so much that she was no longer the same person. Perhaps she realised that she was fixing herself because society was telling her that she was broken. Recognising this, she removed all the tape from her body and found herself, once again. When her performance was over, the fact that the artist didn’t wait to be acknowledged was of particular interest because more often than not, one’s biggest achievements, introspective or otherwise, go completely unappreciated. 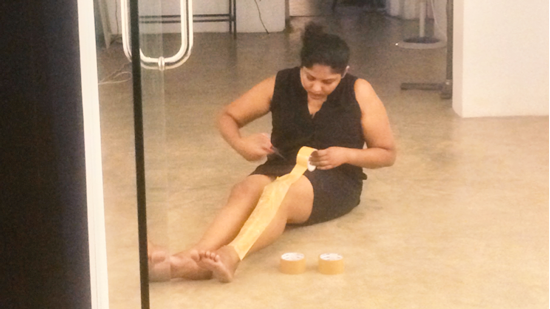 Brian Allen, who has been teaching and performing with the Musicmatters collective over the past few months, performed music accompanied by a series of videos that he had filmed. His show reminded me of old movies that were screened with a live orchestra. The combination of Allen’s music alongside visual footage that was both surreal and mundane was beautiful. The performance came to a close with sounds that droned and dragged on, reflecting the monotonicity and repetitiveness of life.

Despite artworks on the civil war in Sri Lanka tending to be dull and uninteresting, Lohan Gunaweera’s take on it was refreshing. He drew attention to the inanity of destruction by decimating a violin that was covered in gauze, almost as if a wounded soldier was being torn apart. Each broken piece was given to a member of the audience like a gift, similar to ‘medals’ that are given to soldiers for their ‘sacrifices’. The broken violin was then wrapped in more gauze, placed back in its case (which eerily resembled a coffin) and was carried out of sight. 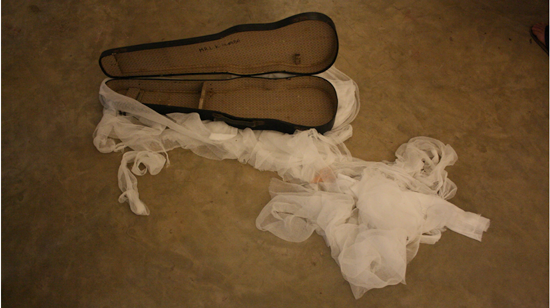 For those that question, in Asgar Hussein’s wise words, “is this art, or is this bullshit?” let me leave a response by experimental musician Edgard Varese, when he too was questioned if his work could be considered music:

“As the term “music” seems gradually to have shrunk to mean much less than it should, I prefer to use the expression “organised sound”, and avoid the monotonous question: “But is this music?” “Organised sound” seems better to take in the dual aspect of music as an art-science…”

words and images by Katusa Medusa