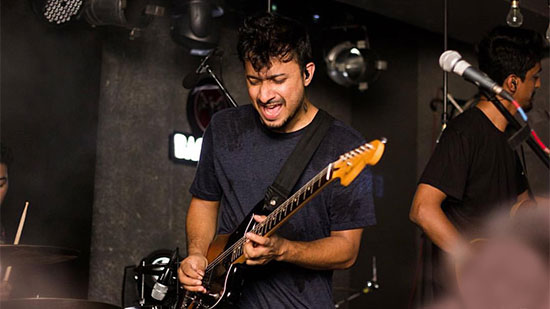 Uddipan Sarmah is the frontman of Aswekeepsearching, a post-rock outfit from Ahmedabad and one of the few acts from the city to have broken out from the scene there. The band released their second album ‘Khwaab’ in October last year to much acclaim and followed this with a 5 date tour around Russia. Sarmah is also one-half of the brains behind popular indie series 2Stroke Tour, where he organises national tours for multiple bands.

We caught up with Sarmah about life as a musician in Ahmedabad, the important role soft drinks play in sustaining the scene (Gujarat is a dry state), the best places to eat, where to shop, and the legendary Sunil Bhai.

Where do gigs happen in Ahmedabad?

Mostly in colleges. Either their annual festivals or any random gathering. We don’t get to see regular gigs happening in the city. There are a few cafes who do have live music but these are not well promoted and are generally singer-songwriter gigs.

What do people drink while watching live music?

Soft drinks. Or coffee maybe. OK fine, we can expect Red Bull at least. Happy me!

Do you prefer playing open-air gigs or pubs?

Open air. Because my band is a sound-driven band and we like to be as open as possible. Pubs are not bad at all. I like to see everyone in the crowd sweat.

What is the most painful thing about touring in India?

Travel. We don’t have good roads and they are not-well connected to every city. Not all cities have venues, and the ones that do are not close to each other. So we are forced to take flights, where we end up losing money.

What are some of the challenges that bands and artists from Ahmedabad tend to face, as opposed to artists from, say, Mumbai or Delhi?

No venue = no scene. No alcohol = no business = no new market to explore = life fucked.

Who is your biggest influence as a musician?

Anders Friden from In Flames. He changed my life and way I look at music. And I do like Bappi Lahiri. He is the golden Pop King, just like the King Kong.

What kind of music do crowds in Ahmedabad generally prefer?

Maybe [music like] ‘Gangnam Style’. Also Arijit Singh; even if he acts on stage, people here still like him.

Where can we get the best food in the city if we only have Rs. 500 in our pocket?

What is the best place to shop in Ahmedabad?

Is there an area that sells local musical instruments?

Yes. Sharma Music is the oldest. Heaven Music sells them too and is also the largest backline provider in West India. Sunil Bhai is killing it. Best businessman around.

Are there enough avenues and facilities in the city to sustain an independent music scene?

If any indie musician is reading this, they can approach Bluetree Studios! [Run by Sarmah]

I like bun muska and chai. You get it near IIM Ahmedabad. Oh dude, the aloo paratha there is epic too.

How can music lovers discover new artists in the city?