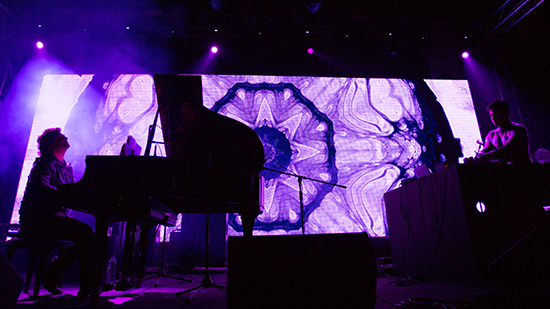 Until recently, when Vasudeva had a conversation with Munbir Chawla, one of the co-founders at Magnetic Fields. They spoke about doing a classically inspired recital at the annual festival, but in an appropriate context. “A classical recital can be quite esoteric sometimes,” says Malaker. “It would mandate it being presented in a context that is consumable by the people at the festival.” Chawla suggested Vasudeva and Malaker work something out together, which incidentally came as perfect timing for Malaker. He’d just finished working on his mammoth, three-hour-long live set, called ‘Paradise Lost’ (a nod to John Milton’s epic), so he had momentum going for him. The two began work on the commission for the festival. And so Natural Selection came into being, making their debut at the recently concluded sixth edition of the festival.

It’s a 55-minute set (as of now). Both artists have, over the years, developed a clear voice and aesthetic — Vasudeva introduces elements of theatre and comedy into his interactive performances, while Malaker, with BLOT!, has long been functioning in a space of conceptual performance art expanding beyond merely the aural — so it all came together neatly. “There’s enough in there to accommodate all these ideals in the same domain. Also, we’re not 17- or 19-year-olds with our hormones going wild: Merko aise karna hai, merko waise karna hai!” It’s what informs the name of the project as well. It has nothing to do with Darwin’s theory; instead, it’s pretty much a literal description of their process, an acknowledgement of the dynamic the two shared. “Whatever comes naturally, we select,” he explains. Plus there’s the fact that a lot of the music is in natural scales, using natural minors. 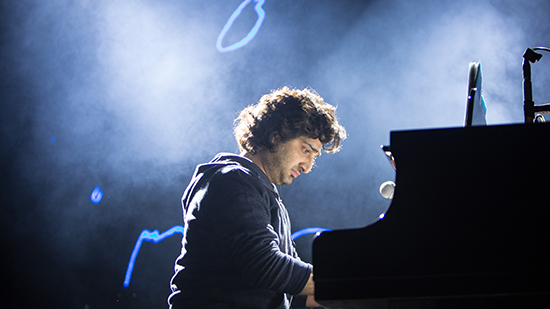 Moving on to the mechanics of the music and the performance, Natural Selection sees both of them sticking to their strengths and complementing each other’s strong suits. They’ve deliberately tried to keep the basics simple, avoiding the pitfalls of strained ‘fusion’ that so often turns into a pissing contest. It’s not a jam, so there’s no jugalbandi in there, where the two take turns to show off their respective skillsets. Instead, they’ve tried to maintain a sort of fidelity to the songs. “We’ve both been doing this for a while, so we’re fairly ‘mature’ in that sense, for lack of a better word. We were both comfortable with telling each other what we wanted to do,” says Malaker. While Vasudeva is handling piano duties, Malaker has produced the tracks and written the basic structures and arrangements, with the melodies and chords written on top of them on the piano. It’s a mix of reinterpreted songs — pieces by composers such as Philip Glass and Erik Satie, with arrangements tweaked to fit the setting — as well as original pieces written from scratch, but which reside in the ‘classical’ arena thanks to the natural minor scales used.

There’s a focus on rhythm and repetition, on recurring motifs where the right hand on the piano plays the same melody, while the left hand changes chords to create a new, fleeting colour to each passing refrain. “Rhythm and repetition,” says Malaker, “has now become the backbone of most contemporary music, whether it’s electronica or pop or even Bollywood — you play on grooves that last for 16 or 24 or whatever numbers of bars. It’s also easier to consume music in that format. When the chords keep changing over the same melody, it changes the colour every four bars. It’s really gratifying.”

Then there’s the small matter of the visual element. BLOT!, in its previous avatar with Avinash Kumar handling the visual aesthetic, would aim for rich audio-visual experimental performances. But it’s just Malaker now, and he’s decided to forgo that aspect of the performance. “I made a conscious decision not to do visuals, as a mark of respect to [Kumar]. The visual element in BLOT! was never intended to be a mere augmentation of the music, but rather a push-pull dynamic where both share equal space. It stopped being as rewarding — as Malaker says, playing graphics for drunk kids in a bar who can’t tell their heads from their asses is unlikely to offer much creative satisfaction. So for Natural Selection, they’ve charted out a broad light design, but they’re largely choosing to stick to the minimal spirit of the project.  “A grand piano on the stage, and someone who plays it with some degree of flair, can be quite captivating. It’s captivating to watch, whether you see it in a Tom & Jerry sense, or a virtuoso playing. It’s really a fluid visual, to just see [Vasudeva] on the grand piano.” 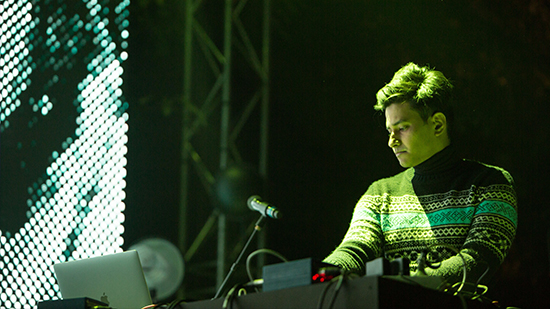 Natural Selection may have come into existence thanks to Magnetic Fields, but Malaker is certain it’s not going to be a one-off thing. We’ve worked too hard on it! We haven’t made the performance for just one festival; it’s going to be a revolving thing.” They plan to continue playing it on tour, while there’s also the possibility of a proper release, though it’s unlikely to be straightforward — Malaker doesn’t reveal much, except that he has a conceptual format in mind for it.

Malaker has been frighteningly productive of late, and he’s been consistently evolving and trying out different sonic avenues in his work through the years. Despite his time in the industry, and the success BLOT! has achieved, there’s been no lingering sense of ‘coasting’. He’s constantly trying out new things. “You know, I think, very simply, it’s imposter syndrome. All us artists sort of share it, and at some level, we are always cognizant of it, or at least I am. It’s also about doing new things; I don’t think I’m there in my life where I’ve done enough to just coast on, and I get bored with things quickly. Maybe it’s my personality, but I’m always trying to perfect new things in art, and I’m really not interested in this purported minor stardom that’s everywhere in independent music.”

Instead of sticking to pure techno, and the slight connotations of snobbery or elitism that accompany it, Malaker has repeatedly dabbled in music that doesn’t limit itself only to beats. “I’ve tried to be as agnostic of the hyper-segments of classifications in this. Beats do play a vital of course, but I’ve never been too averse to play with vocals or melody.” Accusations of cheesiness, or something sounding ‘girly’, have always been irrelevant to him, and he’s addressed the necessity of feminine energy in music in the past as well. For now, he has his hands full with Natural Selection and Paradise Lost and releases he planned for the new year, and he’s exhausted. “There’s no English word for it. Phat gayi hai.”