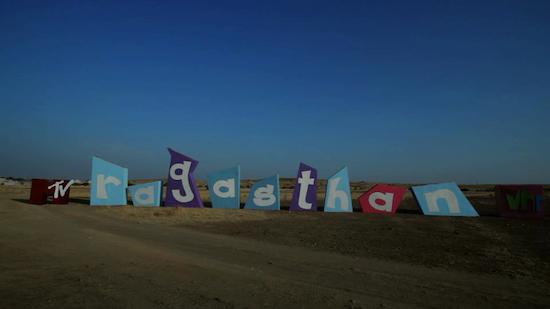 Valentine’s Day and a full-moon in the desert may be just some of the factors adding to the thrill and exhilaration of Ragasthan.
Last year’s edition was well-received and we ourselves heard fans raving about the décor, stages and of course, the music.

The festival, now in its second edition has carved a niche for itself by pure differentiation – it not only has music but also adventure sports, collaborations, environment-friendly initiatives and above everything, a raw feel that isn’t offered in quite this way.

The live music market in India is on the verge of saturation with old/new promoters setting up ‘experiences’ and vying for international headliners. Ragasthan however, might have already garnered its set of loyalists without following the traditional formula.

Despite being muddled in controversy on social media platforms by artists encouraging people to boycott the festival, its founder Supriya Sobti says that they are well-prepared for the soiree due to take place in the deserts of Jaisalmer from February 13 to 16.

Tells us how things are shaping up right now…

Well, the word is spreading and what’s great is that we are discovering new artists. There are only a handful of big names and considering that there are numerous festivals, we are careful to not have many repetitions either. We want new sounds to be heard.

What will be different about the programming this year?

The festival this year is going to be in the Khuri Dunes which will be new on the touring map. There aren’t going to be overlaps with the schedule being such that specific stages will be playing one after the other. The stages will be designed in a manner that you will get a brilliant view of the performers. The Birakha (singer-songwriter) stage will have a laidback feel while the Ammara (progressive techno trance) stage, located in a dune pocket will have an underground setting. The Morio (pop-rock-world-folk) stage, which is our main stage will have the sunset’s view.

You had mentioned that you will have drive-in camping this year… is that on? And what other innovations can we expect?

Yes the option of drive-in camping is there – it will add an element of madness to the festival and bring in a streak of adventure! We have paramotoring this year which has a motor, propeller and harness attached to a paraglider wing. It will give one a bird’s eye view of the festival in a flight of three to five minutes. We also have hot air balloon rides, paintball, zorbing and RC cars.

It’s hard to ignore comments by the artists that they haven’t been paid for last year and this year, those performing aren’t being paid…

We have paid all our artists. All those who have been associated with us last year are a testimony to the same. We put our best foot forward to give them a great experience as they are valuable to us. They all believe in us and our ideology. We value art and hence, we need the artists to support us. We share a healthy, mutual relationship with every one of the artists.

Our aim is to create a holistic experience that will add to the social capital. And that isn’t possible without the artist and the attendees who are the biggest stakeholders in this endeavour. We hence need people to come forth and pay for the experience that we so passionately strive to create. It is time we quit complaining and actually do something that can be sustained with co-operation.

Which sponsors are involved this year? Also, how are you working in tandem with the government and the local community?

The Rajasthan Board of Tourism is supporting us. Hence, we are working with the local community in Khuri who want us to push their culture and art. We will be involving the locals in the preparations; providing them a source of livelihood. We have an initiative of ‘no plastic’ and are encouraging everyone to carry their own flask to drink tea, coffee, water and even alcohol! Local talent performing will include Mame Khan, Ghazi Khan, Taleb Khan and their respective troupes.

We have MTV India as the channel partner along with Bajaao looking after the sound rental duties. Incredible India! is also supporting us.

What kind of collaborations can we look forward to?

There will be numerous onsite collaborations taking place. Last year we saw Kolkata-based artist Tritha collaborate with an African musician who manages her today and is producing her album. The artist’s village will have a lot of things happening.

Lastly, tell us one thing that you are excited about that we probably don’t know…

This year we have a French pianist who has been inspired by Indian works who is being brought down by the French Embassy. We can expect a lot of surprises!

One response to “Back To The Dunes: Ragasthan 2014”