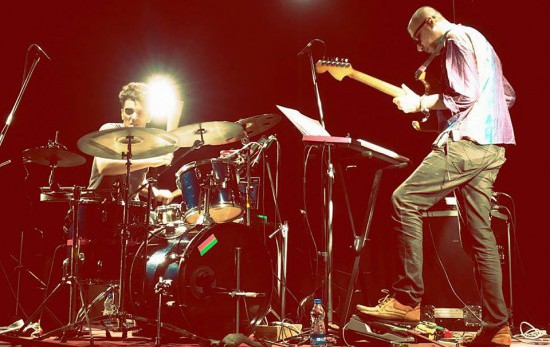 Last month, The Goethe Institut hosted a very special gig at the Max Mueller Bhavan Auditorium in Kolkata. The gig was an ambitious vision realized by Amyt Datta and Jivraj Singh, both leading lights in the Kolkata music scene. Ambiance de Danse is an experimental music project conceived by Datta which was then expanded with the help of Singh but its intensity and unconventional approach made it seem quite unsuitable for a live performance; the gig at Max Muller Bhavan in late April changed all that.

The evolution of Amyt Datta and Jivraj Singh is certainly not something that can be clubbed together and written about briefly. The two have had vastly different careers in music but are masters of their own instruments with Datta’s almost tumultuous guitar style careening into Singh’s adaptive yet expressive percussion approach. Still, the two of them have much in common and their synergy can be seen in the various bands that they’ve played in together over the years as such as Skinny Alley and PINK NOISE. It could be well worth your time to actually discover how these two men have become such figureheads in their areas of music but that’s for another article – here we’ll talk about how their experimental music project is taking physical shape.

Experimental music is extremely challenging to conceive in the first place, simply because you run the risk of creating something hackneyed and sub-par in the name of experimentation. Last year, when Amyt Datta launched Ambiance De Danse, he really was breaking new grounds in terms of Indian independent music. His previous project, Moniker, didn’t result in the planned album but instead dug deeper and emerged with a new project instead. Speaking to NH7.in back in 2013, Datta explained how “This project was something I actually recorded music for about five years ago. The thought was basically that I wanted to explore whatever music I have learnt, be it jazz or Indian music – whatever catches my fancy. It has influenced my playing a lot even in the sense that sometimes when I am playing, western music, it will turn into something that sounds like Indian music. I don’t even play that sort of music, so it’s a combination of all these ideas.” 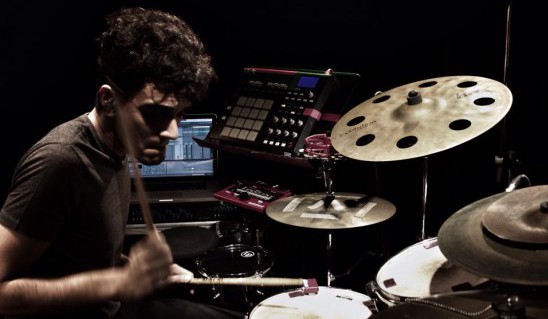 Naturally, he turned to his close associate Jivraj Singh for further collaboration. Singh was brought into the project to add drums but also the electronic elements which were only part of the live component. The process was to take Datta’s compositions and couple this with the duo’s live improvisation as well as Singh’s live electronics to make the entire performance a dynamic experience. They finished work on the album in 2013 but it took almost a year for them to truly come up with a live show that they felt would do justice to the project.

Jivraj Singh was touring Europe most of this month and he even linked up with multi-instrumentalist and composer TL Mazumdar. I reached him via email and he told me more about the show at Max Mueller Bhavan and future plans with Ambiance De Danse.

The project takes its name from Amyt’s album released last summer. All music has some amount of experimentation anyway. This is simply the music that we are creating in the middle ground between our fairly disparate personalities and aesthetics.

Ambiance De Danse seems like a really complex project on the face of it? How was it conceived? How did you guys arrive at a consensus as to what you wanted the music to become?

Ambiance De Danse wasn’t conceived to be complex per se. It’s just that the clash of our influences resulted in something which may appear to be dense or unusual. Amyt composes, I design, and the music becomes itself, often without our intervention. The music is very much a work in progress. 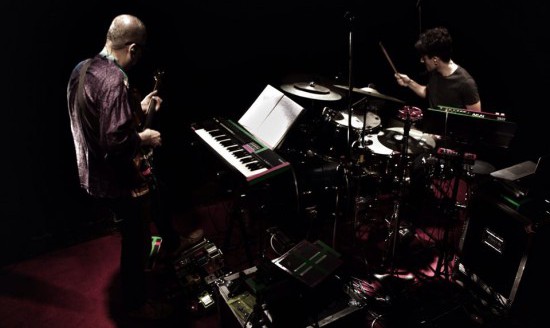 Is it right to assume that the two shows from last month are in fact an attempt at making Ambiance De Danse a live show?

Yes – the music was always intended to be played live – we were just waiting till we had enough material for a full length show.

What challenged you the most when coming up with this live concept?

How to create an engaging performance template for the music since we are essentially a duo trying to play music that has a lot of layers and production.

Tell me about the performance itself. You mention “visual elements, stage design and a great saxophonist” in an interview with Wild City. What happened at the show?

The music is designed to be very modular; we like to add or subtract people and technology to try to give each show a unique personality, and also just to see what will work best, since the show is still at a nascent stage. The Goethe Institut show was very stark and minimal. The second show at Princeton Club had more going but was still just one iteration in a process that we hope will result in a show that is more a ‘world’ than merely a ‘gig’.

Will there be another album that follows up to Ambiance De Danse or are you looking to try something completely new when you guys hit the recording studio again?

We’re almost ready with the material for the second album. If all goes well, this one will involve one of the most innovative bass players in the world today.

Will there be future shows for Ambiance De Danse? Using the Max Mueller Bhavan gig as a barometer, do you think people are ready to experience this music in the flesh?

There is definitely more live performance in the works. We’re constantly thinking of new ways to present the music. I believe that people are always ready for new experiences.