It would be almost criminal to begin a post on Wazulu The Ill Dravidian without mentioning how extra dope his name is. It brings together the conventions of golden age hip-hop with an unexpected southy twist, and yet manages to sound as if it would have fit right in as part of a mid ‘80s New York crew. END_OF_DOCUMENT_TOKEN_TO_BE_REPLACED

Last night’s Sound Camp closing party at Pettah Interchange was to be not only an incredible party but also a radical milestone in the history of Colombo’s music, art and club culture.   Thank you for all the feedback!

Thank you to everyone who helped transform the underground car park of the historical Gaffour Building in Pettah into a sound dungeon reminiscent of  the  early club/ rave/ squatter era of Berlin, Detroit or Sheffield. With a faded, mystical charm of a byegone era (similar to in Calcutta or Havanna), the Gaffour Building  and Colombo’s nightlife was catapulted  into the future for just one night.

Today the Sound Camp participants are heading back to their respective homes in Afghanistan, Pakistan, Bangladesh, India and Germany.  Sad to get on the creaky, cable drawn ferry for the last time, the artists leave Ruskin Island armed with an arsenal of music and with memories of an inspirational time spent sharing, creating and having a hell of a lot of fun together. 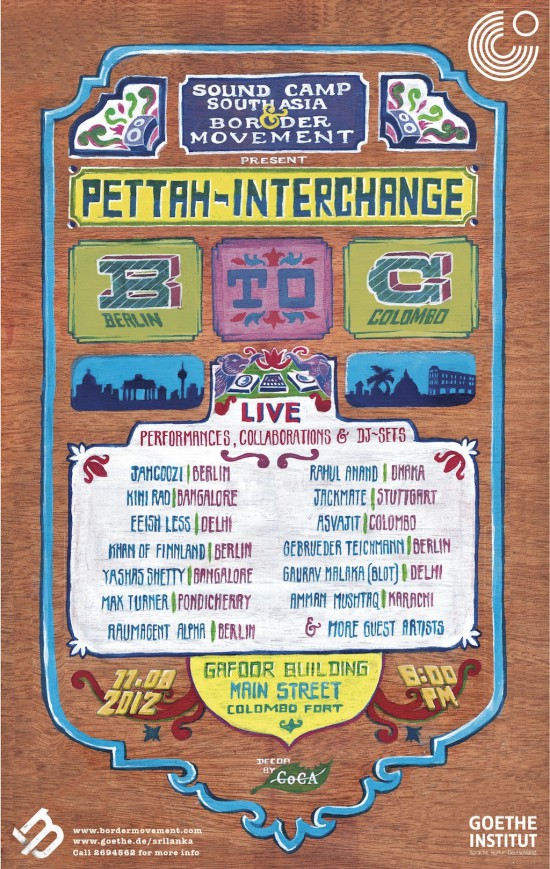 Diffused Beats from Munich and Delhi

diFfuSed beats is a duo comprising of Konrad Bayer (Munich) and Ish Shehrawat (Delhi) as they engage with sound with both philosophical and de-constructive aesthetics. Their works are synthesized out of sounds, noises and field recordings that were recorded in various locations around the world. END_OF_DOCUMENT_TOKEN_TO_BE_REPLACED

Apparat to tour India this month

If you’ve kept a close eye on the pulse of electronic music at any point over the last five years, it’s safe to say you’ll have encountered Sascha Ring a.k.a Apparat, the Berlin based musician who has been a restless force in contemporary electronic music for over a decade. In that time he’s released 4 critically acclaimed Apparat albums, alongside a techno masterpiece with long time collaborators Modeselektor as Moderat. END_OF_DOCUMENT_TOKEN_TO_BE_REPLACED