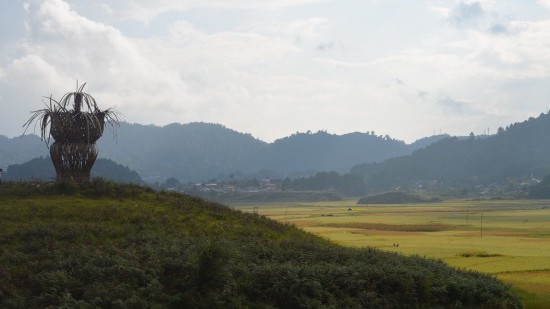 The music wasn’t all that was right with Ziro Festival. The wide-open landscape of the Ziro Valley, situated at about 2,300 metres is a destination worth exploring even without the festival. Lush, pond filled open expanses of paddy and millet are dotted with hills covered in pine and bamboo. In villages near the festival site, one finds raised wood and bamboo houses interspersed with the occasional pakka construction. I’m told that the local food, which features a panoply of meats, is delightful. I’m vegetarian.

The festival site was on a small hill surrounded by paddy fields. A day stage and a night stage were spaced out far enough to prevent bleed through during soundchecks.

A big win for the Ziro team was their sound and lighting, which far exceeded expectations. With limited equipment, the exceptionally talented festival staff turned out a light show that outdid many Weekender stages, and managed to wrangle some very impressive sound out of a mid sized JBL rig. Whatever it takes, retain these light and visuals people next year; they really pushed things to the next level.

Oh and the booze: delicious, cheap, and highly intoxicating local rice and millet brews. Local households near the festival ramped up to round the clock production in order to serve the thirsty festival goers. 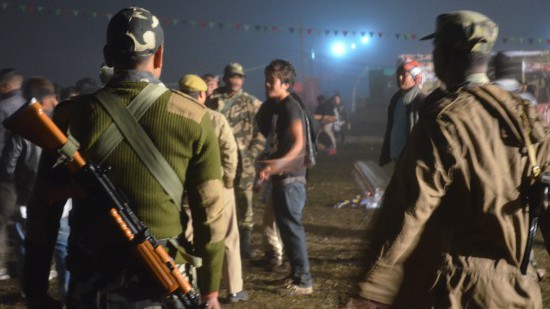 When you’re in a state that has a population of Meerut, when your view is of wide open expanses, it’s a bit jarring to sleep in a campsite that might, at that very moment, have the highest population density of any location in the entire state. I would have happily tolerated a walk to the festival site in exchange for a less cramped experience and freedom from 7am soundchecks.

Another major detraction was the festival booking process. Organizers were quick to point out to me that, unlike in past years, a combo package with camping accommodation, transport from Guwahati, and passes was available through their partner, Shoes On Loose. But several attendees told me they bought discounted early bird passes through the festival site before they were aware of that option. And without an online payment gateway at Shoes On Loose, the process was cumbersome.

Then there’s the issue of permits. It took me five attempts to get the festival staff to facilitate my permit processes, despite early assurances of help from them. A festival in a restricted area demands extra vigilance. 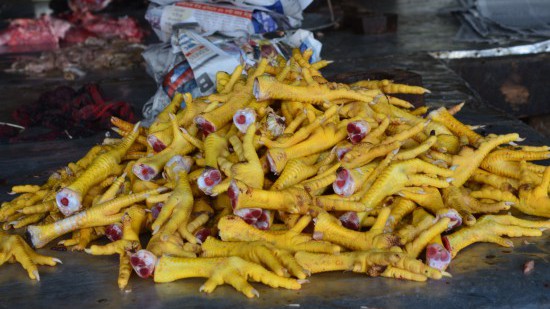 Then there was the debacle that was Shoes On Loose. They were uncooperative and dismissive from my first interaction. They provided little to me – no tent (I chose to bring my own), no drinking water, a poorly dug pit toilet, irregular water access, insufficient bathing capacity, and constantly vanishing support staff – while promising much more and charging me 750 rupees a night. I could have all that for free. And they effectively tossed me, wet and hungry, out of the campsite with 15 minutes notice, near midnight, when they decided I couldn’t ride on the morning van on which they had earlier confirmed my seat. When I pointed out the confirmation, I was told “you didn’t get written confirmation. You can’t prove anything.” As if I was going to take them to court.

But SOL didn’t provide the only ugly moments. On the drive to Ziro, when our van stopped for food, I found our drivers huddled in a circle sharing a bottle of whiskey to keep them warm through the 14 hour overnight drive. If there’s one thing I like less than an exhausted driver, it’s a tipsy exhausted driver. This is absolutely unacceptable, but met with no comment when I brought it up with a festival organizer. 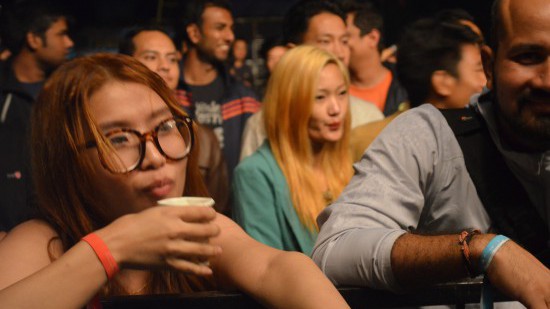 With the exception of permit issues, every negative experience I had at Ziro Festival was because of subcontractors to whom the festival had outsourced transport and accommodation. One of the festival organizers, lamented that their team is simply too small to handle all these details themselves. And though I’m sympathetic, if the festival is to grow, the team must as well.

Right now, many Northeasterners and a handful of mainland adventurers make it to Ziro. As long as subcontractors are shoddy and ticketing is a fragmented pain, it’s going to be difficult to push beyond that core audience. And more vertical integration also offers revenue opportunities. If the festival rented out all of the accommodation in the area, they could then put it on offer at a slight markup, through a single payment gateway on their site, marketed to high flying metro travellers with big budgets. Some of the money earned this way could then subsidise camping accommodation, making it easier to sell festival passes, food, and beverage.

Ultimately, it’s a question of accountability. When I got thrown out of my campsite in the middle of the night, there was no festival staff on hand. When I needed water or a car, or whatever, there was no festival staff around to ask. Two camping vendors, multiple transport vendors, and little coordination from the festival made for confusion and chaos in the camps, and indeed was the reason for my late night eviction; apparently, I was booked through another transport vendor. But to customers, a van is a van.

The organizers clearly worked hard and did well. But when they washed their hands of some elements of the user experience, things fell apart.

**Since writing this article, the organizers have been very proactive in reaching out to us to better understand our problems with Shoes On Loose so they can be addressed in future years. They’ve looked into our concerns in great detail, which cements our faith in their care and skill. We look forward to another amazing festival next year.**

written and photographed by Kerry Harwin