To give things some context: we are hard men to please. Although that’s not the best trait to live by or aspire to, wasting your youth away in dingy basements had its perks: A militant, no-frills outlook on music meant that you learnt to live by the most basic of essentials: a dark space, big stacks, an (anti) DJ you can barely make out in the mist and music stripped down to its most base elements.

A rather purist (though not necessarily best, we stress) vision of techno meant that the social and visual aspects of the music was almost non-existent. At this point of our listening careers, it was almost impossible to take music presented as something more, seriously. We had largely outgrown parties, subcultures, special venues, strobe lights, scenesters and vague notions of art – the very things that may’ve played a part in drawing us to this music in the first place. The dust had long settled, and for better or for worse, only the music remained.

Within this (personal) context, Marketplace still felt like a spectacle of somewhat epic proportions. And although the music played was not supreme throughout and the night’s momentum kept rising and falling until it got to Skinnerbox‘s set, the underlying feeling in the air was that something major was goin’ down: The ambience was thick and feverish, and the venue, situated in the grubby heart of Pettah, was a warm and inviting beast. Entering it felt like penetrating a seedy old subway in Paris, yet the sight of the familiar shop fronts flanking the spaces made you feel at home.

And by the time we had to regrettably cut short our stay (due to a life-threatening encounter elsewhere, hence the incomplete review on the music front) the night was still young… and heavin’. Whilst the somewhat discriminating door-policy of the policemen at the gate tried hard to embrace or highlight a certain social divide, the crowd was as eclectic as the triple rainbow, from trust-fund babies to streewise kids to natty-dreadlocks. And although it was uncertain as to how many people had come for the music, the nightly verve seemed strong enough to convince them to stay for nothing but.

Last year we carried a high bar and high hopes for the prospects of the country’s dance music underground. It has been a mixed bag so far: New output from the emerging artists featured in Border Movement’s 8-part First Wave had slowed down to a trickle, with seemingly only a handful of releases on the horizon. The exponential growth predicted had crawled back to become less than linear. On the bright side, the Music Matters collective was making concerted waves. Elsewhere, we had gone to parties bold enough to drop both Levon Vincent and African dub. Not quite pivotal moments, but engaging times nevertheless. 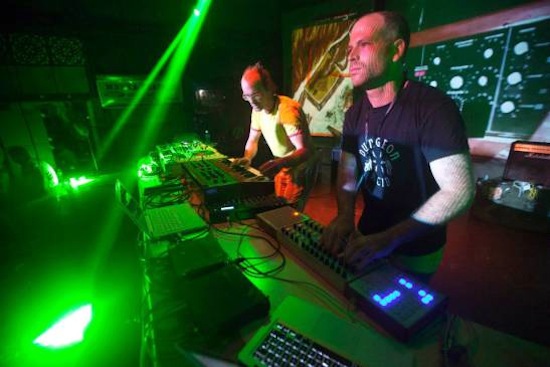 In an attempt to respark the lull and reclaim bit of last year’s magic, Border Movement returned to Colombo with a colourful line-up that included the likes of Asvajit, Mars Madness and Kinesthetics 0800. When we reached Pettah at midnight, Sandunes had just started what felt like a live set. A more-than-graceful sight on the decks (an unassuming bollywood dame?), her music was a curious mix of brains and brawn. Then came Gaurav of BLOT!, who started things off with a thundering Ben-Klockish thump that raised hopes for a heady set. But the intensity waned with time, the music alternating between peak-time to drudgy material.

Yet by the time Skinnerbox came on, the crowd had already been whipped into a frenzy. At a time when Ableton-noodling qualifies as playing “live”, it was rare for a subcontinental crowd to witness two men with a minimoog. Skinnerbox didn’t disappoint, building slowly into a jazzy n rollicking set which almost had a swinging, Balearic quality to it. The somewhat glossy sheen in their music resembles more Minilogue than Bookworms, but they clearly knew how to shape a set, riding the night for an impressive 2 hours. The following morning their facebook page simply read “THANK YOU COLOMBO FOR TOUCHING OUR SOUL.”

As for the giant visuals which shaped and dominated the atmosphere of the event, we felt they were a detracting part of the night, esp when the venue itself was a marvel on its own (Note: Although we appreciate the Torn Hawk school of thought, we still like his music better). Perhaps a visual dimension can work with certain artists who specialize in both fields, but to successfully mimic, reflect or heighten the intent of the music through visuals and offer something more in the process seems difficult, and could act to confound or confuse the experience than enhance. That said, opportunity offered here to budding Sri Lankan VJs to experiment with the format was commendable. 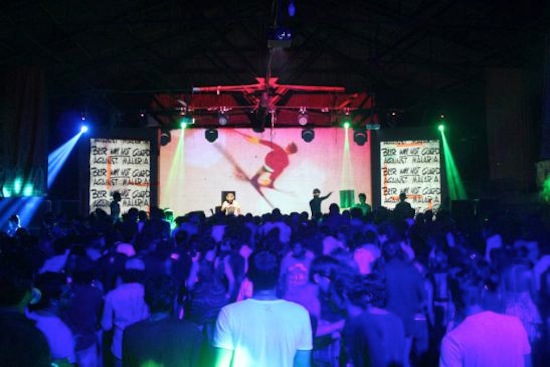 Let’s come back to our original point: techno idealism aside, there seem to be practical constraints at work here. Talking to couple of the idea-men behind the game-changing parties of the past, Sri Lanka seems to lack the demographics to attract crowds for low-key gigs that strictly champion music. That is, unless they are marketed as something more, or hustled hard through the right social media channels as a combination of good music, über-art and free spirits, or held in Unawatuna (a popular beach town) so that girls would attend (but with no techno played so that said girls would not disperse).

Perhaps these men too are stuck with the chicken-and-egg: without the crowds, the music is a lost cause. So for now, the best that seem possible is to try strike that uneasy balance between authenticity and practicality — and Border Movement seem to have come the closest so far. Yet you cannot help but feel their major events are too far apart in the calendar to make a prolonged impact. These are hardly disparaging words (but rather, hopeful ones), as Tuned Mass recognizes the bona fide impact Goethe Institute and BM have so far had on the scene. Moreover, there have been answers, too.

So in closing, here’s an attempt to reshape and revamp the original metaphor (into something ridiculous): Although no longer stuck inside the dreaded tech-house iceberg, Sri Lanka’s electronic music eco-system is still young, only seeping out through the cracks ever-so-slowly. Admittedly, it’s still a trek to the promise land, that evergreen otherside of the mountains where music reigns above all else.

But as the old saying goes, there are no cable cars to success. Time then, to get to werk.

Read this review on Ceylon Sunday