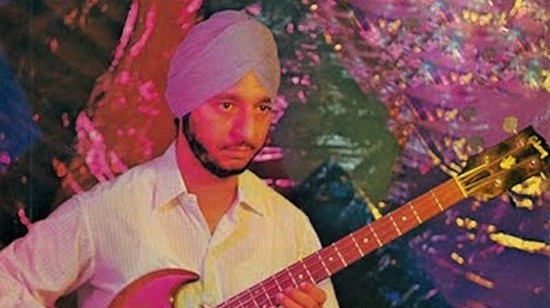 The album ‘Synthesizing : Ten Ragas and a Disco Beat’ originally came out in 1982 but went largely unnoticed.  It was re-released in 2010 to critical acclaim and is considered by many to be the first Acid House album that was ever made.  Multi -instrumentalist Charanjit who had been producing Bollywood film music in the 60s and 70s took a trip to Singapore in the early 80s in order to buy the state of the art Roland sound machines TB-808 (1981), TB-303 (1982) and Jupiter-8 (1981).

When he got home he used his newly acquired drum machine and synthesizers to see what would happen when bringing Indian classical music motifs together with the programmed beats of the disco music of the time. EMI India released the album but it was simply too early or just too off the radar. The result was so modern that it  almost seemed like a hoax when re-released in 2010. Thus Charanjit Singh’s belated recognition as a pioneer in a genre was only given the name Acid House a number of years after he had taken his steps in that musical direction.

The Polymorphism 6 line-up also features a lives et by Guy Called Gerald (credited for making one of the first UK Acid House tracks in Manchester in 1988) and a DJ set by Mobiletti Giradischi (who is in fact CTM program director Remco Schuurbiers).

A long night of psychedelic analogue debauchery lies ahead and a long-awaited German debut for Charanjit Singh, the accidental hero of Acid House.  Especially in a city like Berlin who’s musical identity and club culture has been so greatly shaped by Rave, Techno and House, such an event seems very momentous and Berghain is the perfect place to unravel the mystery behind the Indian who has played the most significant role in the history of dance music.