While the Sound Lab in Mumbai technically kicked off on Saturday February 7 and stayed quite low key through most of the weekend, it was the following week that really saw the project truly come into fruition. Until February 13, visitors of the Kala Ghoda Arts Festival, an annual multi-cultural offering in the heart of South Mumbai got to witness an experimental, unrehearsed workshop on electronic music production akin to the inner workings of a studio. 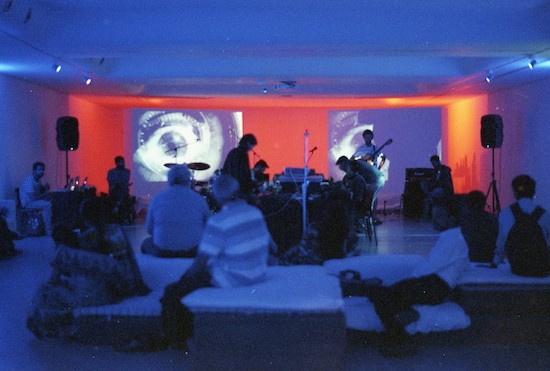 It would be fair to say that more often than not, a lot of musicians or artists, may present some skepticism in collaborating given unchartered territories. That they warm up to the idea really quick wouldn’t be an unfair statement to make either, in light of what we saw at the recently concluded Sound Lab. For instance, Akshay Rajpurohit (Aqua Dominatrix) says he “wasn’t aware of the concept of a Sound Lab in its entirety, until he had a word with the organisers,” upon being picked, and eventually seeing the space in front of his eyes. A 20 feet-long table placed in the middle of a gallery, miles of cables of all kinds, and equipment that is unique to each artist, which was both analog and digital, and seven musicians each working towards a common goal of creating music, while being open to any sort of input is essentially what a Sound Lab hopes to achieve.

That underlying emotion of taking away a cherishable experience was a common denominator on most days of the Mumbai Sound Lab. This feeling presented itself in a great way every evening, from 6 to 8pm during an open jam between musicians that was open to the public for viewing, followed by a solo showcase, accompanied with visuals by Sourya Sen aka Oblique. But more on that in just a bit. 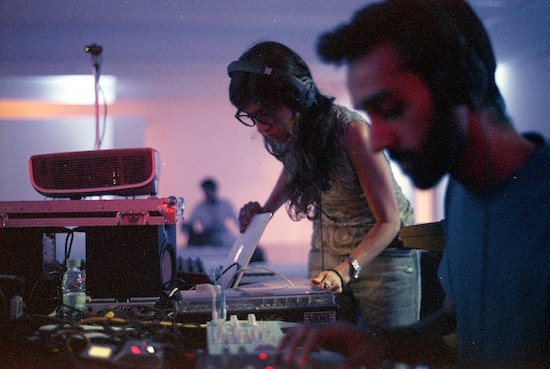 Sanaya Ardeshir, producer and self-proclaimed residency junkie is not a stranger to the Sound Lab having participated at the 2013 New Delhi edition previously. “I never look at a Sound Lab, or similar projects as a place where I can come and create music per se, because it is condensed but enables meeting a lot of different people; all who have different processes and methods, so there might not be an outcome but there’s always learnings,” she says of her experiences at-large. At the Mumbai edition however, Ardeshir collaborated with Rajpurohit to create a song, a process which has ignited the spark for future collaborations between the two Mumbai producers.

On the other hand, Toto Wolf, drummer for Perera Elsewhere, had a unique experience at the do. Being the only drummer, and less a producer helped him work with all of the participants, playing drum parts or adding particular sounds to each of the tracks being worked out, during the day – be it Perera’s collaboration with Nadkarni (SnowShoe), the Gerlitz and Senavirathne (Daffy Maestro) joint effort or the aforementioned collab between Ardeshir and Rajpurohit. While he did face initial bouts of uncertainty, Wolf eventually brought his ideas and inputs to the producers – often open to discussion, while also delivering the best when it was required from him. This transition was evident in the open jams in the evening, which got better over the week once the participants began to understand and play to each other’s skills, backed by a heady dose of intuition. 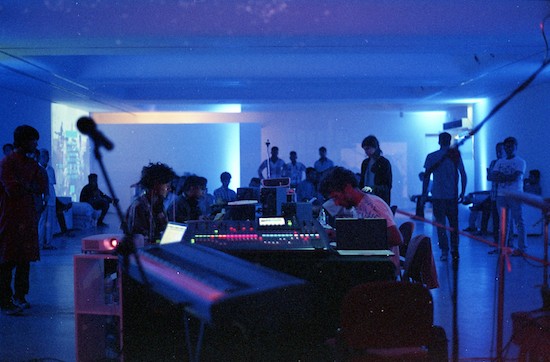 Sasha Perera, who has been a part of Sound Labs and similar projects in her long career in Berlin, warmed up real quick over the weekend, when most participating musicians were not available due to prior commitments. Perera Elsewhere even played a show at the Cross Maidan in Mumbai on the Sunday, as a part of the ongoings of the Kala Ghoda Arts Festival. Though it was well attended, they played a really short 15 minute set, plagued by spotty sound – not one for the history books. During the Sound Lab though, Perera brought her vocals, production chops and trumpet playing to the fore – wandering into a smaller back room to record vocal parts every now and then. Her collaborative outcome with Nadkarni remains to be one to look out for, and their seamless convergence was evident in the evening jams as well.

She says, “the evenings felt like a zoo, really, you know. With people walking around, staring at you, while you play music – but still being away from us, almost in a ‘don’t feed the animals sort of a way’, as if we had our animal suits on,” of the collaborative efforts in the evening. As one would expect with most things that grow organically, the evening jams saw some sort of an arc over the week, before winding down on the Friday night – into a final performance comprising of all the producers. These jams explored different soundscapes ranging from drum n’ bass, downtempo, breakbeat, synth-pop and sometimes indescribable waves of sound. 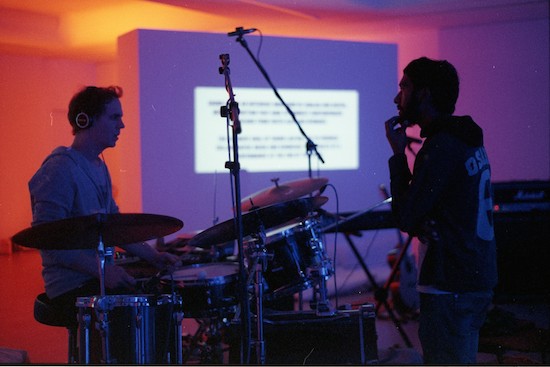 In fact, his set at the Sound Lab was the first time Rajpurohit took his electronic music avatar out to the public, otherwise being known for his guitar wizardry with popular hardcore outfit Scribe and post-metallers Pangea. It was heartening to see each of the producers stick around, and support the showcase of the others in the Sound Lab, often discussing the highs and lows from the jams and showcase once work for the day had been done. A casual sense of camaraderie had enveloped the musicians, sitting together in a single room, spending close to twelve hours together for a week straight. 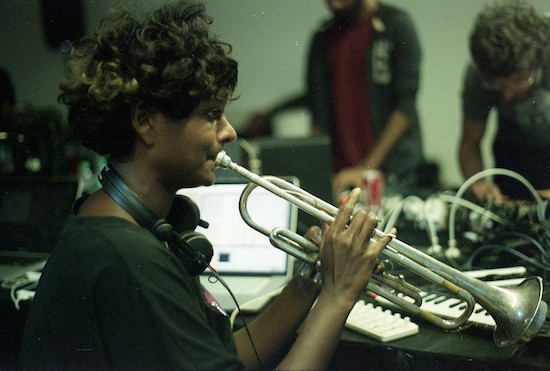 However, what seemed to be the biggest victory for the Sound Lab in Mumbai was the interaction with the general public at the Kala Ghoda Arts Festival. It must also be mentioned that the Mumbai edition of the Sound Lab was the first one wherein the jams, inner workings and space were open to the masses for viewing, for a limited period every evening. It makes an interesting case here, perhaps, because electronic music, though a booming industry in India right now, is still a niche with Bollywood music being the preferred tastemaker. However, with efforts such as these, in the midst of a large public offering have the scope of creating awareness amongst the visitors, if not convert, towards an alternative music industry and its nuances.

This impact, though microscopic in the larger picture, is necessary and was evident when visitors to the Gallery would stick around for a jam that seemed to be going somewhere, or perhaps struck a chord with them. Several visitors would stay back to talk to the producers; the more informed and enthusiastic ones asking about the gear and the process. Unassuming visitors were curious to see, and more importantly understand how the music was being created – and as mentioned before, in this lay the biggest positive of the Sound Lab in Mumbai. While this received more bouquets than brickbats, it was also amusing to notice confused expressions on the faces of the visitors, once in a while. It was also heartening to hear applause from the visitors, when portions of jams ended. 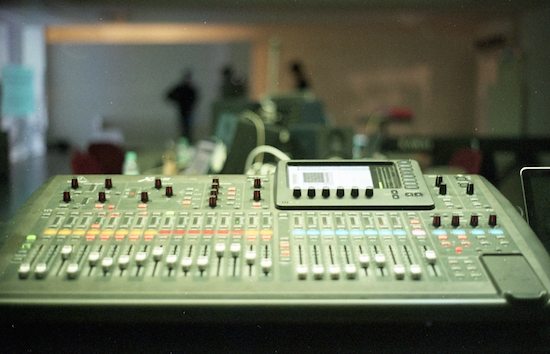 As a final takeaway, Orin Gerlitz, in a small chat with us said that while he’s been doing projects such as these for a long time now, each one is equally exciting. With his experience, and having worked in and with musicians from different continents, the humility never escapes, but one pointer he made, really stuck with us. He says, “being a senior musician is just a phrase, because in something like electronic music production, you always need to stay fresh, and those (ideas) could be coming from the younger guys as well.” Nadkarni, also a first-time participant at the do, mentions that “I’m not a very open person, but I had no time in connecting with people, because there’s a common goal, and I seemed to be connecting on a much deeper level with everyone involved.” In the process of bringing together people for the purpose of creating music, with the underlying thought of a cultural exchange, the Sound Lab really did well to achieve that. Perhaps a recurring effort of the same, will gain more popularity and achieve its goal of bringing forth alternative electronic music to the masses, while staying true to its cause of bridging cultures.

This edition of the Sound Lab made a strong enough case to host more of the same in different cities over time, culminating in a bigger outcome annually at the Kala Ghoda Arts Festival. If you happened to attend even a single day of the do, you know what we mean.