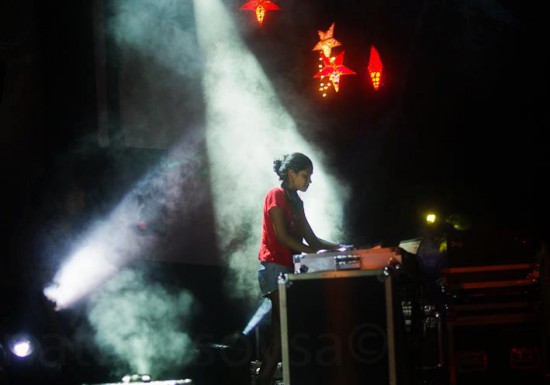 In our preview post about the event, the premise had been set, and the problem had been defined. And in search of another cave of bliss, coupled with hopefully good music this time, we embarked in to the unknown. The destination: an audiovisual nest at the heart of Colombo. In short, the bar was set high. Let’s cut to the chase:

‘Bang Bang’ was the sound we heard. Shots were fired.

Here we will try to see whether the shots were aimed at the right targets, whether there had been any stray shots, and if so, whether the collateral was worth it. 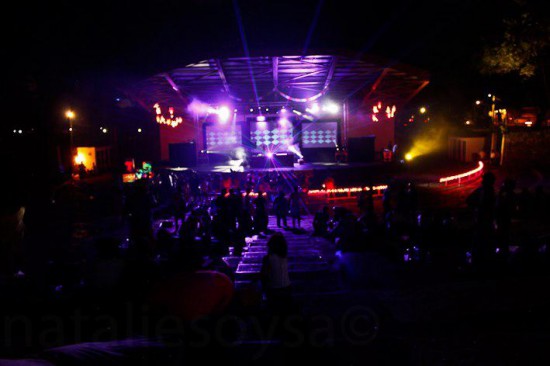 To begin with, the venue: It was big. Even though the Open Air Theater of Viharamahadevi Park presented the organizers with a unique space — a professionally-setup stage nestled in the abundance of green elves (literally, wink) — filling up the space to reasonable capacity required at least 2000-3000 people (which is virtually the crowd of a mini-festival, and in the subcontinent, a festival). It did not help that the whole venue was open for the event (and not selectively closed off to focus on the performer and the crowd), and thus the DJs were looking onwards at a picturesque but oval-shaped ocean of space, a slightly intimidating sight. More on that later.

The atmosphere for the event was relaxed but filled with colour all around, with people socializing in pre-defined groups. The proceedings began (for us, who got there late) with DJ Sunara, who played what sounded like a cross between glitched-out wobble, psychedelic-tantrech (we made that up) and UK bass, with the crowd slowly warming up to her skill on the decks. Next up was GeVe, playing a decidedly darker shade of tech-house which tested the sound system: Whilst the mids and the lows tended to get lost in the space around the oval, one could feel the punch of the speakers with wiser positioning (i.e. head on). Full marks there. 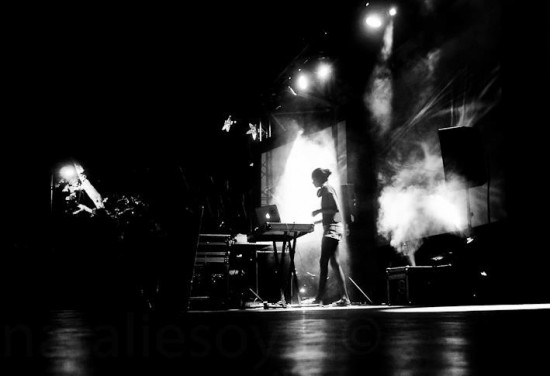 Then came Asvajit, slowly building and working his way up to a frenzy with a funked-up set that was peaking with bells, horns and whistles (the latter from the crowd). He was the clear highlight of the night, managing to gravitate several sections of the crowd sporadically scattered throughout the venue to a central core, part of which took the liberty to surround the DJ on stage by the time BLOT! took over. BLOT! started curiously enough, but were unable to bank on the momentum gained by Asvajit. For us, attempting to groove to techno whilst Navjot Singh Sidhu or a Doordarshan newsreader was eyeballing you from a big mega awesome screen, also put a slightly disconcerting spin on matters! Moving on, the final hour had DJ Shiyam taking over and finishing off with a focused and driving set. 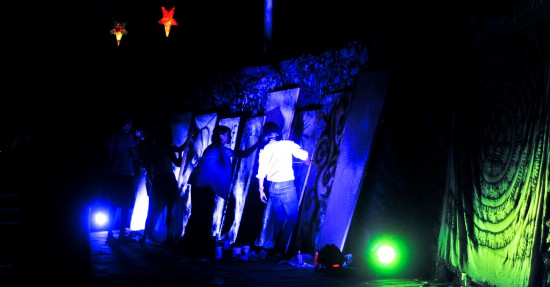          The chief barrier to this party (the large venue) was further highlighted (positively this time) at the after-party, which was held at Club ICE on Horton Place. Formally known as D’s, this small was club nested in an iconic castle-like building above a coffee-shop and another club which had little to do with the electronic music. ICE enforced no pretentions of a dress code on its patrons, unlike regular fare in Colombo which specify a strict rule of dress shoes and longs as a prerequisite for fun — a subtle middle-finger to the establishment there. The punters, who could only scatter around the Viharamahadevi before, packed ICE to the brim. Gaurav of BLOT! turned it up with a much darker and hypnotic set which harkened back to his Pettah Interchange performance. Shiyam then channeled his overflowing energy to another tight set, and the night was brought to a worthy end from 4-6 am by GeVe, who maintained the high adrenalin levels of an untiring crowd.

 So the final verdict? By the yardstick of substance over style, Oh.My.Goat! had fallen just a little short. Yet, it did so with soul and panache. With the event’s focus on the music heightened and the intimacy of the party reflected in a better (smaller) choice of venue (see: the after-party), the Bang Bang crew could have something more to offer, and turn their already dynamite series of parties in to one that is truly designed for the regulars, the heads as well as the outsiders. Admittedly, that is a near impossible balance to achieve. The shots fired that night, however, seemed to be originating from a heart which is very much in the right place.

One response to “Review: Oh My Goat!/ Colombo”