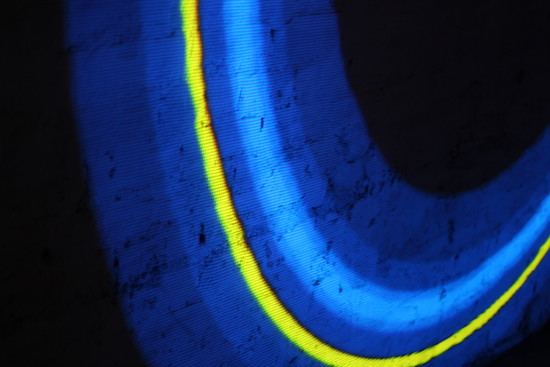 Bakheda, Saidullajab, Saket, New Delhi. A courtyard workshop meets studio space, hosting an audio visual concert called Disquiet. It’s cold outside, and inside the sound reflections of the venue are high and the stark white walls perfect for video projections. A fat, clean sound system ready to beam the audience into a new audio galaxy, with tea and snacks at the far corner. The line up is as substantial with an array of instruments as is the rarely curated combination, between Hemant Sreekumar, Lionel Dentan (Da Saz), Ashhar Farooqui a.k.a Toymob and Vinny Bhagal (Sin:drome – Shivnakaun).

The agenda is to explore and present disquiet, abstract, chaotic, white noise based, frequency manipulated passages of audio visual narratives. Each artist with his own arsenal of code, filter, oscillator, knobs, chaos generators and analog modular synthesizers. The concert sounded off at 7pm (not adhering to the nightclub-wise) expanding rapidly, almost uncontrollable and copiously with free form voice samples. Looping and oversampling alongside the massively bizarre and almost vintage Yamaha RS7000 assimilating audio and midi functions, all conducted by Toymob and his peculiar patchwork of gadgets. 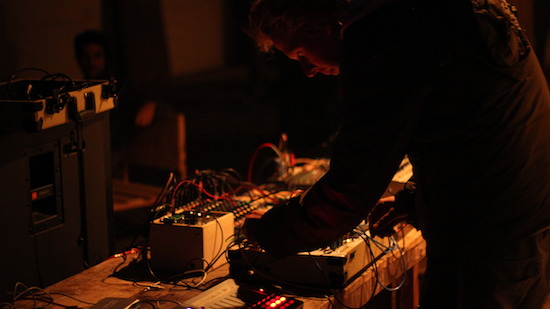 Working together for over 3 years as Sindrome, both Vinny and Ashhar have forged many live recordings and collaborative projects in the field of Internet broadcasting and sound archival. Vinny Bhagat a.k.a Shivnakaun stacked an array of linear sound passages, short noisy waveforms and blurred piano recordings, meshed together, skewed up and decimated further, almost falling apart, only to reassemble with surges of visual shapes and cut up film. The effect was staggered and the audience gets into the disquiet mindset, creeping into the atmosphere of the venue.

Hemant Sreekumar’s audio video onslaught via Puredata was clearly a hard and confirming contrast: a sensory charge to most that were present at the event. Digital harshness of code generated music is immediately disconcerting to most and a ‘wow’ calling to few. At this point I wonder… Where is Kid 606? The broadly unstable effect of deep detuning frequencies (pre 70hz) riding under atonal slaps and screams of white noise only to be further ragged on by ‘glicky’ FM snaps and subtle high frequency carpets, can be hard to comprehend for the usual EDM hipster bopping inside some nightclub. “This is really spooky … the visuals and the music ” a slapdash comment from someone in the audience.

Disquiet provided a memorable experience for those who love noise and follow chaos in sound and visual. Some were stoked at the gadgets. Some went home just zonked by the sound.