Her latest collaborative project with Omer Asim (humbledaydreams and one-half of 6LA8 titled gardens in us is an ode to the symphony of collective consciousness. “Sound enables us to walk through hazy corridors of our minds. Where nooks and corners of unnoticed memories float, we wish to reside there, and welcome you to daydream with us” – that’s how the artistes describe the project. “gardens in us is inspired by our mutual appreciation of the unknown. It is a musical escapade. It was our interest in surrealism, metaphysical explorations and nature that led to the project. Working with Omer, the process was very intuitive. Our tracks took inspiration from some of our documented dreams. They are all really just tiny glimpses into our subconscious,” explains Ramsha who is currently living in Berlin.

According to her, the sounds were developed quite organically. They used everything from utensils to a broken acoustic guitar; sampling, convolving and letting intuition guide the way. The compositions often interlay meaningful transitions with synchronous rhythms. There’s a sculptural motif in the sonic shifts, an ambivalent dialogue between the artistes and their art.

“With ‘Whispering Gardens’, it all started with a progression being candidly played on my father’s harmonium. During our listening sessions, we intuitively leaned towards spoken word. We had kept a log of our strangest dreams, and Omer read those over the track,” Ramsha explains, “This added a whole new level of depth to our sound. In fact, there was a coincidental click in this harmonium recording which transformed into a faint hint of a rhythm. So, I built and carved the entire track’s mix around it instead of eliminating it. Also, recorded samples of crickets around the suburbs led to the tonality in ‘Moonlit’. Just simple elimination kept the mood in a slightly joyous ambiguity. It was an enticing idea to add bass to the track but we willingly decided against it.” This summer, apart from the duo focusing on playing some shows for gardens in us, Ramsha will also work on another collaborative project with Robogeisha and Anna vs. June. “In fall, I will have the amazing opportunity to work with Robyn Schulkowsky and Gebrüder Teichmann. I will also begin working on my next release this year,” she says.

It is her dream to land the artist residency in Conseil Européen pour la Recherche Nucléaire (CERN) — an institute aimed at advancing the boundaries of human knowledge by delving into the smallest building blocks of our universe; where physicists and engineers study the basic constituents of matter – fundamental particles. Their art and science programme works towards fostering a dialogue between artists and physicists. “I find theoretical work to be liberating. Scientific temperament benefits from the exhilarating framework of art just as much as art can benefit from the critical directivity of science. Both can take each other’s places. Everything is intertwined, and every discipline influences one other. I’ve grown more and more interested in working at the intersections of these disciplines that are in a way a combination of comforting certainty and delightful ambiguity. It stirs up my imagination,” she says, “I feel more fulfilled when I can create something this way. Philosophising our intent as creators helps in becoming acquainted with not having answers to every question.” 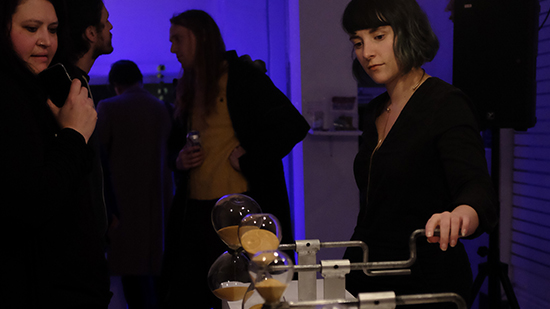 In 2018, she showcased her first solo exhibit titled ‘Sculpting Time’ — an interactive sound art installation created for Sonic Art Series at HAVN (Hamilton). She built it around the concept of creating a space where the individual can ‘mould’ time tangibly, and sonically build agency with this moulding as the levers of the sandglass clocks are turned. “Each sandglass clock affects the audio loop uniquely, and the perception of time goes further away from quantization as the day progresses, and the observer’s interaction with the piece increases. It is difficult for us to perceive time qualitatively because we are so conditioned with and grounded in our daily routines, reminders and everyday tasks – all of which decide and reinforce for us the linear, directive perception of time,” she says.

While studying design, Ramsha noticed a constant under-appreciation for a multisensory approach in the discourse. As artists and designers, she believes, it is important to understand and embrace an increasingly trans-disciplinary approach. Therefore, her thesis research and project titled ‘resonant: dissonant’ revolves around acoustic ecology in a framework of critical design.“I am at a dystopic stage with respect to my musical identity. I am exploring a lot in the realm of spatial audio. Since my music is an extension of my being, one may find relatable abstraction in it. I want to be able to design musical realms where one comes to take a living breather from the chaos of existing,” she says.

‘resonant: dissonant’ is an interactive immersive environment enclosed in four ‘walls’  where an individual walks in to interact with a pair of headphones accompanied by a headtracker, an overhead microphone and Ramsha’s research booklet. Instructions guide the observer through the experience of ‘looking around but only with ears’ and prompting to ‘flip through the book’. “Upon doing so, they begin to leave an acoustic image in the space. While they can listen to aforementioned soundscapes and explore them spatially if they remain acoustically unnoticeable, the more disruption they create, the more anthropogenic noise takes over the soundscape. However, they’d witness a visually rewarding response as they get more interesting with increased disruption,” she says and further explains that the intent is to force the observer into making an active choice about what experience they want from the space, hinting at the underlying problem of the visually-oriented human-centric design approach, which exclude creatures that may not be visually dominant. “It is to bring more awareness around how ecosystems can be better cared for if only we become more empirically diverse when analysing and/or altering an ecology.” 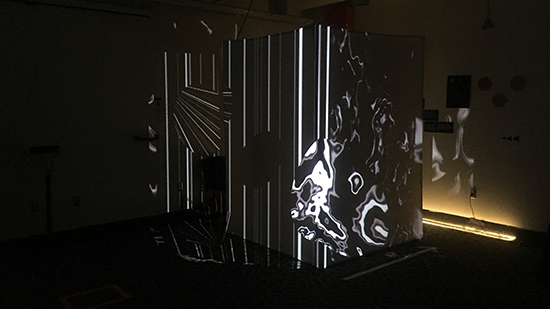 She believes that explicitly critical work is sometimes necessary to push forward dialogues we spend most of our lives avoiding just to shun the discomfort brought on by the discourse. According to her, humanity stands at a point where being numb to the most atrocious realities is the new ‘comfortable’. Based on what she has observed and seen personally, music is enabling the youth in Pakistan to be more proactive in their community. It is helping them connect with like-minded individuals and break hetero-patriarchal barriers. In the past, she says, it has had an immense political impact.

“Music is a gift of the cosmos to us. It has the ability to communicate complex ideas, emotions and narratives universally. It doesn’t depend on language. It doesn’t have a nationality. It is not ‘owned’ by a person or a state. Music brings together people from all over the world every day. I remain hopeful that music would help eliminate sub-cultural tensions eventually too,” says Ramsha, “The more we collaborate, the more we contribute to its positive social impact…”