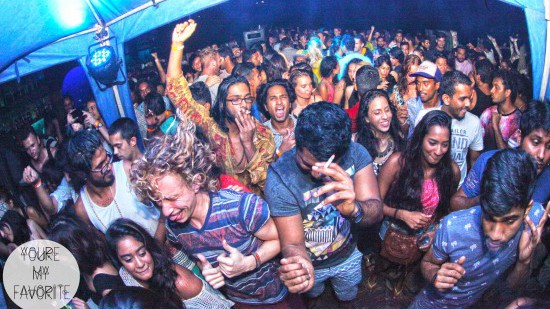 There was a time when the thought of suffering Sri Lanka’s dreaded nightlife was too unbearable to imagine. I had just finished university abroad and like many of my peers, reluctantly agreed to move back home to Colombo – much to my parents’ delight. I had little idea of how I’d cope with the dire entertainment on offer.

You see, Colombo’s clubs – of which there are three or four major contenders – have a rather dubious reputation. This is mainly due to their predominantly violent clientele and their trashy, tedious, electronic house fare. An average Friday night out at a club in Colombo is, first and foremost, dominated by monotonous electronic dance music on repeat. At some point in the night, amidst all the sweaty bodies grinding on sticky floors, the dance area turns into a boxing ring for jealous undesirables to fight out their insecurities. Someone usually ends up getting a bottle smashed over their head. Repeat cycle.

Sure, the West had similar clubs – but it also had alternatives. It was not uncommon to attend several gigs a week in Amsterdam and lap up the latest and greatest in indie music at whatever converted squat took our fancy. And when heavier nights – involving dancing – were called for, there was always the welcoming sound of thumping deep house at Amsterdam’s biggest techno club, the Trouw. Miraculously, we would emerge unscathed: not a punch was thrown, nor eardrum assaulted. Sadly, Colombo just did not compare.

Or so I thought.

Just over two years ago, I was blown away by what has since come to be known as Colombo’s biggest party of the year: the Goethe Institut’s phenomenal Pettah Interchange. Two years ago, organizer Jan Ramesh Schoning de Saram was instrumental in bringing down some of Europe and India’s finest electronic acts, creating a thriving atmosphere within a melting pot of Colombo city dwellers. The first of its kind in Sri Lanka, Pettah Interchange was held in the car park of the abandoned Gaffoor Building – a charming colonial structure built at the turn of the century – in an attempt to recreate the feel of a Berlin warehouse rave.

Pettah Interchange, unlike many other annual Colombo events lives up to its name and constantly outdoes itself every year. To balance it out, the Goethe Institut hosts its own electronic music events every few months. These are intimate, bi-monthly gigs that usually draw in a predominantly artsy crowd – perfect for us Colombo lot, stifled with the dull and wearisome club scene.

But what about the south of Sri Lanka? In the last ten years, the beachside towns of Hikkaduwa and Unawatuna have become a getaway for suffocated Colombo residents, in the mood for sun, sand, sea and a party. However, enjoyable as these parties were back in the day – when I was less exposed to eclectic music and more vulnerable to the delights of alcohol – they fail to do much justice nowadays. Repetitive beats, a dodgy male-dominated crowd and zero ambience; I grew tired of the “EDM scene” down south.

GMM: “It’s about getting the lau drippin’ and the beats poppin’ ” – Shafni Awam

That was, until August 2012, when a group of people not much older than myself formed ‘The Good Music Movement”.

Frustrated with the dearth of ahem, good music down south, the members of the Good Music Movement decided to throw their own parties, choosing to focus on location, clientele and most importantly the music itself (a blend of deep house and nu-disco, amongst other genres). With an eye for exotic venues, they began with Samsara, a small party held on an abandoned part of Unawatuna beach, overlooking the sunset. They then turned the tables completely, hosting a fancy dress-themed Halloween party – titled “Lunasea” – at Galle’s iconic Closenberg Hotel, a charming colonial property on a promontory, facing out onto the Indian Ocean. The music ranged from a playful 12-piece experimental jazz band to the heavier sounds of Todd Terje.

This was followed by a pool party – Azucar – at a boutique hotel in Talpe during high season, an event populated with the sounds of Hot Natured. Ravi Bandaranaike – GMM’s co-founder and ‘crate-digger’ – has since set the gold standard for curation, having brought down deep house don Giles Smith; to date, one of the highlights of the music scene down south. “(We plan to) keep it small, fuzzy and intimate, with big sounds and dope artists weaving in and out”, replied Shafni Awam, a spokesperson for GMM, commenting on their future objectives.

As Deep As It Gets

With the opening of Luna Terrace at Closenberg Hotel – a venue sporting a 180-degree style infinity pool, a deep sea cocktail bar and a rustic sushi stand – hotelier and DJ Emanuel Abeyewardene formed his own brand. A bi-monthly affair, Luna Terrace parties import a variety of international deep house acts and usually start in the early evening as the sun sets and continue late into the morning. Having attended many an event, it is clear to one that these parties have become something of a haven for the Colombo elite and the English inhabitants of Galle, the latter of whom dominate the parties during low season. Furthermore, what is interesting to note is that these parties are not age-specific, usually mixing together post-uni students in their mid-20s, young professionals in their 30s and a more mature clientele in their 40s, 50s and sometimes 60s; a rare but welcome occurrence.

An impressive resume of artists has been featured, including the astonishingly frenetic Algorhythm, the bass-laden Berlin-based Oskar Offermann and most recently, the internationally acclaimed US/French duo Benoit and Sergio – quite possibly their highest profile act to date. Alongside international acts, both Abeyewardene and Bandaranaike play at Luna parties (as Emanuel and Ravi B, respectively) with a few other regulars like Leandro and Bobo Shanti DJing early in the morning. At sunrise, people tend to jump in the pool and bask in the early morning sunlight, a truly magical experience. The die-hard Luna regulars continue dancing into the morning as the music becomes more nostalgic and relaxed. The parties usually end late morning. And the best part about all of this? I’ve never witnessed a fight at Luna. Its patrons simply aren’t the jealous, territorial sort.

So I suppose I can’t really complain. I was lucky enough to make the move back home at the right time and be greeted by an electrifying new music scene that (fortunately) didn’t involve a plethora of fights, unbalanced ratios and ‘exclusive’ VIP-only entry. I’m excited for high season; aren’t you?