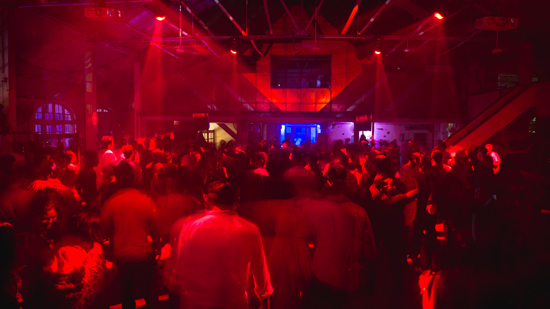 I’m in an auto rickshaw — a tuk-tuk in local parlance — and we’re taking a U-turn opposite the Kingsbury Hotel in Colombo – 1. The person driving the tuk-tuk is an affable middle-aged man, upon recognising I’m Indian, he gets excited and insists on talking to me only in Hindi, familiar as he is with Indian and Pakistani culture.

During our conversation, he gets distracted, and the side of the tuk-tuk smashes against the sidewalk. I’m unhurt but my friend, who was riding barefoot, has a biggish gash on his thumb toe, he seems OK, but he’s also hiding the pain.

It’s an odd way to end the trip. On 6 August, the previous day, I’d been at the fifth edition of the Pettah Interchange which was held at the Transworks House (a five-minute walk from Dutch Hospital), an abandoned heritage site that will soon morph into the entrance lobby for the still-under-construction Ritz Carlton behind it. It’s a wistful, red-brick design with lots of columns, pillars, posts, high ceilings, interconnected stairwells, and an uneasy symmetry. An ominous sign greeted visitors, warning them to “Please be careful” as “this is an abandoned building”. These days, it’s basically a giant construction site, with lots of dust and massive bulldozers doing their thing. Even so, the building is fairly clean, but that’s no surprise — most of Colombo – 1 is pretty much spotless. (It’s disconcerting for me, since in my country the streets triple up as garbage dumps and toilets. Also, in Colombo, cars grind to a halt when you cross the road instead of speeding up; imagine.) 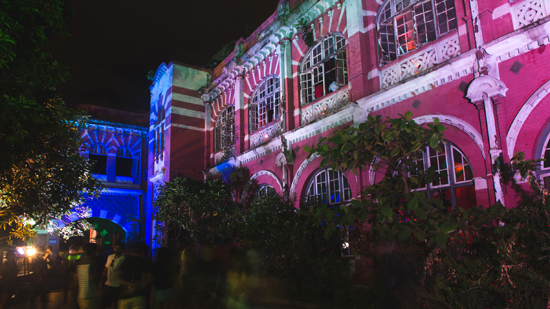 This is an elemental aspect of the Pettah Interchange: Picking old, abandoned sites as venues, and curating an experience-driven gig. Previous incarnations of the event have been held at a “dodgy, soft-porn” movie hall called the Rio Cinema, as well as a marketplace. Most parties in Colombo are on the beach or in clubs in hotels, so this series serves as a welcome antidote.

Jan Ramesh, my host and the organiser for the event (along with Asvajit, who also performed — twice), picked me up from the street in his dark grey automatic scooter. I was taking pictures of a temple set to the backdrop of cloudy skies, like any self-respecting tourist would, when he arrived. Jan Ramesh is — as his name suggests — half German and half Sri Lankan. Very much part of the club scene in Berlin, he moved from there to Colombo in 2007, with plans of bringing to the city an aesthetic of underground parties. It took a few years, he told me in his unique accent, but it’s happening now.

Jan, who works with the Goethe-Institut, started the Pettah Interchange along with Asvajit and the then-director of the institute in 2012 in partnership with Border Movement. The idea, in his words, was to have a “proper party”. Asvajit picks the artists, based on stuff he likes and has heard about, as well as recommendations from people he respects, and then they get to work overhauling the venue. This year, the line-up included, among others, Jens Bond (Berlin), Paul Mad (Budapest), Nigel Perera (Colombo), DJ Nasttey (Maldives), Al Ak (Pakistan), Nyma(Berlin/Tehran). The music on the bill was essentially multiple variants of house and techno, with a couple of welcome outliers. The whole thing started at 9pm, and went on till 6am the next morning. 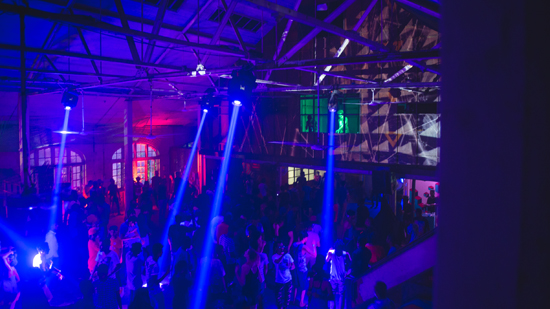 The Transworks House has had many past lives. Built in 1908, it served as home to the Ceylon Works Department at first. It’s a historical site boasting exquisite Edwardian architecture. Jan spoke of how Fazry, one of the Pettah crew, used to come here to pay off his parking tickets often, during its years as the City Traffic Police headquarters. For a period, it was the telegraph office. Along the way, it was leased out for an allegedly pitiful amount to an Indian company. Then, for some time, it was just lying in ruin. Anyone could just walk in and out. At the Pettah Interchange 2016, the Transworks House gained yet another life: It was a barbaric dungeon reimagined as a massive party.

Visuals were imposed on to the staircase. There were more people in black T-shirts and tops than I cared to count. One guy, possibly lost, was wearing a Chicago Bulls cap. Oh, and he was wearing a Chicago Bulls jersey and Chicago Bulls shorts too. On sale for Rs. 600 was a 500ml can of Tiger beer, while a lot of the people were also drinking arrack, the whiskey-adjacent local spirit. The air smelled damp — a fertile cocktail of alcohol, sweat, smoke, and expensive and cheap perfume.

The upstairs stage, the Attic, had the performers ensconced in a rectangular booth on a mezzanine-like floor, fully lit in technicolour and distanced from the crowd below. Visuals found their way on to the booth and the ceiling above. An elaborate mural (next to the Remand stage) had its dinosaur-like creatures almost jumping out once the lighting kicked in. 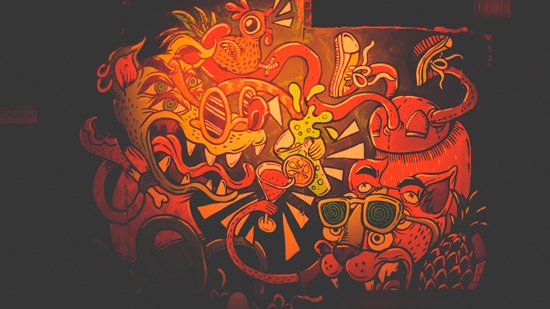 Mural by Ruwangi at the Remand Stage

Asvajit, next to the soundboard at the back at the Office stage, was quite kicked with how the whole thing was turning out. It was packed; people were having fun, dancing and socialising. This is what he’d wanted. At around 2.30am, I ran into Jan. Unlike Asvajit, Jan was a little piqued at the turnout — he’d been hoping for 2,000 people, but at the time the count he had was 1,200. Everything else was going well.

As a brief lapse into exposition — a “tell, don’t show”, if you will — I should explain that there’s a reason why I’m spending so much time detailing what the place was like. See, music is almost never about just the music. The context, the place you hear something, the mood you’re in, the people you’re with, the lunch you ate, all play this indescribable role in shaping the experience of it.

In that vein, there seems, to me at least, a restrictive limit beyond which music in a regular live setting (a pub or a club or maybe an open-air venue) fails to incite any further aesthetic joy. There’s only so high you can go before the experience plateaus and begins to fizzle, wafting and blending into past memories. In an unconventional setting — like, say, an abandoned warehouse-like building glowing in neon lights — the diminishing returns don’t quite kick in. It can, in the right setting, be limitless. 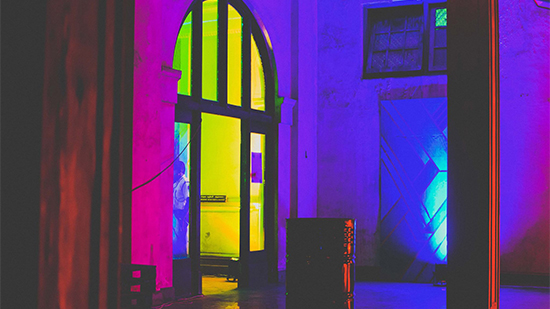 Entrance to the Office Stage

At the Pettah Interchange, the music had been programmed in a way where the transition from one artist to the next was seamless, rarely even leaving room for applause once a set finished. The music largely fell into the house/techno space, with a groovy, walloping beat serving as a carpet on top of which brawny synths grappled. The pulse kept your feet moving, for nine hours straight. The tempos didn’t waver all that much. Ear fatigue, naturally, can set in. That is, unless the world around is throwing constant, unpredictable stimulation your way from all sides. They could be the lights floating in and off the DJ’s face in her little spaceship booth above you, or a community men’s bathroom where the only way to pee is into a common sink. Or an oddball painting; a surreal visual glazing about in mid-air; a guy from the construction site outside staring through the window, trying to understand what the fuss is about.

Nine hours for a party is a long time, and it seemed to me that the organisers were clear that they wanted to craft an actual experience that went beyond gawking at the bass whirring from the PA or the artist directing the crowd to jump and dance. It all seemed a deliberate attempt to shape a remarkable and unusual encounter with the underground. Like it had been thought out and ‘curated’, not just bundled together from a long list.

The only respite was the Remand stage, a small room unlike the other two stages, one which could only house around 50-60 people at a time. It had intimacy and a direct line to the artists playing for you. You could view the goings-on there from grainy footage being displayed live in the waiting area outside, which is where people socialised whenever they needed to take a break from the frantic, relentless sonic assault elsewhere. This stage turned out, also, to be a bit of a personal highlight. 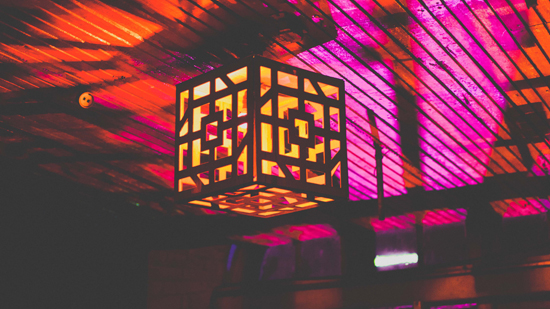 Dinelka (from Colombo) had started the evening, playing a two-hour-long set that flowed from noise-heavy, glitchy, free-form sound vignettes into slightly more structured constructions, all of which he was manipulating live. Al Ak (aka Danish Faruqi), part of the well-known Forever South crew in Pakistan, took over with a slightly more upbeat set, but with plenty of departures into molten down-tempo passages to add variety and movement to his set. A high point was the live set by Tomcat + Magnum, from the Musicmatters institute, who were accompanied by a couple of able MCs as they put on a set that had the whole room bouncing in rapture each time the bass and drum patterns locked in to form a bubbly springboard.

Marta, a Spanish expat living in Sri Lanka, was beaming the entire time, searching for the bar. Sabin from Austria, and Aneel, her Sri Lankan friend, couldn’t agree on whether the alcohol was affordable or expensive. They were having a great time nevertheless. Aneel mentioned how only, like, 30% of the crowd could conceivably be seen as the Sri Lankan clubbing elite — that this was, given its once-a-year novelty, an inclusive event. Indi was in suitably high spirits, but she did complain about the fact that the gig was too scattered, too spread out, unlike previous editions. (I may have gotten the names wrong given how loud it was.) Everyone, as you’d expect, just seemed to be in really good spirits.

But stories, as any reader or writer would know, need villains. And I was desperately searching for one. Al Ak from Pakistan, who became my friend over the course of the evening as we listed the reasons why we hated each other’s countries, was too measured to be it. Musicians often tend to be moody and annoying. But, as it turned out, he had a tendency of looking at things from multiple angles like a reasonable, rational person. Even the set he played was a mix of his preferred bass-heavy, melodic, down-tempo ruminations and all-out club tracks. The people I spoke to in the crowd, too, were just far too excited and cheerful to have any ill-will that I could exaggerate in words. 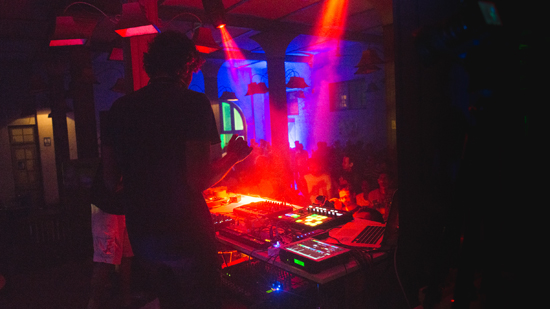 Then, around this time, around 2 AM, Jens Bond got on at the Attic stage. Ironically, he appeared much like an evil Bond villain would from where I stood, way at the back, looking up toward the booth he was entrenched in. He looked like a badass — with his tattoo peering through his T-shirt sleeve — like he was better than me, and I thought I had my man. But even he let me down; as the set went on, Jens Bond built up a strong connection with the crowd, and I realised he was only doing what he loved and my initial skepticism was misplaced.

Maybe it was the communal appreciation of music. Or the sense of belonging. The lure of the underground. The arrack. The building. Or the humidity. Whatever; there was just an enriching air of positivity at the Pettah Interchange, with the music at the centre, and all these other factors just sort of propelling it upward. There was really very little (if at all) judgement. Stepping out of the tuk-tuk that had veered off track briefly, enquiring about the well-being of the driver and handing him a bottle of water, I understand that that can only be a good thing.