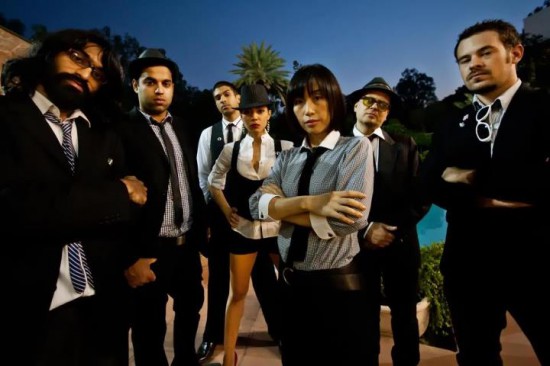 The risk any band runs by marrying their music with themes that involve social commentary is that the messages, more often than not, ring hollow. A sexually-charged song such as ‘Rough and Mean’ can be misconstrued as the means to stir up a storm, seeing how India reacts to anything that involves the public mention of sex, in spite of being a country that procreates at a rate faster than that of rabbits. However, The Ska Vengers’ new album manages to address profound and impactful social causes with a lyrical naiveté that dares the listener to refuse to take life as it comes and get caught up in a larger scheme of things, while discarding de rigueur bullshit and everyday clutter of modern living.

Stefan Kaye and Tony Guinard’s honeyed harmonies are driven by nostalgia and borrow liberally from the 1920 German Philharmonic Orchestra in songs such as ‘(Why Don’t You) Do Right’, incorporating the influences skillfully, backed by Raghav Diggy Dang’s appropriately unobtrusive guitar that subtly lends to the fullness of the sound. Rie Ona, Yohei Saito and Juan Carranza each continually tease you with a saxophone, trombone and trumpet respectively, transitioning from the jazz-like ‘The Boy Who Radiates That Charm’ to the deliciously sloppy, reggae-style ‘Mr Big Stuff’, while Nikhil Vasudevan stays in step with the pulsing, unrelenting rhythm of his drums.

The strength of Miss Samara C’s voice and talent cannot, for one moment, be dismissed and her unbridled enthusiasm is unmistakable in her cries, singing, inflections; the songs, however, are left in desperate want of rasp. In contrast, Delhi Sultanate is moody, gritty and emotional (in ‘Bam Intifada’, for example) – seeming to almost incite a riot; one that you can be a part of at a moment’s notice, while your spirit fills up with the possibilities of change bigger than you – at least for the length of the songs.

Combined, these eight members and their tricks have produced something that feels brand new and impossibly old all at the same time, and is enough to make you look forward to see how their sound grows. While their album may not usher in a new musical epiphany for the ever-thirsty masses, it may just be the album to change someone’s life.

The album is due to be out this November on Times Music.

Here’s some (pretty shaky) video footage from their last gig at the Urban Mela in Delhi October 2012: