Aditi Veena and Lakshya Dhungana were travelling around Nepal a couple of years ago, setting up impromptu audio-video busking performances for strangers. One of those happened to be outside a small shop selling momos. Veena, aka singer-songwriter Ditty, was playing songs from her new album, ‘Poetry Ceylon’, using not much more than a mic, a guitar, and an amp. Dhungana, a filmmaker, would put up a bedsheet and use her projector to show movies about Sri Lanka that she had made. This was Streets For Us, a project the two started back in 2016 when they were both living in Sri Lanka. Dhungana originally wanted to make a film about catcalling, but further conversations between the two led to this instead.

“We thought we’d make a film, basically, on going out and playing music in the streets, in the dark. And sort of just being outside, reclaiming the space. And then seeing how people respond and react to it. It was risky, yes, but we also got a lot of love. There were bits which were so unexpected. It was incredible,” she says. We’re sitting at Perch, a hip café in Vasant Vihar in Delhi, to chat about ‘Poetry Ceylon’. She’s only in town for a short while, visiting home and rehearsing for her upcoming five-city tour across India. After that, she heads back to Goa, where she’s now based.

People who were inside the momo restaurant stepped out and gathered around to watch them play. The owner came out too, setting up little stools for the crowd to sit. “And then,” she says, “this woman, the owner, came out and started crying. She gave us some money. She said, ‘I understand why you’re doing it. I’m also a woman, I get it.’ Every time we’d play, I would talk to people about how unsafe it was for us on the streets. ‘So we’re here and we want to play our music for you.’” 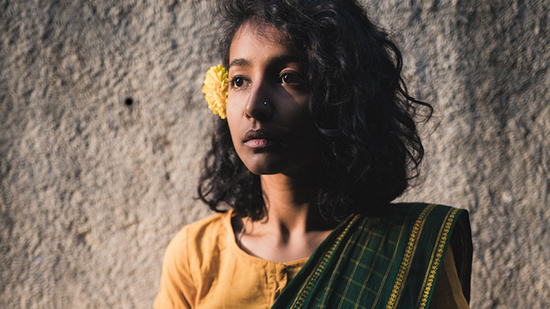 They toured around Sri Lanka, Nepal, and India, drawing different crowds and reactions. In New Delhi, in the same market we’re in right now, she tells me how they were surrounded by drunk men outside a popular local bar. One of them kept trying to push her away and take control of the mic so that he could sing instead. The only woman there scolded them, telling them how unsafe it was to be doing this. “Ghar jao, go home!” people would shout. There were catcalls and suggestive remarks. In Mumbai, Dhungana even got arrested for setting up her camera. Ditty has fond memories of Nepal, where people were warm and responded well to the music. Sri Lanka was largely positive, while India was quite disappointing for them. There’s a bunch of short clips of the performances available online, though they’re still trying to figure out what to do with the film.

She wants to resume the project and do it on a bigger scale, but for now she’s focussing on the album tour. ‘Poetry Ceylon’, her first full-length record, released on June 3 via the label Pagal Haina; her bandmates, Dhruv Bhola and Shantanu Pandit, contributed to the process as well, with Bhola helping out with the arrangements and Pandit recording. It’s an eight-song release that charts her journey through Sri Lanka, with a running thread of the environment and urban ecology. Ditty is an architect and urban ecologist by day, and she has been heavily involved in sustainable architecture and urban design. She feels strongly about the environment, and has dedicated her life to it. She worked at the Auroville Earth Institute before moving to Sri Lanka in 2014, where she worked with an architect on sustainable projects. She’s worked on building with earth, using soil, consistently in the past, as well as repurposing waste. Ditty returned to India in 2017, giving a Delhi a shot once more. “I grew up here, but I’ve always just really disliked it, unfortunately. There are things about it which I love, but somehow I’m always finding myself, like, really moved by it. I don’t know what to say, I’m just quite sad when I come here. There’s this thing that just looms over my head,” she says. 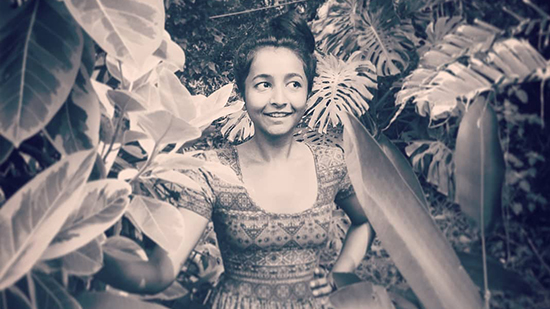 Ditty lives in Goa now, and has set up her own practice where she’s helping individuals and companies design edible gardens. “It means helping them become more sustainable. Say if you want to lead a more sustainable life but don’t know how to, I can help you start composting, design a garden for you, reduce your carbon footprint.”

These thoughts find a way on to the album as well, on the song ‘Eulogy For A Sparrow’, which is about endangered species and how sharks are slaughtered in the Indian Ocean for their fins. It’s hard to separate Ditty’s personal view of the world, and the things that move her, from the music she writes. ‘Poetry Ceylon’ is an extension of her thoughts, transposed into musical form. It’s a classic bedroom record, with a warm feeling of intimacy heightened by the depth of her singing and the gentle plucks of an acoustic guitar. She’s also experimented with spoken word, as a result of her exposure to poetry in Sri Lanka, most notably on album opener ‘Food City’. She explains how the song is based on a conversation with her house-mate in Sri Lanka, after she’d split with her partner.

“We used to go shopping to this 24/7 store called Food City, and so, one day after work, I went there and I just found it really hard to go there. I came home and my roommate was like, ‘There’ll be a time, Ditty, when you’ll be happy in Food City!’ And then that just became the song,” she says. ‘Deathcab’, a popular single from the album, is about the period she spent in a long-distance relationship with her partner, and how they bonded over a Death Cab For Cutie song called ‘Transatlanticism’. There’s a confessional tone running through the lyrics, as she lays bare her experiences of moving to a new world, of feeling sadness, of leaving Sri Lanka. Her relationship with nature plays a strong role in the narrative of the songs.

Music has always been a part of her—she started singing with Delhi’s choir collective Artists Unlimited at the age of 14 and continued to be part of various bands in the city over the years. A turning point came after the death of her father in 2014, where she found solace in music. “You know, everybody has their own questions. What I was thinking of was, ‘Where is he? Is he OK?’” She wrote a poem for him, which she wanted to turn into a song, and so she picked up the guitar (‘Daddy’s Little Girl’ from her 2015 EP, ‘Mumblings’). “And then I was like, OK. I figured he hasn’t gone anywhere, he’s gone back to the earth. How I made peace with it was through music. Music, for me, is just sort of helping me make my life bearable.”