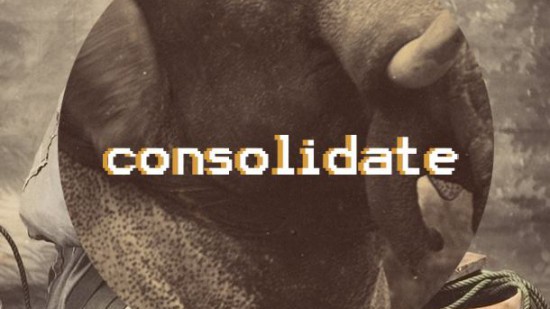 Bangalore has always been a breeding ground for nascent concepts and ideas. The city, blessed with its fair share of accomplished musicians and exciting new talent is widely recognised as one of India’s most exciting musical hubs. Embracing the out-of-the-ordinary has long been a feature of this city’s music-loving aficionados. A bevy of such concepts find wings to take flight in namma Bengaluru, and one such concept is ‘Consolidate’, a community where fringe electronica thrives.

The brainchild of the man behind RHL and one half of Sulk Station – Rahul Giri, Consolidate started back in 2013 and is just beginning to turn heads. “ We are right now at a very formative stage. It is a mix series, a loose collective of artists (mostly based out of Bangalore) and maybe a blog to a certain extent.” says Rahul modestly. A quick look at their Facebook page and you can understand why; what started as just an idea has become an important medium for showcasing alternative and experimental music from the city.

“The basic idea is to bring musicians together and the idea has never been to stand out” says Rahul. In just over a year, Consolidate has managed to slowly build a foundation based on artist mixtapes and showcase gigs. In a way, it is a fresh breath of air in a city that was on the verge of being dominated by commercially orientated sounds. It is also a welcome platform and sounding board for upcoming bands and individuals who would otherwise find it difficult to gain a foothold in the country’s ever growing music industry. Artists such as Oceantied, Iyer and DiscoPuppet have all been featured by Consolidate.

Machli – a Bangalore based band that has slowly but surely, been making all the right noises with their indescribably unique sound – has also been featured on the Consolidate series. Incidentally they recently released their debut Ep “Obtuse + Divine” which you can listen to here.

In an exciting atmosphere where music is constantly evolving, consistency along with patience is important. “I’m really excited about the kind of artists that I feature and the kind of music that’s coming up. Above anything being persistent is the most important” says Rahul, optimistically. A valid point considering the short shelf life that the attention of any new concept garners in India. It is probably based on this very notion that Consolidate also feature one-off gigs at The Humming Tree that are very well received. This is something that Rahul is very keen on working towards and with good reason. Hearing a mixtape in the comfort of your bedroom/car or at work is far different from experiencing it live. “We are working towards setting up a monthly gig series in partnership with The Humming Tree. So that’s really exciting. Hopefully we will get to showcase a bunch of artists associated with Consolidate in the coming months!” he says.

However, it is quite clear where Rahul wants to go with this. Contrary to usual practise, he goes against the grain by admitting that this isn’t about trying to stand out, nor is it about creating an identity (which is ironically an identity in itself). He stresses the point that this is a collective of like minded people, artists and listeners alike and shall remain that way. “I am not bothered about reaching out to wider audiences at this point”, he adds. When asked about what the future holds for Consolidate, he admits that he would like to maybe take things to the next level. “ More gigs, more mixtapes, artist showcases etc. I think eventually I would like to see Consolidate function as a record label.”

You can listen to Consolidate’s latest mixtape here.