The seven-song “release” is really an ode to Delhi. It’s about the many ways in which the city ate away at his sanity, at his state of mind, bit by bit. “All the songs came out of really dark places,” he tells me. “It’s mostly about this ‘Delhi limbo’. I’m fucking bored at home; I can’t afford to go out. I don’t even like going out. After a point, what do you do? I’m not, like, into sipping wine and talking about poverty. Even the house parties, or Hauz Khas Village or whatever… that’s the only thing people do. After a couple of years, it turns into the same thing: go to someone’s place, get drunk, talk politics, come back home. I refused to get out of my room that much. I was writing songs to cope with that. I started writing, just to let it all out. I was angry.” Thakur, originally from Kolkata, came to Delhi to study social sciences, before working in the same sector. He had been feeling disillusioned in the industry and the unethical way in which it functioned. His personal life was in tatters as well, and he was going through a phase of prolonged depression. The grind of the city had gotten to him. “It’s like you’re ‘performing’ your life, but the crowd is not really applauding. Like playing a lame cover gig every day.”

And so he took to music, writing what would later become ‘National Animal’. Thakur has been playing music ever since he was a kid. His instrument of choice was the guitar, which he learnt briefly under the distinguished tutelage of Amyt Datta, the celebrated guitar player who’s been part of Skinny Alley and PINKNOISE. “In Kolkata, at some point of your learning, you have to go to Amyt da.” He had a band that, he says, survived on enthusiasm alone, given the sparse nature of the live scene in the city, before dissolving due to musical differences. He tried for “a long time” to get something going again, searching in vain for a drummer who could complement his style of playing.

Eventually, he gave up, turning to electronic music purely out of necessity. In Delhi, Thakur was surrounded by a small but dedicated “group” of independent musicians exploring sonic boundaries. He was living with a member of lo-fi postpunk band Smooth, Relax and another who’s now in Peter Cat Recording Co.; he’d struck up friendships with Kartik Pillai (aka Jamblu, among other avatars), and Shantanu Pandit, and a host of other young musicians in the city. They were all trading ideas, sharing music they were interested in, learning from each other, inhabiting the same culture spaces. And each dealing with their own specific version of existential angst and ennui.

‘National Animal’ (the album) is seven songs long, and has been released under Simian Records, the indie label and studio run by Kartik Pillai. In addition to the songs, there’s also a music video for ‘Can’t Get Enough’, which Thakur featured on despite his reluctance and general shyness. He decided to ditch the guitar altogether for these songs, choosing instead to focus on electronics and production — he developed a keen interest in different synths while working on it — since he found himself drifting to the same old dynamic in his playing. That said, it rarely sticks to a predetermined sound or genre, and jumps in style constantly, from the self-parodying spirit of ‘Bakchod’ to more synth-heavy ambient departures to the pop-song captivity of ‘Fountain Of Love’ (a song which features Thakur’s sister on vocals, aka Sister Assister). It’s a collaboration-heavy project, with multiple voices taking hold of the narrative; there’s Sister Assister, Thakur’s own booming baritone, and the almost-comical rapping style of MC Azad, among others.

Partly the reason for this, Thakur explains, is his fondness for versatility and variety in music, citing his appreciation for Kanye West’s chameleon-like control across styles. He enjoys working with different voices, conventionally off-beat, “interesting and different-sounding” voices. “I’m a big sucker for that. Even if you think about the early Beatles. I see the album as a narrative; the sounds don’t really define an album for me.” The sound has also been shaped by the collaborations, and the energy and influences that the many different performers featured here brought to the songs.

‘Bakchod’, for instance, features MC Azad rapping on top of the beats, as Thakur creates a character worthy of mockery and ridicule. “It’s almost anti-rap. We thought, ‘OK, fuck it, let’s make up this ‘heel character’, you know, like in wrestling. It’s a caricature of our own social privilege. I’m an upper-caste, privileged, savarna, heterosexual male. People like us are a buffer between the not-privileged and the people in power. While at the same time keeping hold of what power we have. We have to destroy this buffer we’ve create.” The self-parody on the song, then, is perhaps an acknowledgement of his own privileges. The other rap song on the album, ‘Send Me Off’ (featuring MR E and Big Daddy), samples the hilarious fumbling lines delivered by a Pakistani reporter who kept getting interrupted during a piece-to-camera, a video which went viral on the internet.

He is back in Kolkata now; continuing to pay rent in Delhi despite having quit his job didn’t make much financial sense, added to the fact that his mental health was faltering. But during his time in the city, Thakur was part of a loyal community of experimental musicians committed to a DIY aesthetic. He was heavily involved in the production and execution of the Listening Room gigs, which have helped shape the experimental scene in the city and beyond. It’s a movement in which the artists themselves have done a lot of heavy-lifting, working purely for the sake of the music and setting up small gigs at unconventional venues. Thakur himself did sound at many of the gigs. At one, he even stood at the gate, collecting entry fees from patrons. He ended up playing a bunch of gigs in smaller cities, including at Varanasi and Ranchi (and Dhaka, Bangladesh), and those experiences have helped him develop an understanding of how offbeat music can grow. 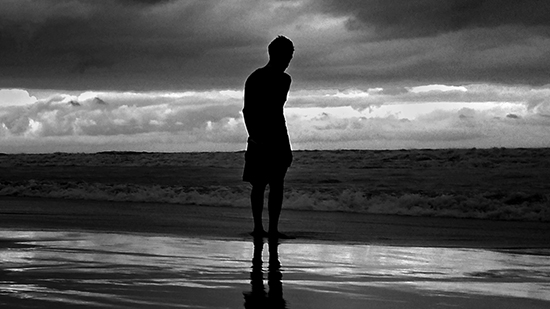 He’s contemptuous of the attitude of musicians or venue organisers who feel the crowd doesn’t appreciate or ‘understand’ what they do. “It falls flat. People will consume whatever you give them. It’s totally on you; maybe you’ve been feeding them shit. In Varanasi and Ranchi, man, the crowds had no context, but the primary feeling of music, which is universal, was there. If it’s good, it’s good. You have to give them a chance; everyone’s willing to try out something new at least once.”

He repeatedly stresses on the importance of performance and of creating a scene, a culture of listening. “People have to keep playing. If you release an album on SoundCloud, no one even looks at it. There’s so many of those. What matters is the living culture. How many times are you playing that album? How many people are coming to see you? We have seen that even if 10 people come together, something on the scale of Listening Room can happen. The Facebook culture is meaningless. I’ll bring in ethics into this as well: if you’re a punk band talking about dismantling society, and you’re waiting for a three-star pub to invite you, then come on, man. You don’t have to bring down the house; you can just play for 20-30 people. The point is this has to keep happening. Like Netflix, it’s episodic. It has to keep on happening.”