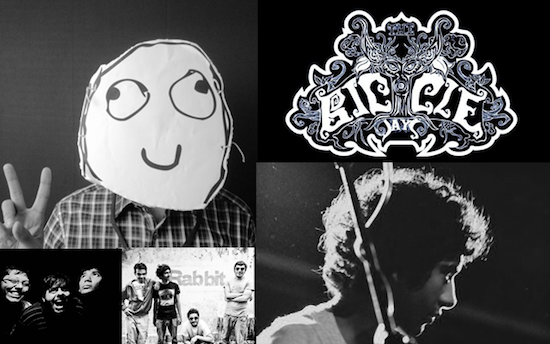 The sun is setting earlier these days, nightfall is upon us sooner. The street lights go on, we see each other as silhouettes in cars’ headlights, signifying the end of the productive day. It’s cold outside and we huddle close indoors clinging to music that is warm – Warm synths like a fireplace; a fiery mess of guitars, in layers that blanket us.

Thin voices multiply themselves to give the illusion of a crowded room, with a warmth from imaginary bodies surrounding us. We carry these voices in our heads to keep ourselves comfortable, they accompany us into sleep or dance or shroomeries. Trapped between headphones, our brains are letting go. Losing track of the time of night; cautiously treading fat bass-lines on the new Glass Candy and old Zombelle.

Somewhere a piano is veering so closely on the edge of falling out of tune, so precariously that it needs cradling, then you watch it unfold magically into a butterfly burst of bass. I once looked upon remixing with disdain, like a process of taking somebody’s art and words out of context and twisting it into something they’d never meant at all. But in the midst of a remix once I first became acutely aware of the connection between temperature and sound: as frequencies fell lower and lingered, wavelengths grew longer and there was naturally going to be that much more heat in a song. Hours go by, watching as millions of sounds get added to the internet, and we continue to wade through them in search of warmth and off-kilter comfort. In a time when nobody’s comfortable having to relate to lyrics, electronic music will become our safe place. As you listen on infinitely, related sounds may start finding their way closer to home. I’d like to think the stage is set for our music to shine.

In releases so far, we’ve heard some comedy-metal(!) and witch-house/chudailstep, and the rest of the year looks mega-shiny. Here’s what we’re looking forward to:

Snowshoe: The more interesting of Sky Rabbit’s electronic subsets, Snowshoe’s been making music we want to keep. Like some cheesy 90’s Four Tet, for our skulking downtempo mornings. They have a small EP coming out tentatively in April, with a couple of new songs and some secret bonus features. When asked about their influences, Snowshoe’s auteur Rahul Nadkarni says, “I listen to a whole lot of music, and I think the way those elements pass through you is hard to point out. Whether it’s old jazz tapes that played in my house while I was growing up, the wave of alternative music I got into after school, or a world of electronic music over the years, influences could come from anywhere really.”

Sky Rabbit: Their full length album last year was one of the best debuts we’d heard in a long time. Sky Rabbit have a five-track EP coming out by April, with songs we’ve been listening to at gigs long enough to know the lyrics by heart. Raxit Tewari, the band’s vocalist tells us, “We’ve recorded these songs over the last few months at our homes, and they’re being mixed and mastered at Ayan (De)’s place. All the songs were written in the jam room and we’ve tried to let that impulsiveness percolate into the recording.” Fingers crossed, hope “Sun Me Out” is on it.

The Lightyears Explode: “It’s like a late night party rock n roll thing,” says Saurabh Roy about the upcoming album The Revenge of Kalicharan. This three-piece from Bombay makes masala punk (that recently found its way to Bollywood soundtracks), and has a drummer whose day job is playing funeral gigs. This follow up to their 2011 eponymous EP is slated for release around the end of March.

The Bicycle Days: We’ve been waiting for this full-length album since we first heard Bangalore’s psychedelic/prog/electro rock(?) band The Bicycle Days over two years ago, on the heels of their EP 42. They’ve had a turbulent and transformative couple of years, with lineup changes, and shifts that have probably affected their sound. Vocalist Kartik Basker says about the album, “It’s massively different from the EP, considering it’s been two years or so that we’ve not put shit out. Music has become a way of moving on as an individual to the next thing that seems relevant. We’ve almost completely stopped caring about what is expected of us.” This release is due out around April, meanwhile check out their first work-in-progress track off it.

Adam and Fish Eyed Poets: More Songs from an Island? The mysterious Kishore Krishna explains the album, “It’s getting even colder; closer to the ideal i’ve been trying to achieve, but the songs have more time to breathe. I’ve tried not to be as rigidly efficient as the last two albums, but it’s still packed with the usual sly shit between the lines, and dense arrangements. I think the main difference is that it’ll be more of a solo record (likeSnakeism), rather than trying to force a band aesthetic which wasn’t really working out as I’d wanted.” The album was originally due out in December, “but I got sick of some of the songs, and music in general, so I had to discard and rewrite. That led to a lot of new material and the beginning of a completely different album/concept. If things go well, I’ll have two albums out by the end of the year.”