A connoisseur of uncharacteristic sounds, his songs often constitute isolated melodies and mellifluous shifts in texture. Almost instinctive and visceral, they comprise intervals redolent of trembling silences. While decorative embellishments and sparser textures, at times, adorn his compositions, one can’t ignore the free wandering spirit of Manuel’s sonic repertoire. There’s a strange echo of aural alchemies tethered to his sounds.

“I grew up on the West coast of France. Celtic heritage is very much a part of traditional music of Brittany. Breton bands are called Bagad which include groups of more than 40 people playing bagpipes and percussion. But I was never really into it,” he says. From a very young age, Manuel started collecting and learning musical instruments like sitar, bouzouki, mandolin and oud amongst others. On a trip to Thailand, he even undertook lessons from a local musician in order to learn how to play the phin — a traditional string instrument originating from Isan. “I had spent hours watching videos or listening to very raw stuff that culturally speaking I wasn’t supposed to relate to whatsoever. When I finally went to Thailand, I headed straight to the Northern side to meet an instrument maker whom I had befriended on Facebook. Over the years, I have employed quite a few different styles: all of them unpredictable. I tend to like persons and pieces of art that go against the grain. They challenge every prediction and find their own path. That way, Berlin is an amazing place to be. Here, everyday new artists come from lands far way leaving a lot behind to go against their logical development thereby daring to try newer ways. That’s probably why I could always relate to music that resulted from the hippie revolution, punk movement and early rock´n´roll,” says the artiste, “There were many such genres that were a part of social revolutions. But individuals and society as a whole have to be ready for change. If you want to know my opinion, the next big cultural change won’t come from Europe!” 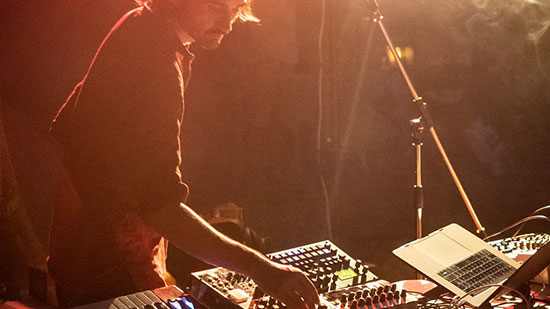 As former sailors, Manuel’s parents travelled across the world. While they were not interested in music, they always shared their enthusiasm for art. “I was lucky to follow them to many countries. Every time I travelled my interest in cultures and sounds that were not occidental grew,” says the artiste, “It’s difficult for me to answer what should be the simplest question for any musician — what kind of music do you create? I don’t want to be restricted by genres. Therefore, answering this question would be like opening Schrödinger’s box. As soon as the box is open, you can see if the cat is dead or alive. And, if you don’t, it’s still both at the same time. I try to create something with a strong identity. However, in the end, I’m just a reflection of what’s around me. We do nothing more than replicate the vibrations we receive. I like music that is true and not a product made to be sold or aimed at selling something. I like music that is somewhat extreme, that is full of devotion. I also like it when it’s a bit absurd, when artists don’t take themselves too seriously. Music that makes you feel like it’s getting you somewhere; guiding you to be a better version of yourself.”

In 2010, Manuel founded The Blondi’s Salvation — a psych-folk/rock band — alongside fellow musicians while studying film at the Academy Cinécréatis in Nantes. Drawing influences from several cultures including African rhythms, South Asian music and the psychedelic sound of the 60s, the band offers an unambiguous yet subtle musical canvas encompassing structures suspended in ambient melodic flourishes. While the band released their debut album ‘Crusades’ in 2014, it was in 2015 when Manuel released his solo album ‘Deamons’. Structurally reminiscent of folk, rock and psychedelia, both the albums strike a beautiful balance between immersive melodic moments and unconventional musicality. With his electronic music project World Wild Web, Manuel oscillates between experimental dance music, dub, African electronic sounds and acid house amongst other genres.

Exploring sculptural motifs with unorthodox sonic expressions, the artiste often delivers configurations that are crafted with rigour and emotion. “Music opens my mind towards understanding different ways of life and also helps liberate one from judgment. I don’t think it is my form of spirituality but merely a gateway that made it possible for me to meet some mindful and different people,” he explains, “To be honest, I don’t know what spirituality really means. I think you as an Indian have a more precise idea of what it is. In Europe, there is no culture aimed at teaching these things: you are either a believer or non-believer.”

Amidst elements of obscure and minimal sonorities, one often encounters unfolding decorative tones that illuminate different facets of Manuel’s musicality.

“Experimentation is a big part of what I do. I think it’s a good way to shape your own sound. Last year, I started working with Clementine Poirier who is a video artist in Berlin. Together, we created a video concert with footage we shot in Greece. We also experimented a lot trying to find out what was possible in terms of synchronisation and merging sound and pictures,” he explained, “It was really interesting for me to bring something else other than music to the overall performance. I’m looking forward to getting more involved with mediums of expression other than sound. After all, sound and light are both waves. They just operate on different frequency ranges.”

In conversation, Manuel mentions his friend who spent a few years in different mental health institutions seeking treatment for severe depression. He was lying on a bed unable to move a finger, recalls the artiste. His conclusion, he told Manuel, after all that time was that life is motion. “Being depressed, one slowly turns into a non-living thing like a stone or rock. Being alive is being able to move from one place to another: whatever you want to do, just do it. Keep going! Here, in Europe we might not be starving but somehow we are facing dark times. I see so many wonderful people around me turning into stone. I want to help them to move, to create motion and consequently life. You are a result of your environment. You are every interaction you have ever had. And your own identity (including your preconceived notions, background, etc) is what makes interactions with you unique and thus valuable,” says the artiste who hopes to return to the Dhrupad Sansthan in Bhopal in January. “I like to see musicians as wizards shaping the air by creating vibrations with their secret spells in order to make people feel the way they want, and sometimes shape the way they talk or dress, and thus their lives. Music definitely has a strong impact on individuals and society alike. I am just trying to make music that contains emotions; music that is alive…”