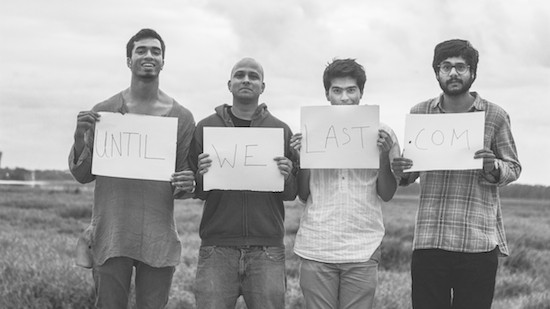 A few years ago, in conversation with drummer Steve Turncrantz (of Russian Circles fame), I learnt the futility of the term post-rock. Maybe the genre, baptized arguably by American explorers Slint circa the early 90s, had cast its last legion of influencers— you know kids with oversized hoodies and torn jeans, all flipping off the mainstream and swearing by their ‘cumulative timbres’ and ‘cinematic flourish’.

Here, in a seedless bar that befitted our dead-end drawl, I deducted that the free-form post rock movement was left, ironically, with no room to breathe.

It’s an enigma then, why Bengaluru’s Until We Last wears the post rock tag so proudly, if not champions it for an Indian audience. Drawing from modern marvels of the genre like God Is An Astronaut, This Will Destroy You and Explosions in the Sky, ringleader Ketan Bahirat defends the genre’s relevance and how it continues to inspire him:

“When you listen to powerful music which can inspire and let you create your own perspectives or emotions from a track, it does influence you to write more”

It takes grit to be prolific in the indie surplus and it’s not a task Ketan plans to botch. Given the self-exploratory roots of the genre, Ketan started Until We Last as a home studio project, resisting every urge to put out a claustrophobic, highly-compressed body of work. He soon recruited members Ralston D’souza (drums, percussions), Chaithanya Jade (guitars), Bhargav Sosale (guitars) and Anjan Bhojraj (bass) to prove his music’s dominance over a live audience, but what we hear on record today is just as staggering.

Until We Last’s debut EP ‘Earthgazing’ plays like arabesques —an otherworldly labyrinth of ambient passages and breaks. Opener “Creation” carves an unforgettable melody for every headspace, equal parts lullabic and anthemic, while the bold “Water” swells against your temples with its electro appendages. It’s almost as if the instruments converse with each other in perfect structure, posing the questions and birthing the script.

I. The Coven – True to post rock form, Until We Last is a strictly instrumental unit —just five storytellers in exodus, spilling ink through digital and analog. “One guitar set up includes a mix of analog and digital signals whereas the other is completely digital,” Ketan explains. “When we play live, we don’t have studio tricks or cheats in our set up. We’re playing most of it live apart from some ambient elements, and speech samples. Unless it’s absolutely impossible for one of us to play the part live we don’t use a laptop/backing track. It takes away the whole point of playing something ‘live’ on stage, and we prefer to keep things simple”

II. The Cause — Until We Last as a project has always been conceptual, but ‘Earthgazing’ is mindful of the grand apocalypse that both the band’s moniker and EP title tease. “The EP is about how humans are ignorant to a collapsing planet, and how easy it is to forget how amazing the Earth really is,” Ketan continues. “In these fast-moving times we never take back a second and enjoy what we already have. The tracks are about that emotion – of realizing that the Earth and everything living on it is all at one place, together.” Is this a prequel to a full-length? “Definitely.”

III. The Armory – If you’ve given the bands early singles like “Rain” and “To Space and Back” a spin, the unconventional quirks are all there, especially Ketan’s famed use of using the violin bow to get a drone-guitar sound. But surely a greater cause calls for another bout of invention. “For ‘Earthgazing’ we did some fun stuff, like putting the drum kit in a massive warehouse and recording natural reverb,” Ketan demonstrates. “Eventually, our live shows will have many more elements and we really enjoy experimentation. We’ve always thought of inventing stuff of our own, maybe make a DIY guitar pedal, or an effects pedal for live use but we haven’t really got to doing it. One day!”

IV. The Cavalry For as much as Until We Last is that ‘voice of post rock’ the subcontinent deserves, they’re still perfectly cautious of which avenues they tread. In light of their bold debut, the band has signed with Vital — a booking agency that fuels “some of the best artists in the country” like Sulk Station, Frame/ Frame and recent signees Soulspace. “Vital has been great for us!” Ketan exclaims. “We first met after our performance at Magnetic Fields Festival and had a casual chat about the possibility of signing. They represent our music perfectly and we’re just getting started — there’s a lot more to come!”