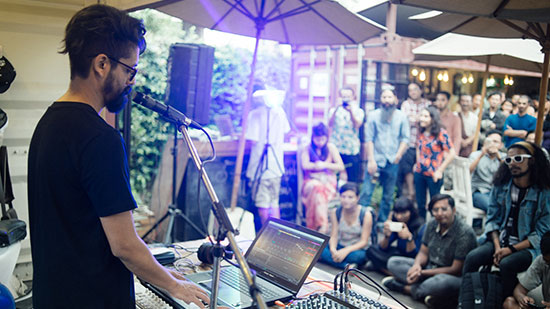 Kathmandu-based electronica artist Phatcowlee, a.k.a Rajan Shrestha, is not a fan of nightclubs. His friends once took him to a party at a club in Kathmandu and he found himself lost in a sea of noise. “It’s not that I’m unfamiliar with the nightclub scene here, but I just had an overwhelming sense of not belonging here,” says Shrestha. So, where does he feel like he belongs? “A bedroom? A room of people who actually care about electronic music? I don’t quite know yet,” he quips.

As one of the winners of the Border Movement Residency to take place in Berlin this year, Shrestha hopes the experience will help him find a) what ‘belonging’ in the electronic music community really means to him and/or b) the roots of electronic sound. It’s an emotionally ambitious order, but Shrestha doesn’t strike me as someone who runs from an opportunity to explore. After all, he’s been travelling across Nepal for a documentary series that explores the diverse cultures the country has to offer through folklore, mythology, livelihood and music. The upcoming series was a result of funding Shrestha and his colleagues received from the Prince Claus Fund and the British Council. The idea of mapping a culture through its sounds is very Vincent Moonesque, the founder of La Blogothèque on YouTube, who travelled the world in search of cultures and their sounds.

But Shrestha is no stranger to deep dives. He holds a degree in ethno-musicology and is deeply interested in sampling sounds from different landscapes and cultures. His debut EP ‘Cinema’, produced by Bangalore-based Consolidate, incorporates samples from Nepali movies. Although it offers no profound insight into the cinematic aspects of Nepal’s film industry, it points to Shrestha’s tendency to pursue thematically random ideas in electronic music.

Unfortunately, Kathmandu doesn’t appear to have a lot of room for this at the moment. Shrestha says, “There are hardly a bunch of producers interested in producing electronic music. Even among those, most of them limit their understanding of electronic music to EDM.”

When there aren’t many musicians working within this genre, creating an audience for it is an uphill task. But not for lack of trying. Shrestha, along with Daniel Panjwaneey, i.e. Alien Panda Jury, (who was a BMR resident last year) have been putting together a series of concerts in Kathmandu. They’ve also been hosting Sine Valley, a festival purely dedicated to electronic music for three years in a row. “Last year it was just me, Danny and a couple of musicians doing a set after another for seven days in a row,” he laughs. “I really wish we had more company.”

Building a music appreciation culture, specifically for electronic music, is also high up on his agenda. “What better place to take notes on how to do this than in Berlin, that has a thriving culture of electronic music?”, he questions. And yet, he’s not entirely sure how he’ll react to it considering he’s not used to a thriving music culture. But there’s a strange loneliness that comes with having very limited sounding boards to electronic experiments. Perhaps Berlin could give him respite from that? “Yeah, it can get a little lonely doing this stuff here. I’m more than happy if I get to play to a crowd of ten attentive listeners, you know?” he adds.

Phatcowlee does welcome these limited moments of respite in Kathmandu through smaller concerts. He recently played a gig with Sofar Sounds Kathmandu and found dead silence in the attentive crowd. Shrestha is no stranger to an attentive audience, but he still found the experience fairly unnerving. As a bassist for the post-rock band Jindabaad, he’s had more than his share of the sumptuous rock and metal-loving scene in Nepal. But it is as Phatcowlee that he truly expresses himself. He elaborates, “I have a lot of things to say and I find myself thinking and saying things more comfortably through electronic music.”

His self-expression, however, does not limit itself to sound. His work as a videographer and photographer in his day job seeps into how he visualises his music. He plans to use the visual research for the video series mentioned earlier to interpret his music visually. Taking pictures help him make better music and vice versa. I’m fairly curious to see how he applies his visual experience at BMR to Phatcowlee’s dysphoric tunes. He’s working on releasing a single and a video to go with it later this year.

But above all, Shrestha is eager to traverse his way to the root of electronic music. Hopefully, he’ll also find a sense of belonging to go with it.