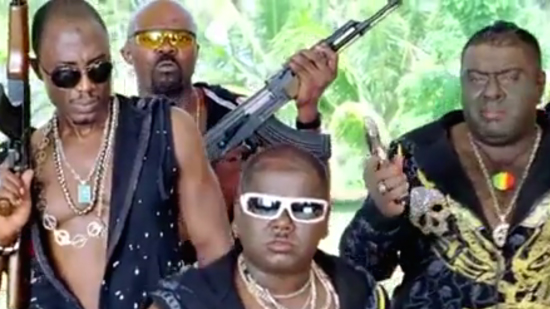 However, at the same time, South Asian families were one of the chief proponents of racism against the Black community – opting to distance themselves and buy into the model minority narrative that was being sold by (and to) white communities in the 70s and 80s. The practice still continues to this day – manifesting itself in South Asian and Punjabi popular culture. ‘Jatt and Juliet’, the film that launched Punjabi icon Diljit Dosanjh’s film career, is a prime example of how deep-rooted the South Asian community’s racist outlook was. In the movie, Dosanjh, while coveting and trying to woo a white woman, breaks off the relationship when he learns that the girl in question is moving to Africa to be a part of a charity program. The scene is depicted with Dosanjh imagining his future children in blackface – showcasing borderline minstrelsy behaviour.

The irony is that Dosanjh’s public persona was built co-opting the image of African-American hip-hop, R’n’B and fashion icons. Couple this with an increasing trend in racist violence towards African nationals exemplified by the recent death of a Congolese man in New Delhi and the public stripping of a Tanzanian female in Bangalore. With the country’s growing appropriation of Black culture, it’s hard not to question the moral validity of our society repackaging and commercialising it for the Indian masses. How do we equate the commercial appeal of the co-option of Black culture with the hate crimes and racist outlook towards people of colour from Africa? Where do we begin to address the career of someone like Diljit Dosanjh – a young Indian icon who has relied on co-opting African-American fashion and music yet doesn’t raise his voice about a racist scene in one of his biggest movies? 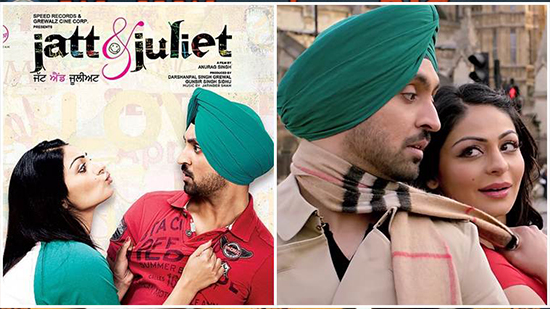 “I think a lot of South Asian artists are influenced by Black culture because the Black musical culture in our youth was always the ‘other’,” said Chippy Nonstop, a DJ, producer, artist and multi-hyphenate who currently resides in Toronto (and recently published this public apology via Twitter). She went on to explain that, “when growing up in North America, we weren’t given examples other than black or white and if ‘the white’ was the norm and ‘the black’ was ‘the other’ then clearly, we felt more like ‘the other’.”

“The problem in India, I think, is that the question doesn’t even pop into peoples heads,” Diya Gupta, cultural critic and former lead writer at Wild City explained. “To Indians, appropriation is something that happens to us, not something we do to other communities – which is entirely false. Brown people, particularly those of us who are active in the music scene, have appropriated and fetishised a ton of cultures.”

This fetishisation of other cultures is where problems arise. As African nationals are killed for the colour of their skin throughout India, as skin-whitening creams continue to push the narrative that the darker you are, the less attractive you are, the culture surrounding Blackness, and its many variations is elevated in our arts. Black culture becomes a novelty item, a facade to drape over ourselves for a night, a culture to continue to exploit and gain from monetarily while staying ignorant to the plight of those who live with everyday racism. 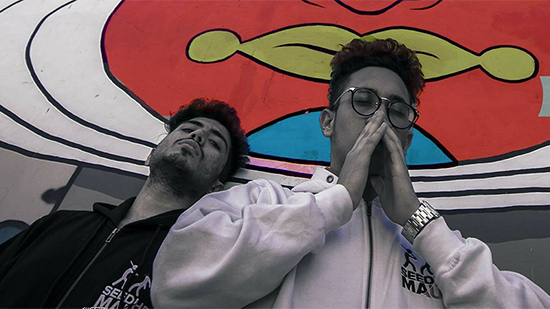 Image: Seedhe Maut – Calm – “The use of the n-word is pretty frequent in my circle.”

Gupta, who has just spent a year living in New York City, found that the use of the n-word is frequent within her circles in India but not so much in America. “Yes, I found that particular derogatory term used quite frequently by scene people,” she professed. Calm, an up-and-coming rapper part of the duo Seedhe Maut, echoed the sentiment by revealing, “The use of the n-word is pretty frequent in my circle. The people around me do use the word but they never overdo it. They know when to stop and to not disrespect anyone.”

It’s not like we’re living in a world bereft of discussion about these topics. Our knowledge of both history and race-based issues is expanding quickly. We’re having new conversations, in real life and online about it every single day. In a world still attempting to find its feet after generations of colonialism and oppression, being South Asian is finally starting to have its own identity, except due to years of conditioning, a lot of South Asian people still equate the struggles of being Brown with those of being Black. The weight of history on the shoulders of Brown people is different to what Black people have had to suffer; they’re both equally important but each is a battle the other hasn’t had to face.

While a lot falls under the ‘Black culture’ umbrella (hip-hop, AAVE, jazz, reggae, clothing), where do we draw the line between cultural exchange and cultural appropriation? The spread of Black culture has been facilitated by its commercial appeal and the emergence of globalisation as the world’s dominant policy. At the same time, social stigmas around the world surrounding the African community failed to keep up, thus leading to the adoption of hip-hop culture while rejecting the community that created it. In this global exchange, education and context regarding the Black community’s experience have been lost – which in turn has led to the development of an ignorant adoption of Black culture.

Lil Littlez, real name Sohail Rana Kanwar, is a rapper whose recent release, ‘Kurt Cobain’ along with its video received a lot of pushback online. Having lived in Atlanta for the last three years, he feels that it is “inappropriate to use the n-word anywhere in the world. Sure it is something you hear around every now and then, but I wouldn’t say it is a part of my daily conversations.” Yet in his ‘Kurt Cobain’ video, he talks about “sipping lean”, rapping with grillz on, and putting on a persona that’s very different to his own. Asked what inspired his choices, to so clearly appropriate a culture that isn’t his while shooting the video in one of the most affluent parts of New Delhi, Vasant Kunj, Kanwar aka Lil Littlez explained, “The lifestyle and personas of my favorite artists, and to an extent a reflection of some of the more enjoyable moments in my life.” 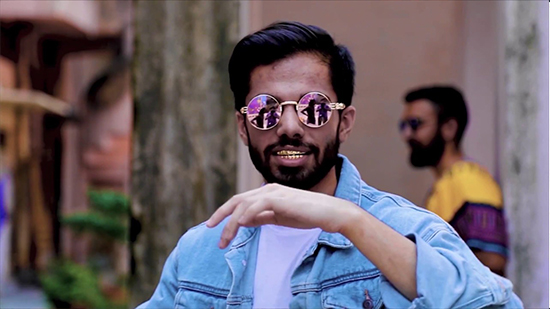 Image: Sohail Rana Kanwar in a still from ‘Kurt Cobain’

He went on to state that, “cultural appropriation, as far as I know, is adopting something from a culture that is not one’s own. The concept usually has negative connotations to it, such as disrespecting another culture and even portraying a minority in a negative light. I firmly stand against anything of this sort, as I feel every single culture should be appreciated and respected for what it is. Cultural exchange is something that is special, whereas cultural appropriation is something that is not. For me, that’s where you draw the line.” For Kanwar, the song itself “is essentially about balling out, having a good time, and achieving a state close to that of nirvana through music and other stuff.” Artists like Kanwar do not seem to see the transparency through which they’re profiting from Black culture. It’s all well and good to want to do something that honours your heroes, but not at the expense of what is theirs.

Brown artists, and by extent our people, are treating Black culture as a novelty item without even realising it. We’re conditioned into exploiting the culture for our own gains. Calm of Seedhe Maut echoed this sentiment by stating, “I’ve heard the word so much, it doesn’t bother me if someone uses it in front of me. I have felt uncomfortable too at times when there was a cypher going on and a guy used the word more than a couple of times in his verse.” And when people like Diya Gupta and Chippy Nonstop have called people out on it, they’ve been met with anger or pushback. Gupta elaborated, “they mocked me for being sensitive and touchy” while Chippy lamented, “I’ve told some people of colour and they usually try to justify it or say to me, ‘you’ve probably said it too.’”

Therein lies the problem: because we think or know of other Brown people using the n-word or appropriating culture, we automatically do it too. When we aren’t taught about the anti-Blackness that runs through the veins of the subcontinent’s history, it’s easy to perpetuate the cycle; to repeat the mistakes of those that came before us. The very people (Gandhi) that fought for freedom from the British were for the enslavement of, or turned a blind eye to the suffering of Black people. Schoolbooks and our education system don’t allow us the opportunity to learn of the suffering we’ve inflicted on others. All the individuals we interviewed for this article said they don’t remember learning about these factors in school. 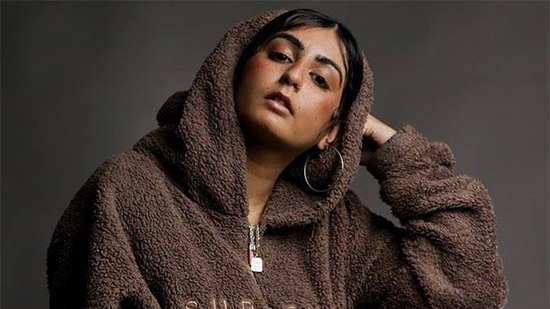 Image: Chippy Nonstop – “if ‘the white’ was the norm and ‘the black’ was ‘the other’ then clearly, we felt more like ‘the other’.”

We view our own history in South Asia through the lens of whiteness. Postcolonialism has that effect; it’s ubiquitous in countries where for hundreds of years, the oppressor will condition the oppressed. We continue to view the present through it too: generations of immigrants in white-dominated countries or in the subcontinent itself grew up attempting to fulfil the role of the model minority, we cast ourselves into the role of the persecuted and suppressed, aligning ourselves with African Americans and Black people, while anti-Blackness remained prevalent throughout the subcontinent’s core. But in a day and age where this discussion should not be a debate, profiting from a culture through appropriation, especially by using the n-word is inexcusable. “It’s 2018, we all have access to the Internet,” said Chippy Nonstop. “If we are putting out music influenced by Black people it is also our responsibility to know the history of the music and the people who made it. Not all people of colour have the right to use the n-word. It’s 2018 and we should know that by now.”

This may be a low priority considering the issues the subcontinent has to face at the moment. But as Gupta commented, “We’ve got so much to learn about the people in our own neighbourhood. Maybe it’s less to do with learning about a particular community and just talking to each other about respect and equality in general. India has a long way to go with discussions about race, inequality and structures of power. I think the first step is asking questions and just speaking up.”

There are no true solutions to this. We have the power and have to be wary of how exactly we plan on using it, either for the benefit of ourselves, leaving others exploited and bloodied on the ground; or in a way that is mutually beneficial to everyone on a level playing field which we haven’t seen before.