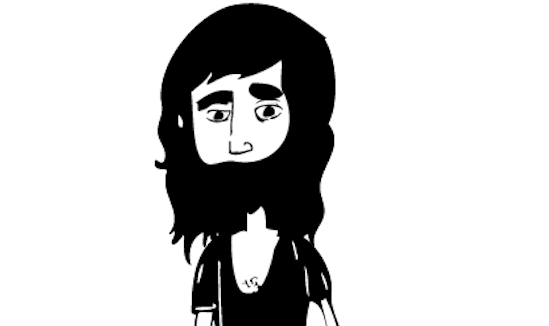 But although new-to-the-scene Pippin Pip seems to be an illustrated beatsmith, we hear rumours that the pen-and-ink producer may have a Delhi electronic music veteran whispering production tips into his animated ears.

But for now, all we know about Pippin Pip is what his production set-up looks like.
So putting the man (Woman? Child? Drawing?) aside, what about the tunes?

Pippin’s recent remix of Chet Faker’s I’m Into You shows a great deal of restraint, reframing the already plaintive ballad to reach new degrees of mellow. A gentle synth wash and lounge-friendly drum programming accompany a mild delay selectively applied to the main melody line, adding to the dreamlike quality of the song. Truth be told, the Pippin Pip remix isn’t really that far removed from the original track. But the minor tweaks he makes sound not like a remix, but how the song might have been produced had Chet Faker worked with a more electronic minded engineer.

Pippin’s other recent outing, a remix of Border Movement favorite Sandunes’ Runnin w: Claws, take an opposite tack to his Chet Faker remix. Though similarly eschewing any grand transformations, Pippin stretches the tracking out, bumping the energy of the original up a notch, overlaying a stuttering vocal sample, and bringing in a more dancefloor friendly break to play under Sandunes’ clean melody lines.

Pippin Pip’s remixes are subtle, but expertly crafted. We’re eager to hear how he sounds when he applies his skills to crafting original tunes for our earholes.